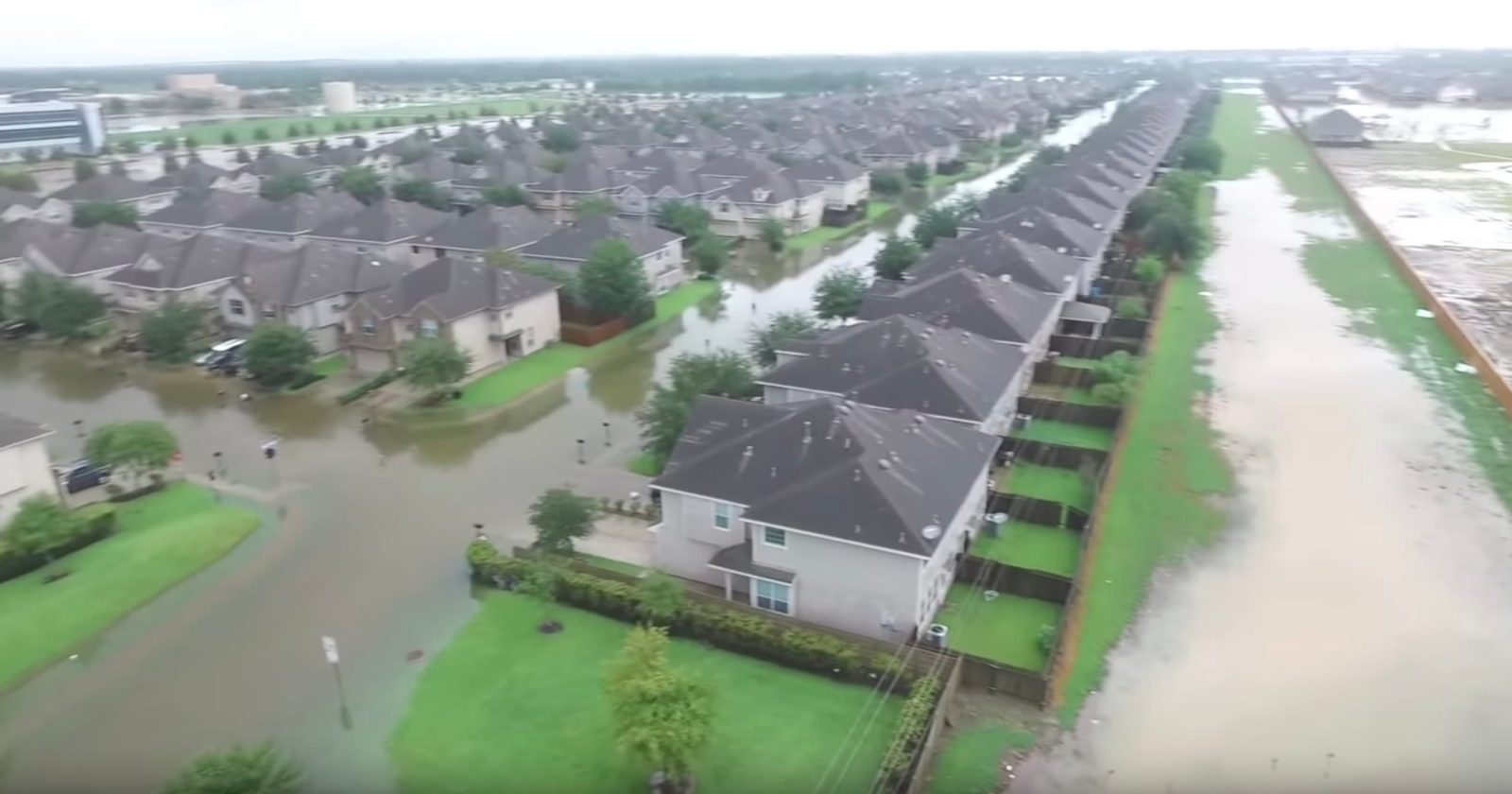 Many people are sharing photos and drone footage of Hurricane Harvey and the damage it has caused in the Houston area. We have all seen the smart phone images and videos of wind damage and flooding over the last few days. However now with affordable amateur drones widely available, we are seeing many drone footage of the Houston flooding shared through social media and uploaded to Youtube. We have listed a few below.

These videos show the extent of the flooding and damage caused by Hurricane Harvey. Because of their elevated view point, the drone footage is much more effective in showing the widespread flooding and extensive damage done to homes and businesses. Smart phone footage simply doesn’t compare.

Even though Hurricane Harvey is very different from Hurricane Katrina and Sandy, people are drawing comparisons between them. Some even believe that the damages from Harvey may even eclipse those from Katrina, which caused $108 billion worth of damages in 2005.

Drone footage of flooding helpful or not?

This brings us back to the discussion about amateur (and professional) drone video footage of disaster stricken areas being helpful or getting in the way of rescue operations. Documenting disasters and the damage caused by them is useful but people need to seriously consider their own safety as well as that of others around them. If your drone flying is getting in the way of professional rescue operators doing their job and trying to save other people’s lives than you have clearly crossed the line.

Both the FAA and the Texas Military Department have issued warnings and have asked people to not fly their drones in the Houston area. Please comply with these instructions. If you do decide to fly your drone regardless of these warning, then please be extra careful and make sure you do not endanger other people’s lives or get in the way or rescue workers.

What can I do to help?

If you would like to help the victims in the Houston area, you can for instance:

Donate to The Red Cross who are hosting people in shelters in Texas. You can call 1- 800-RED CROSS or text the word HARVEY to 90999 to make a $10 donation. You can also make donations directly online. Donations enable the Red Cross to prepare for, respond to and help people recover from this disaster.

Donate to the Salvation Army. They are deploying mobile kitchens in Oklahoma, Arkansas, and Texas. Every mobile kitchen can supply around 1,500 meals per day. The Salvation Army prefers monetary donations over food or goods. You can donate on their website as well as by phone at 1-800-SAL-ARMY.

Donate to United Way. A special Harvey recovery fund has been set up by Houston’s Chapter of community support organization United Way. You can donate online here. You can even decide in which counties the money will be used.

Description: Drone video of Brays Bayou in Houston Texas on August 27, 2017. Taken during a break in the rain associated with tropical storm Harvey.

Description: This is near i45 in League City Texas near 518 and Nasa road 1

Description: Hurricane Harvey slammed into Texas over the weekend, bringing wide-spread flooding, power outages and severe destruction. Drone footage, while providing a unique birds-eye view to the damage, captured the severity of the flooding in and around Houston. As of Monday morning, FEMA (FEE-MA) Administrator Brock Long said he expects the storm will drive about 30,000 people into shelters, and 450,000 people will seek some sort of disaster assistance…though he warns that number could easily fluctuate. Around 13 million people are under flood watches and warnings stretching from Corpus Christi to New Orleans, according to CNN.

Description: Hurricane Harvey is leaving a path of destruction and ruins as it moves through Texas. In the town of Rockport, Texas several homes and buildings were destroyed.