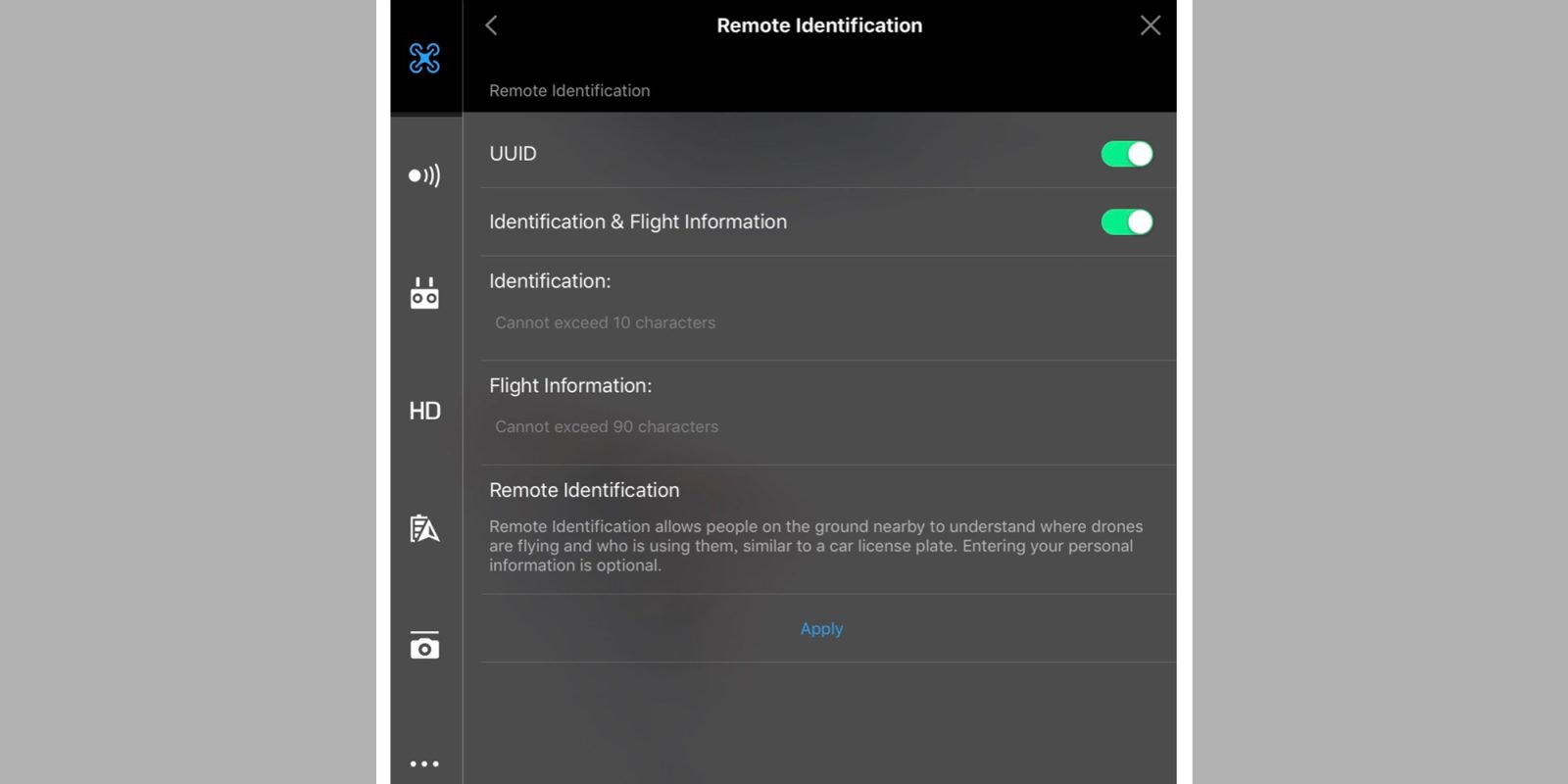 Chinese drone manufacturer, DJI just announced today that they will be adding new identification features to their “electronic license plate” for drones system, Aeroscope. Aeroscope is a system that remotely identifies and tracks airborne drones, allowing law enforcement and aviation safety officials to respond to safety and security concerns about drones. The new additions allow drone operators to voluntarily identify their drone and drone flights to law enforcement agencies. The new features are available in the DJI GO 4 app and as of now work only with the Mavic Pro.

Based on the photo released by DJI it seems that a UUID (A universally unique identifier), as well as Identification & Flight Information, can be turned on individually. Lower in the same screen identification and flight information can be added.

Aeroscope was launched in October of this year in both Brussels, Belgium and Washington D.C. Even though it is the only system of its kind and no other drone manufacturer has introduced anything similar, Aeroscope has received its share of critique.

Here is the official press release from DJI:

December 1, 2017 – DJI is introducing new features to the DJI AeroScope remote identification system that functions as an “electronic license plate” for drones. The new features allow drone pilots to voluntarily identify their flight operations to authorities while still protecting their privacy.

AeroScope is a system that remotely identifies and tracks airborne drones, allowing law enforcement and aviation safety officials to respond to safety and security concerns about drones. DJI drones locally broadcast their location, speed, heading and serial numbers to AeroScope receivers used by authorities at sensitive locations or in response to complaints. However, they do not broadcast personally identifiable information.

Recent updates to the DJI GO 4 app and DJI drone firmware, made available first for the DJI Mavic Pro last week, will allow pilots to choose whether or not to broadcast additional information about their flight operations, if they believe it will be helpful to ease any concerns about their flights. Professional pilots and pilots who fly near sensitive locations may choose to do this routinely.

Once updated, the DJI GO 4 app will display a “remote identification” menu in the main controller settings. This menu gives pilots the option to broadcast their “UUID,” a unique user identification code tied to each pilot’s DJI GO account, and “Identification & Flight Information,” if a pilot chooses to enter information into them. The default setting for both options is to not broadcast them, and these settings can be changed at any time.

AeroScope addresses the needs of authorities who know that most drone flights are harmless, but who are concerned and must be vigilant about tracking risky or illegal drone activity near airport runways, prisons and other sensitive locations. AeroScope also provides authorities with a tool to respond to complaints about individual drone usage and to investigate further.

DJI developed AeroScope to balance the legitimate needs of authorities against the privacy rights of drone pilots. AeroScope uses the existing communications link between a drone and its remote controller to broadcast identification information up to 5 km such as a registration or serial number, as well as basic telemetry, including location, altitude, speed and direction. Police, security agencies, aviation authorities and other authorized parties can use an AeroScope receiver to monitor, analyze and act on that information.

Because AeroScope relies on drones directly broadcasting their information to local receivers, not on transmitting data to an internet-based service, it ensures most drone flights will not be automatically recorded in government databases, protecting the privacy interests of people and businesses that use drones. This approach also avoids substantial costs and complexities that would be involved in creating such databases and connecting drones to network systems.

DJI is working to expand the broadcast protocol for other drone manufacturers.

Governments around the world have expressed interest in requiring mandatory tracking and identification of drones. DJI has led the drone industry in arguing against proposals to require all drone flights to be tracked and recorded in government databases, many of which would require drones to be modified with special equipment that would add weight to drones, drain battery life and impose costs on drone pilots.