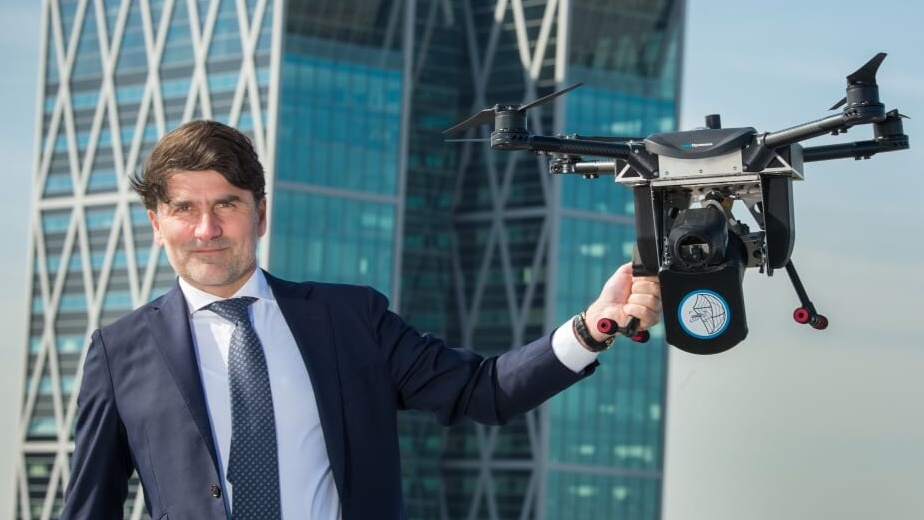 Paul Riemens, CEO of the RAI Amsterdam convention center, has launched the ‘Amsterdam City of Drones’ initiative in parallel with this week’s Commercial UAV Expo Europe. “RAI Amsterdam aims to be more than an event organizer in this context,” says Riemens. “Our goal is to provide a platform for knowledge, contacts and innovation as we aim to make Amsterdam the drone capital of the world.”

Riemens sees it as entirely logical that RAI Amsterdam takes the initiative to bring the relevant participants together. “The drone industry is growing enormously, and we are seeing major opportunities to contribute to this by facilitating discussions, innovation and contacts,” he explains. “New European regulation for drones will be introduced in 2019, giving the sector a huge boost. A great deal is already possible in technological terms, and the coming years will show what businesses and organizations are willing and allowed to do with these new technologies, taking issues of privacy and safety into account. With its focus on education, innovation and technology, the city of Amsterdam is a perfect base to bring all these aspects together. Moreover, RAI Amsterdam has a huge network on which we can draw.”

As the former CEO of the Dutch air traffic control center Luchtverkeersleiding Nederland, Riemens has an important personal contribution to make. He also previously chaired the Civil Air Navigation Services Organisation (CANSO), the global umbrella organization of air traffic controllers. “Based on my prior experience, I have an understanding of how the use of drones could be regulated. The safety of air travel is a major issue.”

Riemens has also mobilized his contacts within the European Aviation Safety Agency (EASA) and the Dutch Ministry of Infrastructure and Water Management. Both parties will take part in the EASA High-Level Conference on Drones during the Amsterdam Drone Week later this year, supporting the ‘Amsterdam City of Drones’ initiative.

In addition to the knowledge and innovative power of the Amsterdam area and the active involvement of the RAI, Amsterdam’s location and its infrastructure provide major benefits. The city is easily accessible via Schiphol Airport, and has excellent public transportation, first-rate hotel facilities and plenty of opportunities for social and educational programme components. “The attractiveness of a city is always a key factor during the organization of events,” Riemens emphasizes. “This is another reason why Amsterdam is a logical choice as a hub for the drone industry.”

Several activities have already been programmed in 2018 under the aegis of ‘Amsterdam City of Drones’. For instance, Commercial UAV Expo Europe, which will take place at the RAI on 10-12 April, is a pan-European event focused on the industrial use of drones in contexts such as security, infrastructure and agriculture. After a successful beginning in Brussels in 2017, the organizers chose to bring the second edition to Amsterdam.

From 26 to 30 November 2018, a range of activities in the field of drones will be hosted by the RAI under the flag of Amsterdam Drone Week (ADW). This business-to-business platform is intended for all companies with operations in the UAS (Unmanned Aircraft Systems) sector or those who professionally deploy the relevant technology. The various activities will focus on technology, applications and factors such as privacy, regulation, safety and security.

EASA will also organize its High-Level Conference on Drones 2018 together with the Ministry of Infrastructure and Water Management during ADW. ADW invites all start-ups, regulators, corporations and academic institutions to contribute ideas and initiatives.

“There is an obvious synergy,” Riemens concludes. “Until now, most drone events were local and aimed at consumers. With this initiative, we would like to create a platform on a global scale, helping the sector develop as a whole.”