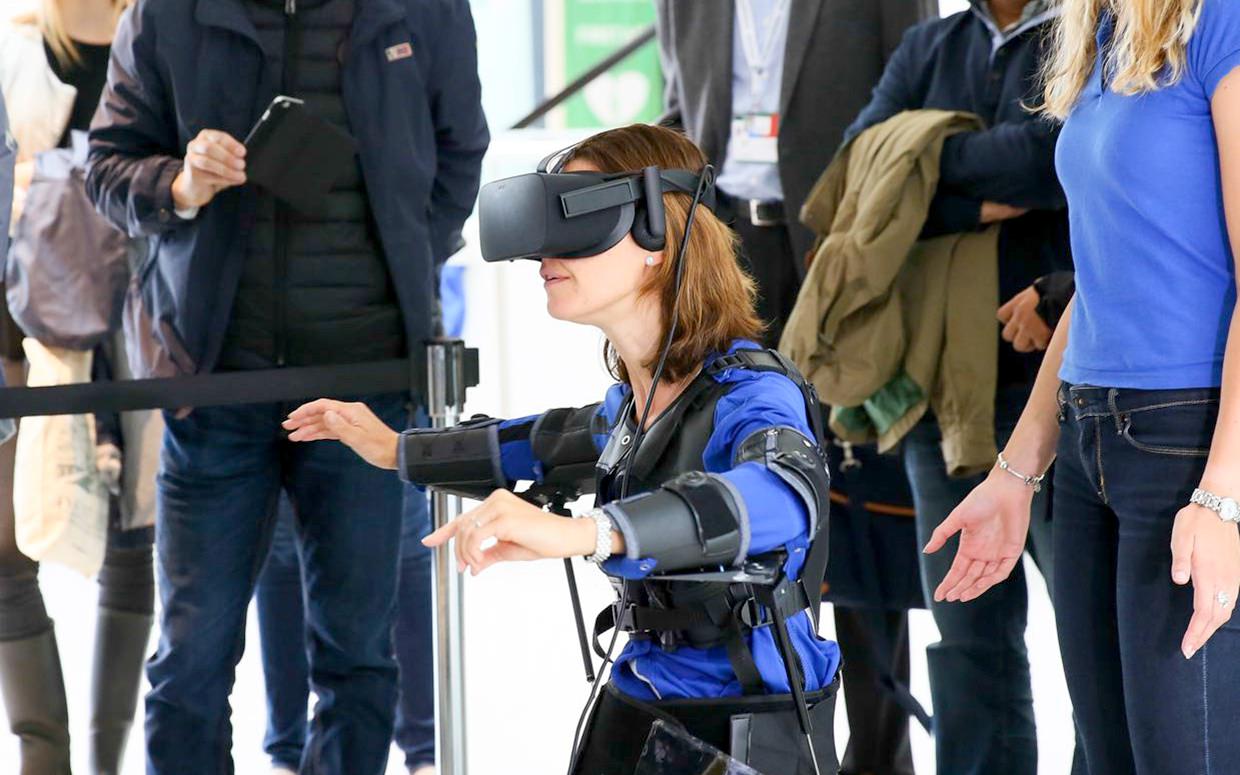 Have you ever found flying a drone too overwhelming? Are the controls too complicated or simply not intuitive to use? Well, the team of the École Polytechnique Fédérale de Lausanne University (EDFL) in Switzerland has got the solution for you. It is called the upper-body soft exoskeleton, FlyJack and it allows you to control your drone by moving your torso and your arms. Yes, it may look funny but… it promises to make flying your drone feel a lot more natural.

FlyJack lets you control your drone with your torso and arms

The team from the École Polytechnique Fédérale de Lausanne University has come up with the upper-body soft exoskeleton called FlyJacket. When you put it on in combination with a VR headset, you can control a fixed-wing drone in the most natural and intuitive way possible, namely with your body. You simply stretch your arms out like wings and you can pitch and roll the drone by moving your body. Especially with the VR headset, flying your drone may have never felt this immersive.

“Drones need training and dexterity to be well controlled, which limits their use to highly trained users. Therefore, we wanted to make the interaction between drone and human more natural and intuitive in order to create a symbiosis between them,” Carine Rognon one of the EPFL team members said in an email interview with IEEE. “The idea was to go further than just improving the interaction by achieving an embodiment of the human in the drone. To do so, we wanted a device that is directly mounted on the skin and close to an object of the everyday life. The experience starts when you put the FlyJacket on as it gives the feeling to wear a superhero suit. As the drone control is very intuitive, [the] user is directly immersed into the flight and can directly start to explore the environment. You almost instantly become embodied to the drone,” she added.

The exoskeleton suit helps you to fly smoother and more consistent

Even though it may not look like it, the FlyJacket is actually designed to be portable and affordable. It doesn’t require much in terms of training because it is so intuitive. The suit is designed to support your arms so that longer flights remain comfortable. The FlyJacket has a number of sensors built-in that detect motion. You control the pitch of the drone by bending your body forward or backward. You roll your torso to roll the drone into a turn. Interestingly, you do not have to keep your arms stretched out at all during these movements. The suit is only designed in such a way because people instinctively stretch their arms out when they are pretending to fly.

The team found that one benefit of the FlyJacket is that it helps people to fly smoother and more consistent. Researchers believe that the haptic feedback you experience from the drone through the suit, help a great deal to achieve this. Regular controls simply don’t provide that kind of feedback and don’t create that experience. So, as funny as the FlyJacket may look, it seems to provide some real benefits.

What do you think about the FlyJacket? Do you see some real-life application for an exoskeleton suit like this? Let us know in the comments below,