Ever wondered how to take your DJI Mavic Pro with you on a motorcycle? Check out this custom “Goldrush Bike” 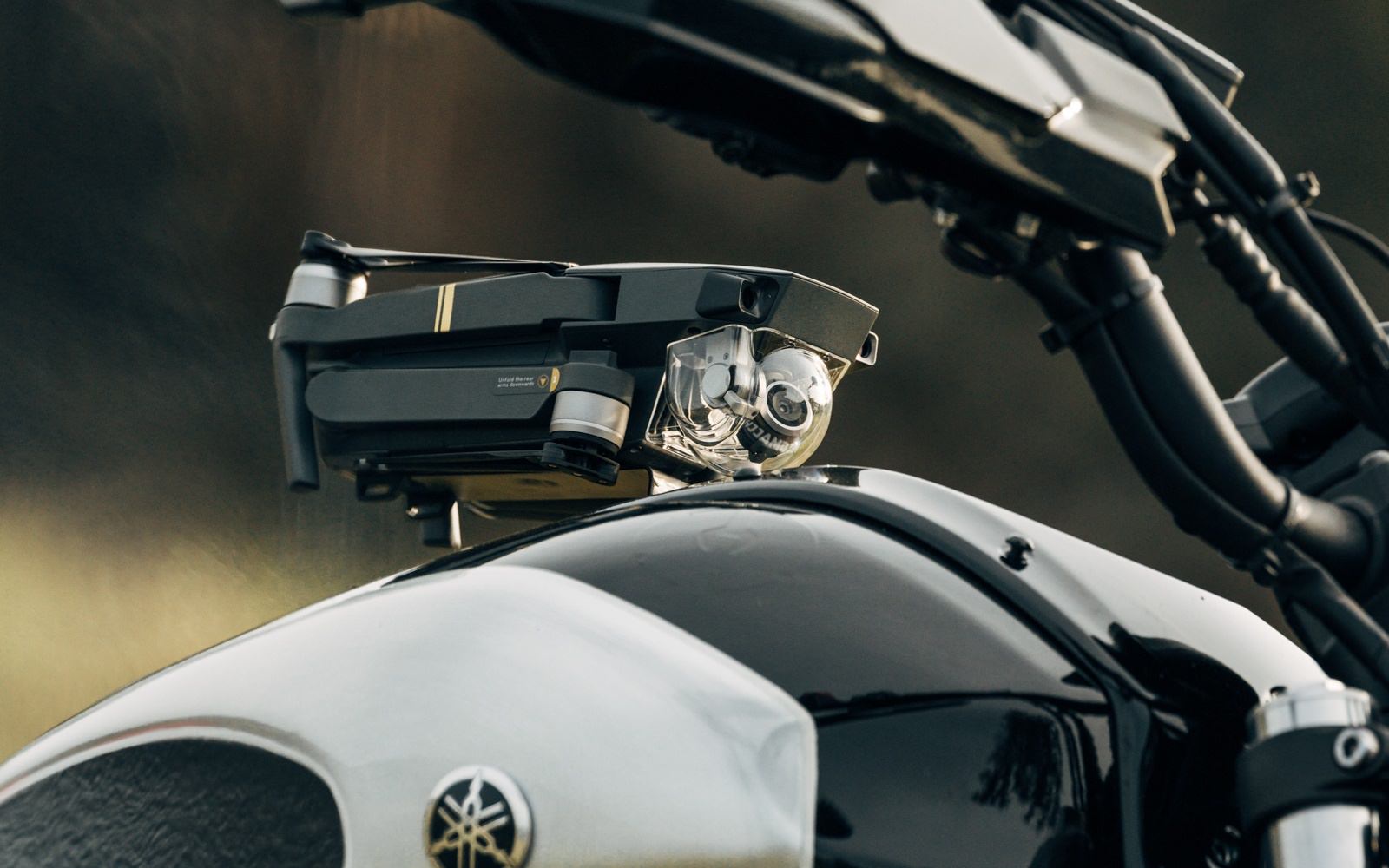 If you have ever wondered how to bring a DJI Mavic Pro drone along on a motorcycle, well, in that case, you may want to check this out. Recently Yamaha approached Kevin Murray, founder of Velomacchi in Hood River, Oregon to customize an XSR700. Murray and his team set to work and together with brands like DJI, Yoshimura, Champion and Race Tech they created the ultimate “Goldrush Bike” including a custom solution to carry your DJI Mavic Pro. Velomacchi specializes in creating backpacks, duffel bags and other accessories for adventurous motorcyclists.

Chinese drone maker, DJI has been working together with Kevin Murray and his team from Velomacchi in Hood River, Oregon to create a custom “Goldrush bike” based on the Yamaha XSR700. Velomacchi tuned and customized the bike to have it meet adventurous riding style, and cargo-carrying capabilities, required for backcountry riding in Oregon. In short a bike ready to take on the three-day Goldrush Ride.

“My first thoughts on the XSR700 were that it would be an excellent platform to build a Goldrush Bike,” says founder Kevin Murray. The Goldrush Ride is a legendary hooligan event put on by a Portland-based riding club called the Sang Froid Riding Club or SFRC. It is an epic 3-day riding event ripping through the backroads of Eastern Oregon to the old gold mining township of Sumpter. It is the type of ride that you begin as friends and end as brothers and sisters. As soon as you and your fellow riders finish breakfast at some Portland dive bar, your competitive instincts take over and you push yourself and your machine to ride at the peak of your abilities through harsh conditions, rural roads, limited gasoline stations, tar snakes and kamikaze deer. You have to be prepared for anything,” says Murray. “Self-reliant so you can take care of others who invariably break down, wipe out or run out of gas.”

The bike dubbed the Velomacchi Rural Racer underwent a series of substantive modifications. First, they stripped it down and then, with the help of companies like Race Tech, Yoshimura, Champion Tool Storage, and DJI, built it back up again to a motorcycle ready to take on any adventure.

“Kevin and I have been talking about a heritage-inspired modernized rural race bike for years; our two brands share a lot of common values and we have both born witness to how this industry is changing, ” says Shun Miyazawa, Yamaha Motorcycle Project Manager and Rural Racer Project collaborator. “The Rural Racer XSR700 keeps the heritage-inspired vibe people love, while also delivering 21st century technology and unrivaled performance.”

The one thing that stood out to us right away was the tank-mounted DJI Mavic Pro drone. The drone is positioned in such a way to provide the least possible interference for the rider, while at the same time having the drone ready at all times to scout sections of less-traveled rural roads, find the next campsite, or capture unparalleled footage of your favorite rides. Of course, an ordinary tank bag would provide an alternative solution but not as sexy and clever as this.

“We wanted to build a bike that spoke to the modern urban dweller who uses their bike to both commute to work and escape on the weekends,” says Murray. “That’s why the Rural Racer XSR700 is as beautiful and heritage-inspired as it is modernized with technology solutions like drone carry, facial recognition, and precision engineered parts from some of the top component brands in the world.”

What do you think about this tank-mounted drone solution? Let us know in the comments below.