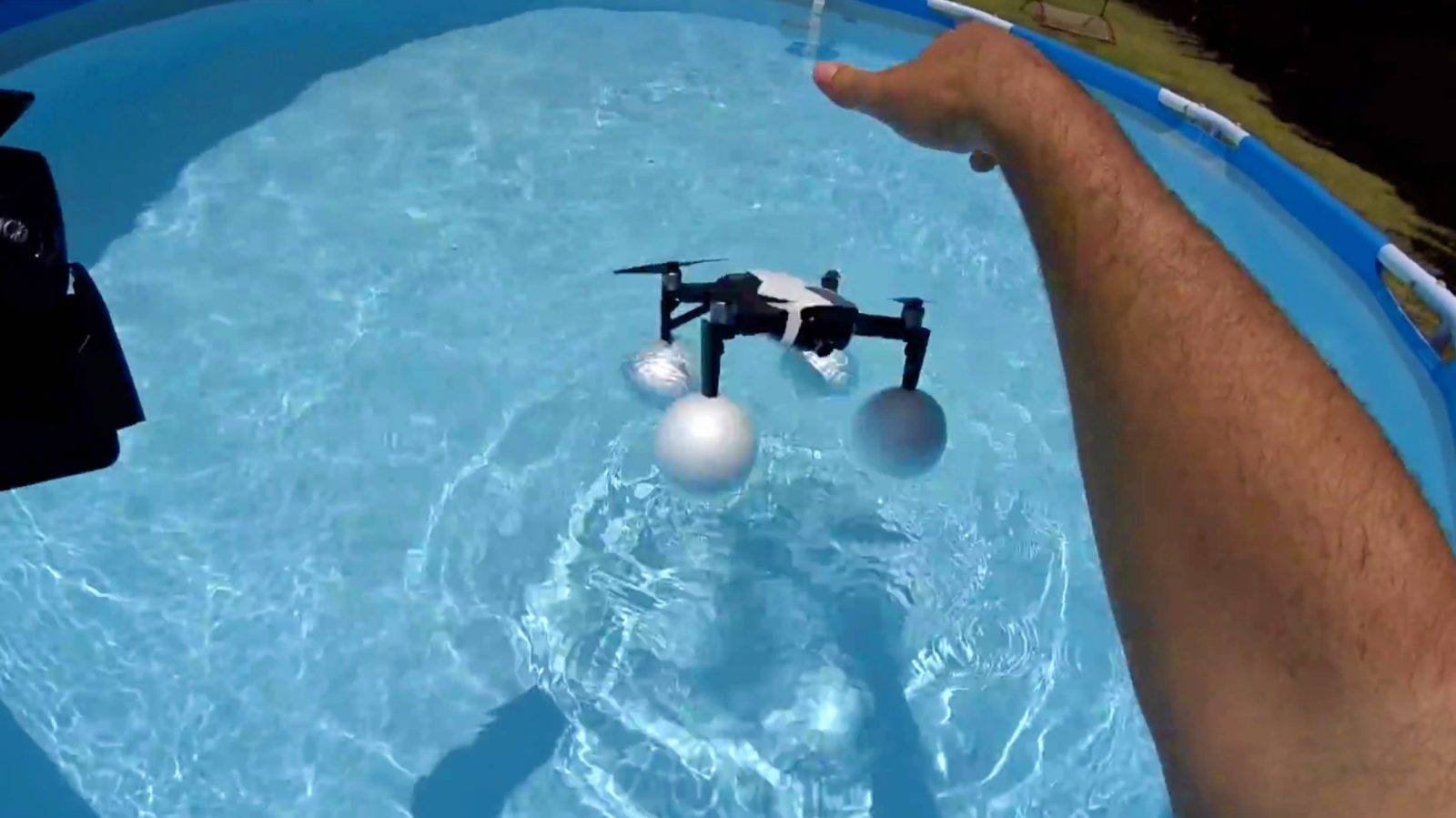 Check out this video from Dustin Dunhill in which he tests the RCGeek water landing gear for the DJI Mavic Air. The set consists out of four leg extenders and four foam balls that will allow the drone to land on water in case you run out of battery. During Dustin’s test, it is actually pretty windy and you can clearly see how the four foam balls negatively affect the Mavic Air stability during flight. The water landing gear obviously makes the foldable drone a lot less aerodynamic.

So, that was pretty stupid of me!

Dustin shows how you can successfully land the Mavic Air on water using the water landing gear and the drone seems to be pretty stable initially. However at this point in the video, when he pushes the drone down too much and it bounces back up and flips backward. Dustin tries to save the drone but he is too late and the Mavic Air is fully submerged for an instant in the fresh pool water. The maker of the video explains how he dries the drone – shake it, let it sit in the sun and use a hairdryer to blow out any remaining water – and after a few hours, he is able to fly the Mavic Air again, seemingly without any lasting damage as a result of the short submersion in the backyard pool.

In the video Dustin continues to show the Mavic Air landing and taking off from the water in various modes and he points out how after a software update from DJI, you are now able to cancel a landing procedure once it has started by simply pushing the left stick forward on the controller, sending the drone upwards. In a previous test where Dustin used a Mavic Pro, this was not yet possible and it caused him to lose that drone.

If you are interested in possibly buying the RCGeek water landing gear for you Mavic Air, the video, although lengthy, is worth watching. If you just want to see the drone dipping in the water, fast forward to 8:03. I have watched that moment a few times now and I cringe every time I see the drone flip backward in the water.

Keep in mind that the short ‘wheel-base’ of the Mavic Air in combination with the four foam balls create a high center of gravity and thus make the drone a lot less stable. The RCGeek water landing gear can also be used without the four foam balls to facilitate landing and taking off in sandy or grassy areas.

Whether you are considering buying water landing gear for your drone, it’s is good to know that the Mavic Air can take a beating and still keep flying!

What do you think about using water landing gear on your drone? Do you have any experience with this? Good or bad. Let us know in the comments below.