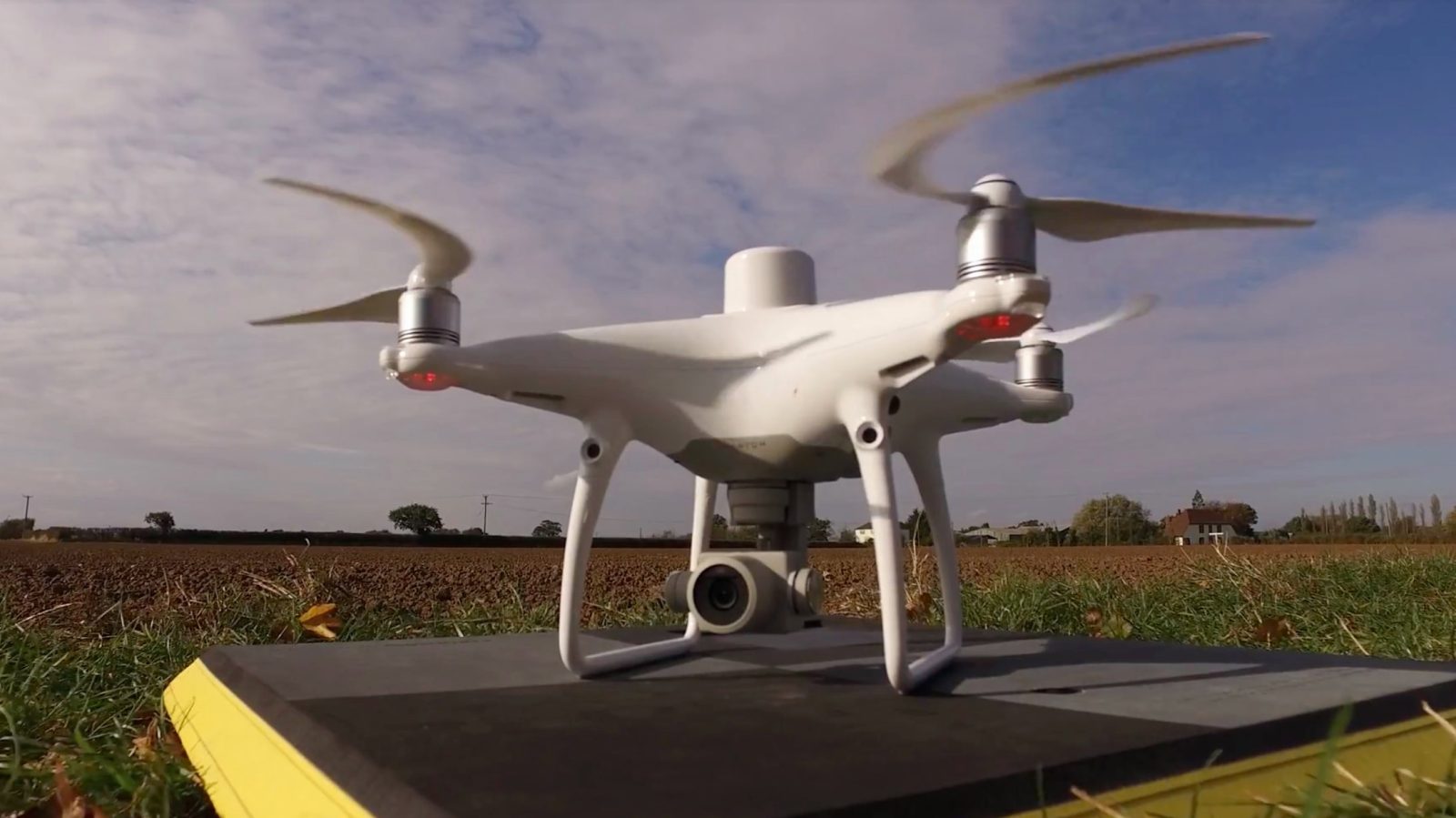 Earlier today, DJI launched the Phantom 4 RTK during the European Drone Summit in Frankfurt, Germany. Of course, regular readers of DroneDJ already knew the RTK version of the Phantom was coming. It makes sense for DJI to introduce the drone right before their own Airworks event later this month in Dallas, TX, during which we expect them to introduce the Mavic 2 Enterprise Edtion.

With the launch of the Phantom 4 RTK, DJI shows that that company is committed to bringing commercial drone applications to the market that come in smaller packages and at lower price points.

The Phantom 4 RTK will retail for €5,700 ($6,608). This includes the drone, remote controller, two intelligent flight batteries, one remote controller intelligent battery, charger hubs for both types of batteries, power adapter and cable, four propeller pairs, and accessories. The retail price of a D-RTK 2 Mobile Station is €3,600 ($4,173). The retail price of a bundle, including Phantom 4 RTK and D-RTK 2 Mobile Station is €7,800 ($9,043).

Our UK friends at the UK commercial drone expert-site, Coptrz, already had a chance to try out the new Phantom 4 RTK and they sent us this video in which they share their first impressions. After putting the Phantom 4 RTK through its paces, the team from Copterz got really excited about “a future with fewer ground control points”. Check out their video below.

“The Phantom 4 RTK was engineered to meet the specific needs of its users who have come to rely on DJI drones as powerful tools for surveying, mapping or inspection operations,” said Sunny Liao, Director of Enterprise, Europe at DJI. “We took feedback from the drone mapping and surveying market on board and believe this solution demonstrates our commitment to strengthening our involvement and innovation in different enterprise verticals where we see substantial demand and potential for growth.”

A non-RTK drone requires up to 40 ground control points (GCP) per square kilometer which takes several hours to place. The DJI Phantom 4 RTK has an in-built centimeter-accurate RTK navigation positioning system and a high-performance imaging system. Combined with the RTK positioning module (GPS L1 L2, GLONASS L1 L2, Galileo E1 E5a and BeiDou B1 B2) it potentially reduces the number of GCPs needed to 0, which saves at least 75% in set-up time. Sitting just beneath the RTK receiver is a redundant GNSS module, installed to maintain flight stability in signal-poor regions such as dense cities. Combining both modules, the Phantom 4 RTK is able to optimise flight safety while ensuring the most precise data is captured for complex surveying, mapping and inspection workflows.

The RTK module can provide positioning accuracy of 1cm+1ppm (horizontal), 1.5cm+1ppm (vertical), and the Phantom 4 RTK can get the 5cm[1] absolute horizontal accuracy of photogrammetric models.

The Phantom 4 RTK can be integrated into any workflow, with the ability to connect its positioning system to the D-RTK 2 Mobile Station, NTRIP (Network Transport of RTCM via Internet Protocol) using a 4G dongle or a WiFi hotspot[2].

To take full advantage of the Phantom 4 RTK’s positioning modules, the new TimeSync system was created to continually align the flight controller, camera and RTK module. Additionally, TimeSync ensures that the Phantom 4 RTK records factory-calibrated lens parameters alongside position, altitude and other data onto each photo, matching the positioning data to the center of the camera’s CMOS sensor and thus optimising the results from photogrammetric methods. 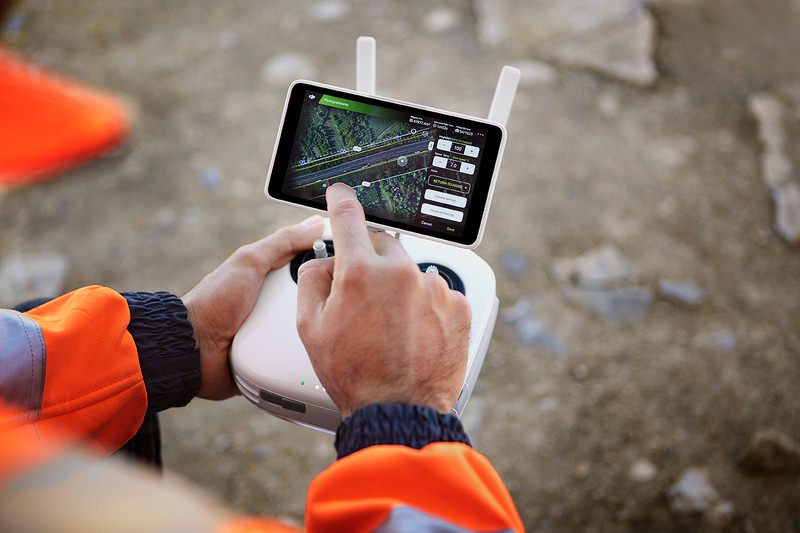 The drone is equipped with a 1” 20 megapixel CMOS sensor. The mechanical shutter makes mapping missions or regular data capture seamless as the Phantom 4 RTK can move while taking pictures without the risk of rolling shutter blur. Due to the high resolution, the Phantom 4 RTK can achieve a Ground Sample Distance (GSD) of 2.74 cm at 100 meters flight altitude.

To ensure each Phantom 4 RTK offers unparalleled accuracy, every single camera lens goes through a rigorous calibration process where radial and tangential lens distortions are measured. The distortion parameters gathered are saved into each image’s metadata, letting post-processing software adjust uniquely for every user.

In areas with lack of RTK coverage, the DJI Phantom 4 RTK allows for the use of Post Processed Kinematics (PPK). The DJI Phantom 4 RTK captures original satellite observation data as well as the ephemeris data and stores it in a PPKRAW.bin file in RTCM 3.2. format. Additionally, the Phantom 4 RTK converts the satellite data on the fly to the RINEX format (Receiver Independent Exchange Format) and writes the data into a RINEX.obs file. Thanks to the internal synchronisation of the GNSS position and camera, the Timestamp.MRK file provides a precise recording of the highly accurate image position. All operation-relevant data is stored on a Micro-SD card in a unique folder for each mission. The consistency of the Phantom 4 RTK’s data reduces the time needed to validate the data and results in an efficient post-processing workflow with minimal to no manual adjustments.

The Phantom 4 RTK’s OcuSync video transmission system enables a stable connection between the drone and its remote controller. The system features strong interference resistance. It delivers 720p video transmission feeds at a distance of up to 7km, which is ideal for mapping larger sites. The flight time of up to 30 minutes allows pilots to complete long missions without having to land the drone to change batteries. Even if the area is too large to map on a single battery charge, the Operation Resumption function of the GS RTK App automatically resumes the mission after the battery has been replaced.

The Phantom 4 RTK is compatible with the DJI Mobile SDK, opening up its functions to automation and customisation through a mobile device.

The GS RTK app has implemented direct loading of KML and KMZ files for in-office flight planning, a new shutter priority mode that keeps the exposure consistent across a whole mission and a strong wind alarm to warn pilots in adverse conditions during automated flight.

The Phantom 4 RTK is compatible with the D-RTK 2 Mobile Station, providing real-time differential data to the drone and forming an accurate surveying solution. The Mobile Station’s rugged design and OcuSync transmission system ensures users can gain centimeter-level accurate data with their Phantom 4 RTK even in challenging conditions.

DJI has been working with European construction giant Strabag SE, a major player in transport infrastructure. Strabag has been utilising drone technology for several mapping projects since 2010, assessing the benefits using aerial data for 3D modelling in reducing costs and improving operational efficiencies. The latest tool-of-choice for their operations is the DJI Phantom 4 RTK.

“The use of drones for construction mapping has a lot of advantages. Their integration changes our workflow and simplifies many operational steps,” said Dr. Thomas Groeninger, Head of Business Unit Digital Object Survey and UAV at Strabag SE. “Conventional surveying methods also deliver 3D models, but digital terrain models created from drone data provide a higher point density. Therefore, reality is portrayed in much more detail.”