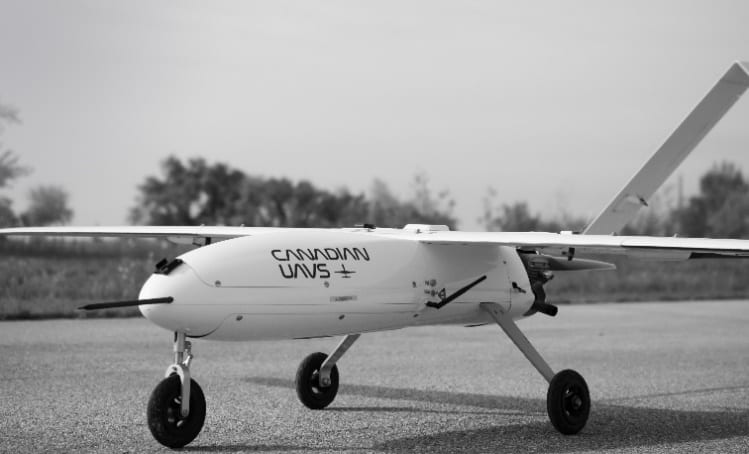 Canadian UAVs is based in the city of Calgary – and the company is a pretty serious player in the sector. With a deep background in fixed-wing and helicopter operations from manned aviation, it already had an edge. It’s that rich expertise, combined with excellent gear, that keeps Canadian UAVs in demand for asset monitoring, inspections, data analysis, etc. It flies a wide variety of UAS, including the Lockheed Martin Indago, the Sensefly Elios (that drone-in-a-cage), and other machines. Last year, it signed a Memorandum of Understanding with Lockheed Martin Canada CDL Systems on jointly exploring Unmanned Traffic Management. It’s also a key player in the SkySensus project. Several Alberta UAV firms are working together on solutions to UTM to help safely commercialize Beyond Visual Line of Sight flights.

The company plans to fly the gasoline-powered “Whiskyjack” UAV on some of these BVLOS missions. With a Command & Control range of 30 kilometers and flight endurance of up to five hours, it could scan the entire massive Oil Sands mine in Alberta in a single flight with exceptional resolution. But to do that safely, it needs a trusted system in the cockpit.

This week, it announced it has selected MicroPilot as its trusted autopilot system.

MicroPilot has an established name in this field already. With multiple products, it has gained some 1,000 clients in 85 different countries. Some of those clients include NASA, Ratheon, and Northrop Grumman.

Our primary focus is always safety. When it came time to outfit the Whiskyjack with an autopilot, we selected the triple redundant MP21283X from MicroPilot. As a Canadian company operating in this field for over 26 years, MicroPilot has the track record and technical aptitude to deliver a quality product we can use for years to come.

That redundant system in the MP21283X actually has three MicroPilot MP2128 autopilots all mounted on a special board. If the first MP2128 fails for some reason, the mission is handed over to the second autopilot. In the even more unlikely event that the second board fails, everything gets pushed over to the third. In other words, you’re better off buying a lottery ticket than wagering on a total failure from an MP21283X system.

It’s an honor to work with a professional UAV operator like Canadian UAVs. We are very excited about the BVLOS SFOC issued to Canadian UAVs and look forward to the flights this winter.

Remember that Memorandum of Understanding with Lockheed Martin? It’s all part of a much bigger picture, and now so too is MicroPilot:

The partnerships with MicroPilot and Lockheed Martin are pillars in our strategy to develop the next generation of BVLOS operations where the unmanned system is fully integrated with a DAA solution providing real-time scalable deconfliction for all airspace classes. MicroPilot is the most experienced autopilot manufacturer in Canada and our combined solution represents the best–of–breed in-country solution for advanced commercial and military operations.”