Want DJI’s Air 2S now? You can buy one on eBay… Update: SOLD 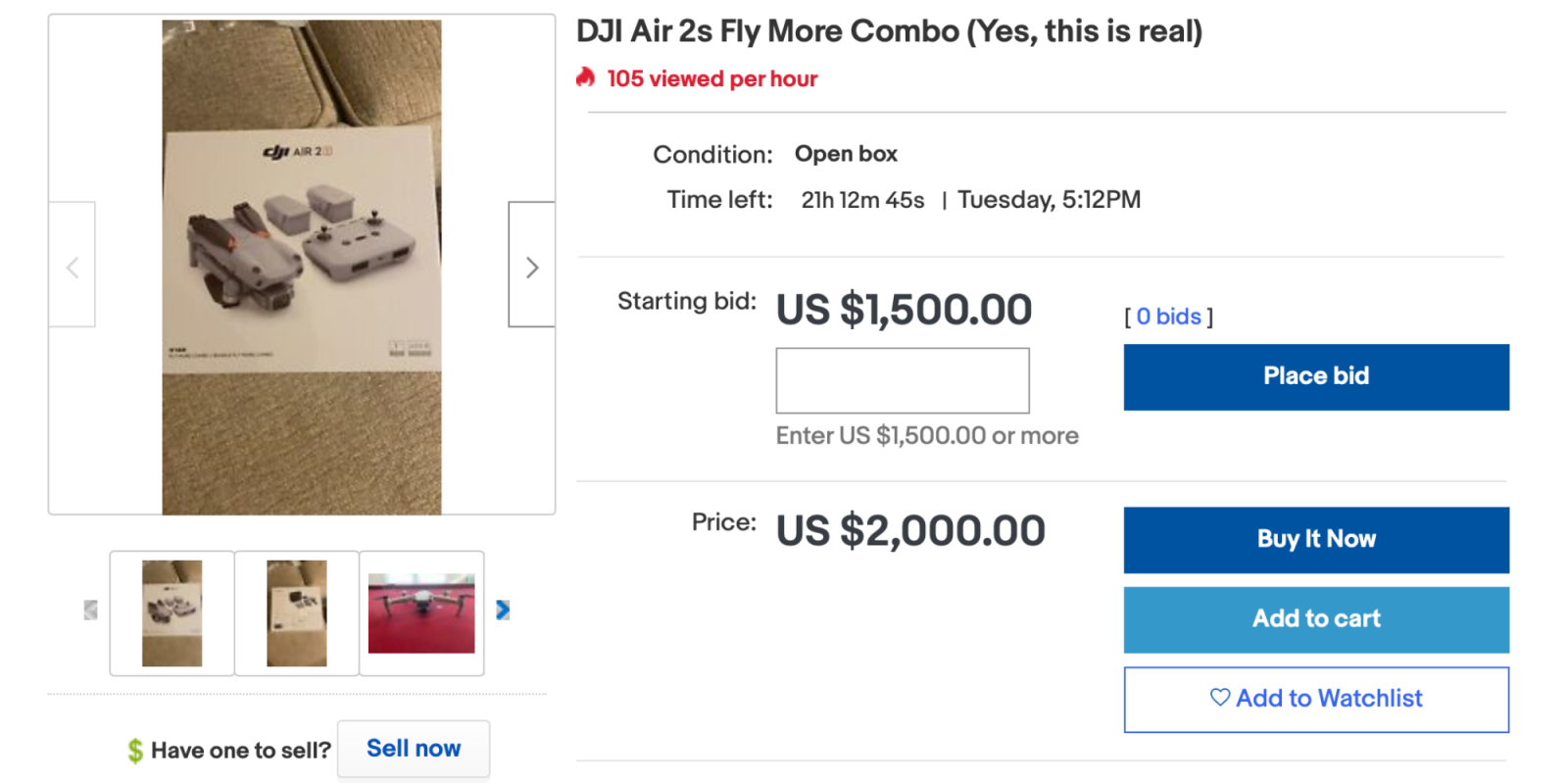 If you’re one of those people who just can’t wait… there’s an DJI Air 2S Fly More Combo up for grabs on eBay. It comes with everything, including a couple of caveats we’ll throw in for free.

Well, it’s not particularly surprising. Some Best Buy locations have apparently jumped the gun and started selling the new DJI Air 2S, which goes on sale officially Thursday, April 15 at 9 a.m. Eastern. And someone who bought that combo thought maybe they could earn a little profit by reselling to someone who simply cannot wait the extra couple of days.

Is it worth buying?

This was spotted by us Monday night. It’s offered by eBay seller kevmichael, who writes in the description:

DJI Air 2s Fly More Combo. I got this at Best Buy, the associate didn’t know he wasn’t supposed to sell it yet. I promise this is real or your money back and will ship USPS Priority Mail Express so you have it in 1 business day! If you have questions just ask :)

Well, let’s think about this.

The drone combo will retail for $1,299 in stores and online Thursday. The seller has put a price tag of $2,000 on it, with a minimum bid of $1,500. Shipping is extra. At the time we saw it, lots of people were looking… but no one was bidding.

Reasons to buy it…

Well, there’s probably only one that you might be able to justify: Getting an unboxing video up on YouTube in the hope that you might – with a ton of views and a lot of luck – get enough views to pay the premium it will cost you to buy the thing.

The seller says you’ll have it within one business day. Which might mean it lands Wednesday, one day before the launch. Come Thursday morning, YouTube will be flooded with review videos that show the drone in flight, rather than unboxing vids (though undoubtedly there will be more of those as well). So if you’re thinking you’ll make a fortune on YouTube with a one-day advantage… you’ll probably be out of luck.

The other reason to buy it is because you just can’t wait to fly it. BUT there’s no way to fly it until the official launch date, because DJI will not be releasing the updated version of DJI Fly until then. So that would also be quite a disappointment.

We see a lot of listings for the Mavic Air 2, which is still a really great drone. And, depending on the condition, there are some potentially awesome deals out there. This one, for example, has the entire Fly More Combo with a current bid of $489, though it’s likely to go up in the days to come. But whether you’re watching eBay or local Buy & Sell forums, there will be owners dropping these for a decent prices.

If you still want to buy that Air 2S combo, well, the listing was here as of the moment this was published.