Today, in a live broadcast, GoPro’s CEO Nick Goodman announced the new ‘Follow’ and ‘Watch’ features for their Karma drone. Apparently, GoPro is unlocking these options through new software as the drone already had the technical capabilities. In the ‘Follow’ mode the drone will follow you (obviously), but only if you have the controller with you. As you can imagine this may be a problem for certain activities where a lot of body movement is required, like skateboarding or mountain biking for instance. In other situations, like when you are hiking, it might not be a big deal at all.

The second new feature is ‘Watch’

The second new feature is ‘Watch’. In this case, the Karma stays in place and will watch you. Again you have to have the controller on you, for this to work and you’d have to stay within a somewhat close proximity to the drone to be visible in the photo of video footage. Think tennis court, skatepark, etc. How practical this is, depends on the kind of activity that you do.

Filmmakers may appreciate the new ability to add up to ten different waypoints in the “Cable Cam” mode. This allows you to map out the flight path of the Karma beforehand so that you can focus on creating cinematic shots while tilting and rotating the camera.

The final update on the Karma drone is the ability for the camera to look upwards. Since the Karma has the camera in front of the rest of the drone, the propellers do not come into view, unlike for instance the DJI Phantom.

Especially the ‘Follow’ feature is something we have been waiting for. Many of the other drone manufacturers already offered this feature. After Karma’s rough start, we are happy to see that GoPro updated the Karma to keep it competitive.

The last and maybe best news to surface today is the fact that Nick Goodman confirmed to Engadget that they are indeed working on a new drone. No word on when that may be launched though.

The new GoPro Karma features are available today so don’t forget to update your software! 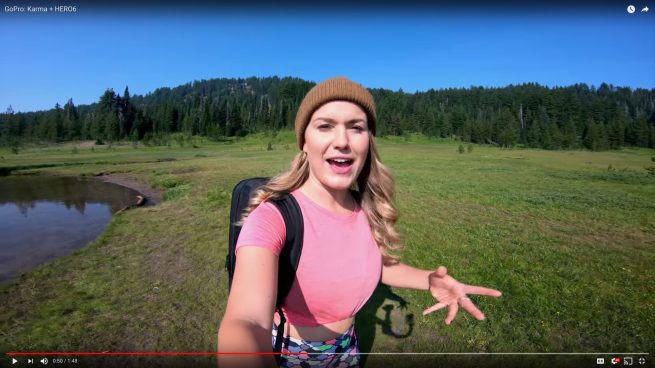 That does not look like the Karma Grip. Look at the shade!