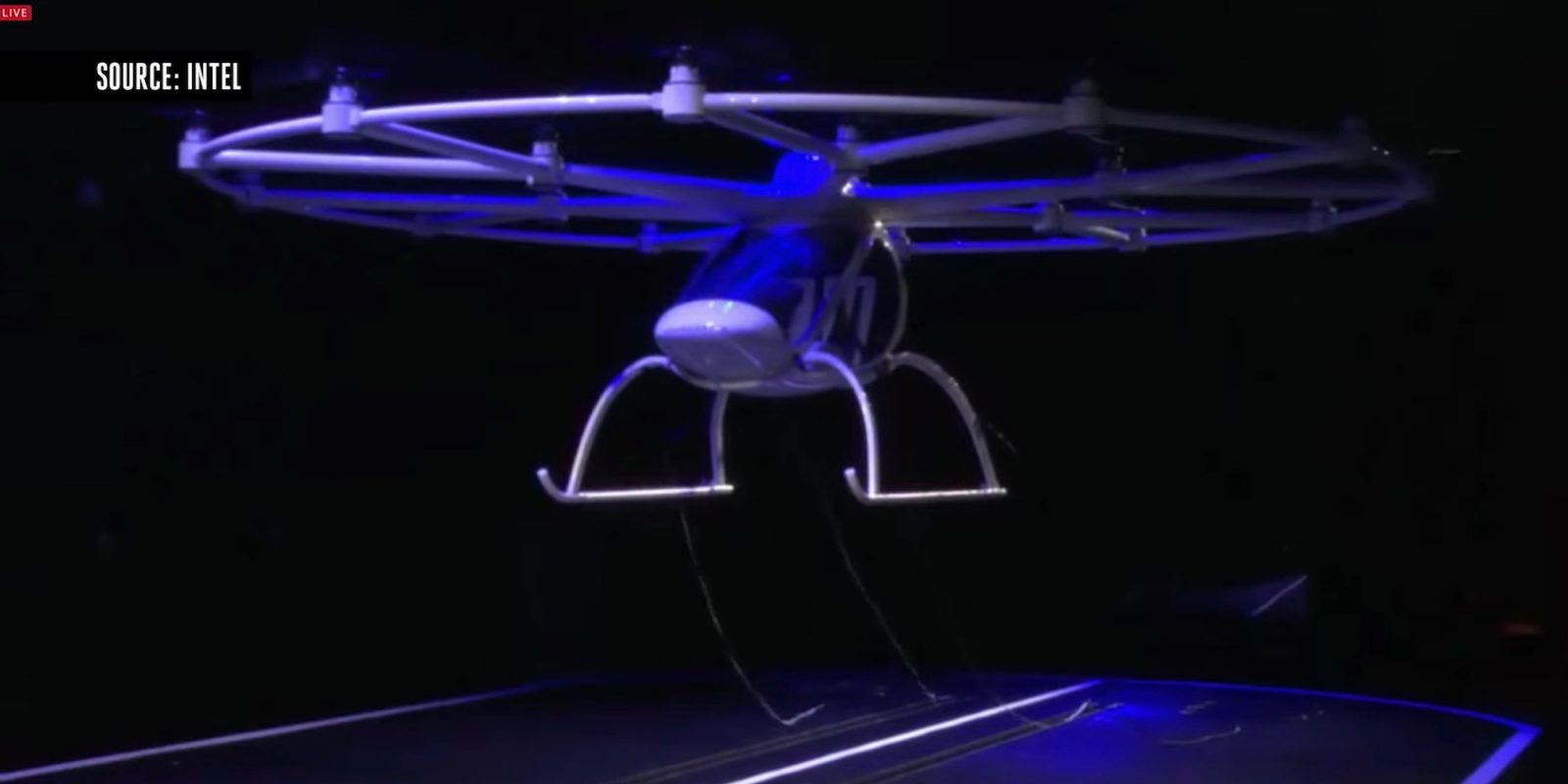 During the CES 2018 event in Las Vegas, the Volocopter 2X, an 18-rotor air taxi drone, made its debut flight. Volocopter works closely together with Intel and after the tech giant completed their keynote presentation, the taxi drone to make its short first flight over the stage. Granted it was a very short flight but the first, nonetheless for Volocopter in North America.

The Volocopter is currently in its second generation and a few things have changed. they raised the rotors somewhat to create more passenger and battery space inside the aircraft. The Volocopter 2X can now fly for 30 minutes and cover about 17 miles. Until the battery technology improves sufficiently and longer flights will be possible, you can now easily and quickly swap out the batteries to maximize flight time. The Volocopter uses the same flight control technology that the Falcon 8+ drone and with Intel technology inside, it is able to fly autonomously

We reported on Volocopter not too long ago when it made its first test flight in Dubai. The German company behind the Volocopter announced a deal with the transit authority in Dubai for a multi-year partnership with the goal of launching a commercial pilot program in the early 2020’s.

Focus on safety and redundancy

Similar to the Workhorse Surefly taxi drone, the focus with the Volocopter is on safety. In a great behind the scenes article by The Verge, Anil Nanduri, the drone group’s vice president, and general manager explains the partnership with Intel as follows:

“When you’re talking about [scaling this technology] up to flying transportation, you are now looking at sensors that need to processes huge amounts of data,” he says. “But what’s most important, it needs to be safe.”

Intel helped to build in enough redundancy into the drone so that if something goes wrong the Volocopter will not immediately fall from the sky. Volocopter points out the single-point-of-failure vulnerabilities of traditional helicopters. Hi-tech, electronic drone taxis can build-in several safety mechanisms that kick in when needed. In the case of Volocopter, the drone can still stay in the air and safely land when one or two of its nine battery packs malfunction. In case all battery packs or rotors were to fail, the drone would rocket-deploy a ballistic parachute to safely bring its passengers back to earth. In The Verge article, Volocopter’s CEO Florian Reuter says:

“In a traditional helicopter, if one single component along the entire drivetrain fails, you are in deep trouble. We’ve pretty much traded in the entire mechanical complexity of today’s helicopters for electronic complexity, which is far more lightweight, far more powerful, and far cheaper today. And we think this vehicle can be constructed in a way that is as safe as a commercial airliner, which is where it needs to be in order to be applied at scale in megacities across the world.”

Unlike a helicopter, the Volocopter is very easy to fly. So easy in fact that according to Reuter:

“It is so intuitive to fly that you could put a five-year-old in here, without any explanation, and it will know how to maneuver this vehicle.”

It is exciting to see big companies, such as Intel back innovative start-ups like Volocopter. The expertise and additional funding will help to make taxi drones a reality. Of course, Volocopter is not alone. We already mentioned Workhorse’s Surefly taxi drone but there are other companies as well that are developing taxi drones.  For instance, the Ehang 184 personal drone, the Autonomous Passenger drone. We will keep you posted here on DroneDj with the latest developments.

What are your thoughts on the larger drones? Do you see a future for them or are you concerned about drones being misused? Let us know in the comments below.