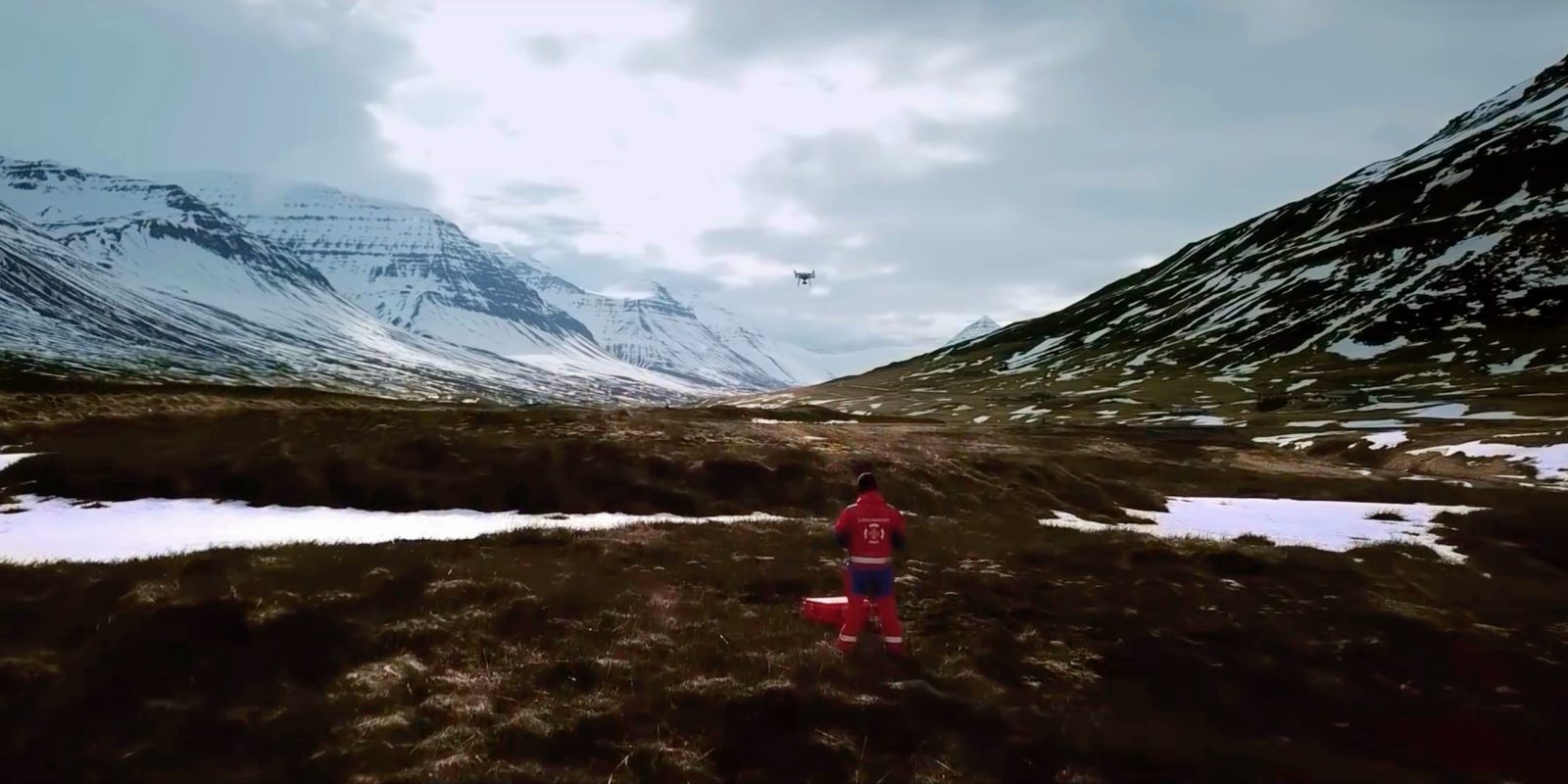 More and more drones are being used to save people’s lives. We have reported on a number of cases where drones came to the rescue and made the difference between life and quite possibly death. Take a look at some of these cases where a drone saved a man from hypothermia, found an 86-year old man who was lost, are able to hear people buried in the rubble after an earthquake or send edible drones to people in need of food. There are many ways in which drones can help save people’s lives. Today we learn about a heroic Icelandic drone rescue that took place in 2016 and for which the rescue team received an award at the European Emergency Number Association (EENA) Awards ceremony in Ljubljana, Slovenia. DJI and EENA also announced that they will extend their partnership to further improve the software and hardware required for search and rescue drones.

April 25, 2018 – The European Emergency Number Association (EENA), the Brussels-based public safety NGO, and DJI, the world’s leader in civilian drones and aerial imaging technology, today celebrated how drones have saved lives in complicated rescue missions, and announced they are extending their research partnership to further integrate drones into rescue operations.

At EENA’s annual 112 Awards ceremony in Ljubljana, Slovenia, the Dalvik Search & Rescue Team from Iceland received the Outstanding Tech for Safety Award, honoring their amazing rescue of two cousins stranded on the side of a mountain. The Dalvik team piloted a drone toward the light of one cousin’s phone, then guided a rescue team through difficult terrain and poor visibility to save them.

EENA and DJI started to collaborate two years ago to study how public safety agencies can use drones in their work, studying their needs and developing hardware and software solutions to serve them. At the start of the EENA Conference 2018 today, they announced they are expanding their partnership to research the proper framework for agencies to integrate drones into their existing command protocols and deploy them for maximum effectiveness.

On the EENA-DJI partnership, Gary Machado, EENA Executive Director, commented: “I am incredibly proud to see how far we have come, bringing extraordinary results which help save lives of ordinary citizens. Drone technology is one way we can enhance the capabilities of rescue services and keep citizens safer.”

“DJI’s partnership with EENA has allowed us to study and document how drone technology helps rescue services reduce the time, risk and cost inherent in their dangerous work,” said Romeo Durscher, DJI Director of Public Safety Integration. “By responding faster, operating more efficiently and keeping emergency workers safer, drones have the potential to become standard equipment in emergency response. As DJI and EENA continue developing protocols to bring these benefits to emergency workers, it is gratifying to know our work will help ensure drones can save taxpayer money, reduce operational risks, and save more lives.”

In a keynote address at the conference, Durscher explored how public safety agencies are rapidly innovating new uses for drones. While developers are creating special tools tailored to rescuer needs such as augmented-reality overlays and aerial searchlights, agencies have pioneered ways for drones to provide valuable information both before and after incidents.

The next phase of the EENA and DJI collaboration will use real-world testing of drones to guide the creation of European-wide emergency service standards for using drones, training pilots, and operating within a legal framework. The project will deliver clear tactical recommendations for using drones, as well as recommendations to lawmakers, regulators and training bodies about how to consider drone use. The Donegal Mountain Rescue Team in Ireland and the Mid and West Wales Fire and Rescue Service in the UK will serve as testing grounds for this phase of the study, offering a variety of firefighting and search and rescue scenarios across cities, high mountains, coastal waters and other challenging terrain.

The European Emergency Number Association (EENA) is a Brussels-based NGO established in 1999. Our strategic mission is to improve the responses made by emergency services. As an NGO, EENA is an independent and impartial organization, and does not seek to represent the interests of any one organization, technology or product. Tactically, this manifests itself with the creation of several engagement platforms (conferences, workshops, working groups, web meetings) to bring the supply-side (vendors, manufacturers, integrators) and the demand-side (emergency service organizations, government ministries, regulators, etc) together with a view to discussing legal, technical and operational matters in a thought-leadership and impactful style. EENA has approximately 1,500 public safety officials from 80 countries in its network, while 90 vendors and manufacturers make up the supply-side equation.

DJI, the world’s leader in civilian drones and aerial imaging technology, was founded and is run by people with a passion for remote-controlled helicopters and experts in flight-control technology and camera stabilization. The company is dedicated to making aerial photography and filmmaking equipment and platforms more accessible, reliable and easier to use for creators and innovators around the world. DJI’s global operations currently span across the Americas, Europe and Asia, and its revolutionary products and solutions have been chosen by customers in over 100 countries for applications in filmmaking, construction, inspection, emergency response, agriculture, conservation and many other industries.