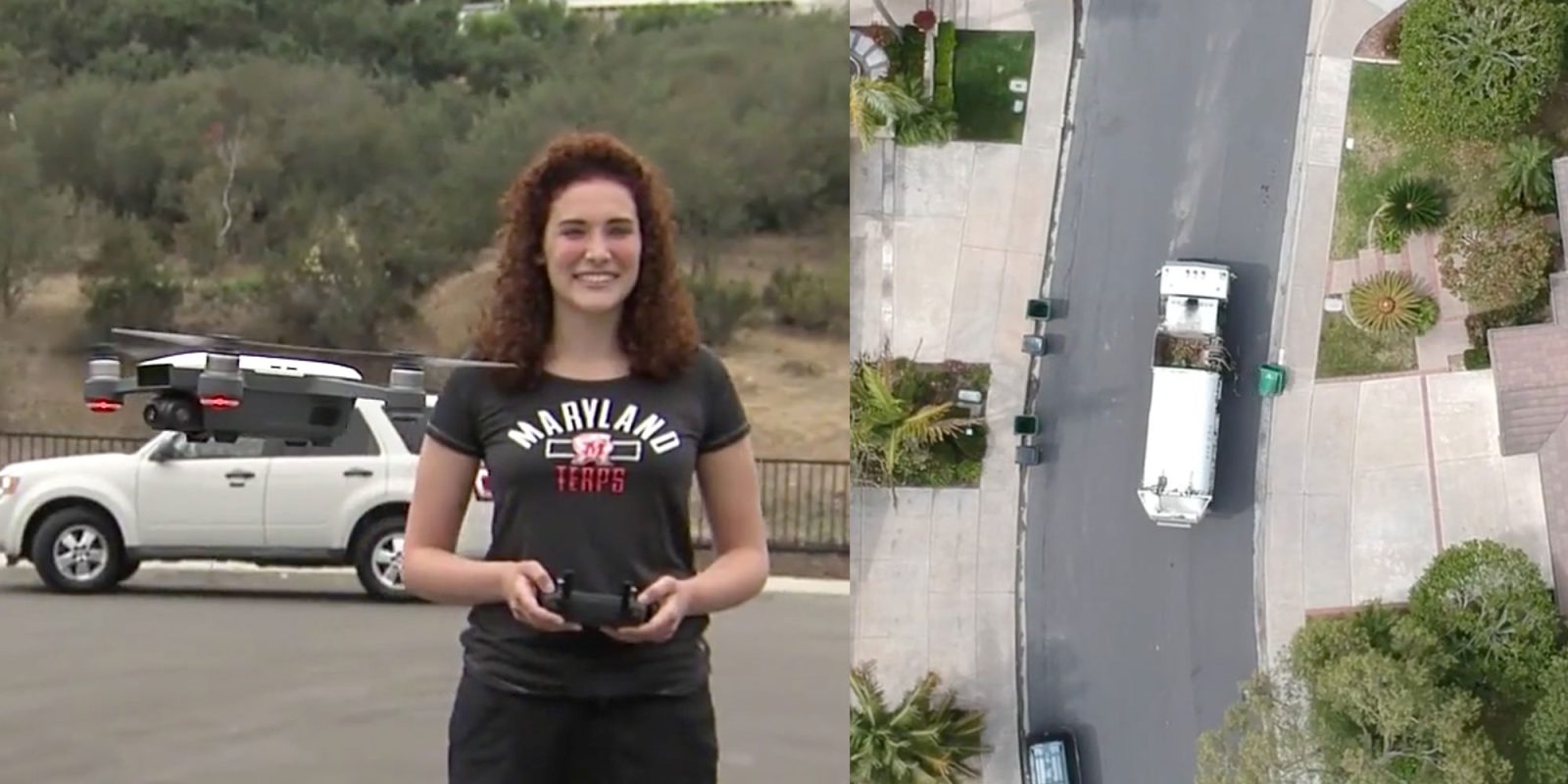 Residents in the Del Mar (San Diego) community have found their trash cans toppled over and damaged week after week. As the repair and replacement costs started to add up, one of the homeowners took her DJI Spark drone and flew it around the neighborhood to find out who was trashing the trash cans in their Del Mar community.

KUSI News reports one of the homeowners, Britt Rubenstein saying:

“Over the years, the trash cans have just become broken. I’ll have to replace that again.”

The Rubenstein trash can has been repaired with duct tape that is barely holding it together. It clearly isn’t functional any longer and they’ve only had it for about 4 months. The Rubenstein were wondering what was happening to the trash cans in their neighborhood. Lily Rubenstein decided to take her DJI spark drone and fly around the neighborhood to find out.

Lily recorded video of a garbage truck doing its rounds. In this video, you can see the truck picking up the trash cans but it already starts driving when it still has to put back the cans. As a result of the cans get knocked over and left along the curbside. Lily and Britt Rubenstein were not pleased and many neighbors felt the same way after seeing the video.

“They violently pick them up and throw them up and they come hurling back down and get slammed on the cement,” Britt said. “It’s plastic. There’s only so much that it’s going to withhold.”

“Reckless. It looked like he really didn’t care,” Lily said. “They were literally falling over, dropping in the middle of the driveway. He was leaving before the mechanism was finished putting the cans down.”

Even though the trash cans are the property of the city, it’s the homeowners’ responsibility to replace any damaged cans. They can cost up to $100 each.

“It literally makes no sense that we’re responsible for it when they’re destroying it,” Lily said after having replaced her trash can four times already.

After a reporter off KUSI contacted the city of San Diego the city respond as quickly with the following statement.

“The City of San Diego Environmental Services Department takes reports of alleged container damage and issues of safety very seriously. In fact, our priority is safety first, second and always. Sanitation drivers are trained on proper collection techniques both in terms of using the arm on the truck to lift and dump the container contents as well as proper placement of the container following service.

We greatly appreciate residents bringing this to our attention and we are addressing this matter to ensure drivers remain diligent and responsible for the safety and the treatment/care of refuse containers. The City’s Collection Services Safety Program emphasizes both safe operations and respect for equipment, including the inventory of containers in service.”