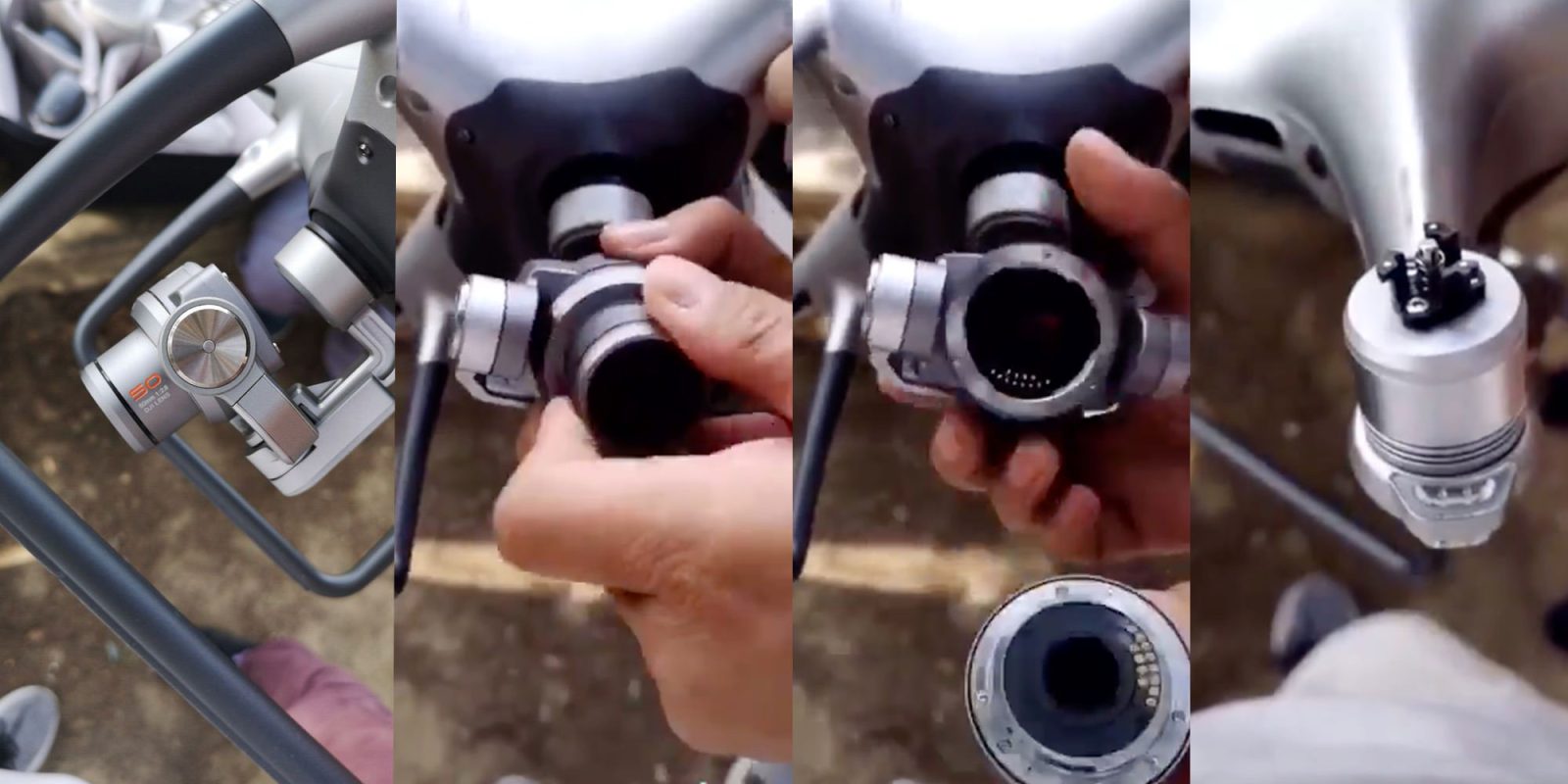 Today a new photo and video surfaced on Twitter of the silver Phantom drone, that DJI calls a one-off edition for an enterprise customer. The Chinese drone maker has repeatedly denied that these photos would show a prototype of the Phantom 5. But many people are doubtful as the interchangeable lens system seems too costly to have only been developed for one single customer.

The Twitter photo (below) from OsitaLV shows the lens, camera, and gimbal from the side. The lens is marked as a 50mm, 1:2.8, DJI Lens in orange and white lettering. The gimbal looks similar to the design we know from the Phantom 4, but the camera is different in shape. Instead of being boxy, this design is more rounded to accommodate the lens mount.

The video (below as well) on Twitter shows the drone from almost all angles. The most interesting part is halfway through the video when the lens is dismounted from the camera. The sound with which it comes off simply sounds good. Similar as to when you’d take a lens off a DSLR camera. The last part of the video focusses on the motors and propeller mounts, which seem to be weather sealed. This too is a feature many people have asked about in online forums and reviews.

As we have seen in previous photos at least two of these silver Phantom drones exists. However, we have yet to see a different lens than the 50mm.

Every time we wondered or speculated that this silver Phantom drone might be a prototype of the Phantom 5, DJI has reached out to us to deny that this was the case. In one of their statements they said:

“The Phantom 4 drone with interchangeable lenses sighted in some online publications is not a DJI product for public sale. To clarify, this was a modified Phantom 4 Pro drone designed for an enterprise client to serve specific application needs.”

However, the idea of a Phantom 5 with an interchangeable lens system is very exciting. And once you have seen these photos, it is a tough one to get rid off. Many professional photographers and videographers would love to have a Phantom with a set of prime lenses (15mm, 24mm, 35mm, and 50mm). It would make for a mini Inspire 2 with the Zenmuse X7 camera and lenses. However, significantly less expensive and easier to travel with.

DJI has repeatedly denied the photos showing a Phantom 5 prototype, but as our poll below shows, many of you would love to have a drone with an interchangeable lens system. And after having seen these photos, the expectation is set for DJI to deliver on that dream drone with the successor of the Phantom 4 Pro.

Once it is out, it is hard to put the genie back in the bottle.

Some rumors said this thing called Phantom 4E, E means Enterprise.
Well, this kind of design will be used on upcoming P5. pic.twitter.com/7yrP88cfMr

What do you think about these photos of the Phantom with the interchangeable lens system? Let us know in the comments below.