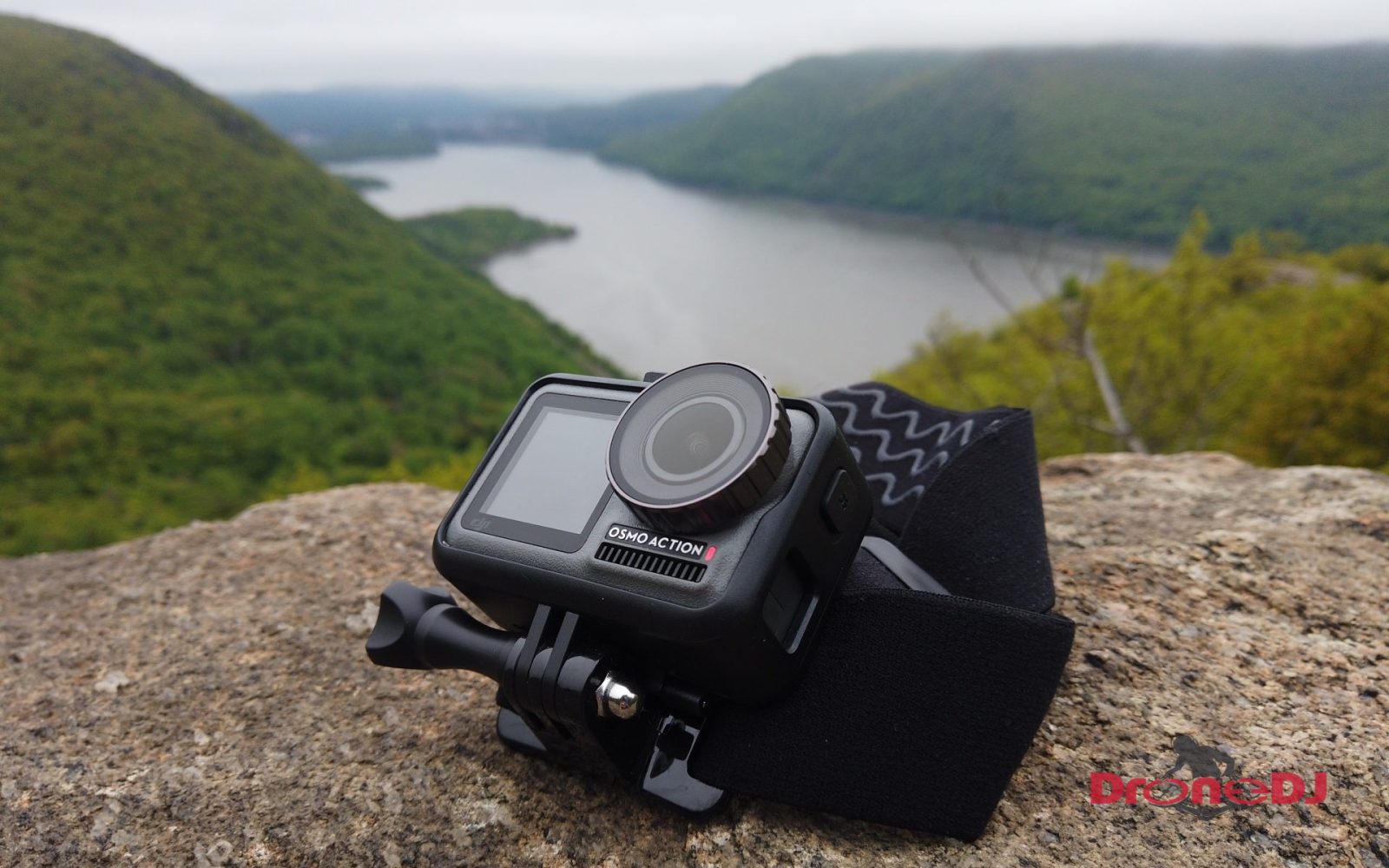 Well, this has to be DJI’s worst kept secret! The DJI Osmo Action camera. After the DJI Osmo Pocket, DJI now introduces a rugged action camera to record all your adventures. This little guy is waterproof, dustproof and shockproof. The DJI Osmo Action features two displays, one of which is a touch screen. The camera takes 12-megapixel stills though its F2.8 lens (145 degrees FOV). Photos and video are recorded on a 1/2.3” sensor. And, video can be recorded in 4K, up to 60fps at 100Mbps with DJI’s Electronic Image Stabilization (EIS), called RockSteady.

The Osmo Action retails for $349 and is available as of right now from DJI directly, authorized DJI dealers, such as DroneNerds and other resellers. Let’s take a closer look at the specs and see what makes the DJI Osmo Action special in the crowded action camera market place.

Why did DJI launch the Osmo Action?

Let’s start with the why. Why does DJI need to make an action camera when the market place is already so crowded with some large established competitors?

Why? Well, because they can. DJI has been in the ‘flying camera’ business for some time now and they have shown to be very ambitious, capable and persistent. I think many will agree that the launch of a product like the Osmo Action was a move that DJI would make at some point in time. The drone maker seems to want to get as many quality cameras in the hands of the masses. And, DJI’s President, Roger Luo seems to confirm that with the following quote:

“Whether you are capturing aerial content with Mavic 2, incredibly smooth content with Osmo Pocket, or heart-racing footage with Osmo Action, DJI offers a full suite of products for your creative needs.”

“Unleash your other side”

In the announcement that DJI had sent out last week, the company used the slogan: “Unleash Your Other Side.” Obviously, what DJI was referring to, are the two color displays that the Osmo Action camera features. It has a 2.25” touch screen on the back and a 1.4” display on the front to help with vlogging and composition. Both screens are very bright (750 nits) and make it easy to see what you’re recording in bright daylight.

Two microphones positioned at the top and right side of the camera make sure that the sound is properly recorded. DJI said that they will also release an adapter in the near future to allow for an external microphone. I tried the adapter from the Osmo Pocket and a microphone on the Osmo Action but could not hear a big difference in sound quality. I recorded indoors so the difference may not have been big enough to notice. Or the Osmo Pocket adapter may not work on the Osmo Action. I will test this some more in the near future.

The DJI Osmo Action camera is dustproof, waterproof (up to 36 feet) and shockproof (5 feet) and can even be used in below-freezing temperatures (14° Fahrenheit). 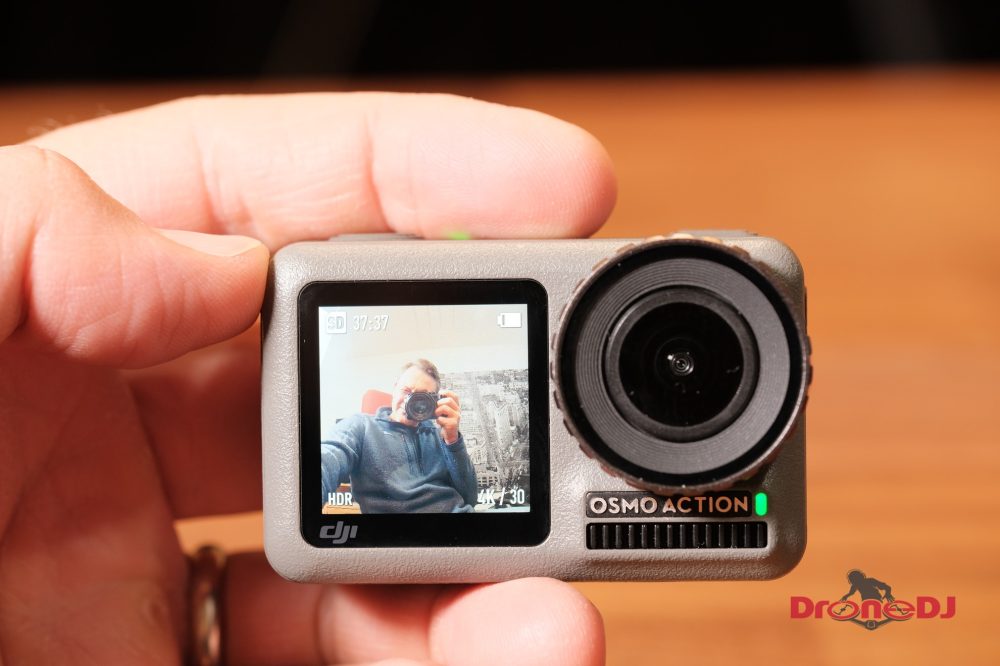 The photo and video specs of the DJI Osmo Action

The three-glass aspherical lens is designed for low distortion and is treated with an anti-fingerprint coating, and an anti-reflective coating to reduce glare and give shooters more flexibility in tough lighting conditions.

The DJI Osmo Action is DJI’s first camera to feature DJI’s Electronic Image Stabilization, called RockSteady. I tested RockSteady while hiking/rock climbing and mountain biking. It seems to do a really good job compared to some other action cameras on the market. RockSteady can be used in 4K video at 60fps.

The DJI Osmo Action also offers other modes such as High Dynamic range video, which add three stops, but when you use this you lose the RockSteady feature. The camera also allows you to very easily take time-lapse videos as well as slow motion (8x, 240fps at 1080p or 4x, 120fps at 1080p).

The battery of the DJI Osmo Action can be swapped and charges to 100% in 88 minutes. Once fully charged, you can record 93 minutes of 4K at 30fps (not 60fps) footage with RockSteady enabled or 135 minutes of 1080p at 30fps. The camera features voice control that allows you to start and stop recording among other things and it has a speaker for sound during playback of your footage.

The DJI Osmo Action can be controlled and managed wirelessly (WiFi) through the DJI Mimo app in a way very similar to what we have seen with the DJI Osmo Pocket.

The camera has three dedicated buttons that allow for quick and easy operation. The on/off and record buttons on top of the device and a QS button on the left side to quickly switch between the front and rear display when pressed longer or to quickly select between video, HDR video, slow-motion, timelapse and photo. All other functions are either controlled by using the rear touch screen or via the DJI Mimo app on your phone.

Accessories for the DJI Osmo Action

DJI promises to launch a line of different accessories for the DJI Osmo Action, although hopefully, they will not make us wait as long as they are still doing with the Osmo Pocket!

DJI will offer the following accessories:

The DJI Osmo Action will sell for $349 USD and ships immediately after this announcement as we have come to expect from the Chinese drone maker. The camera will be sold at authorized DJI dealers as of May 22nd.