Illegal drone flights and crashes at the Golden Gate Bridge 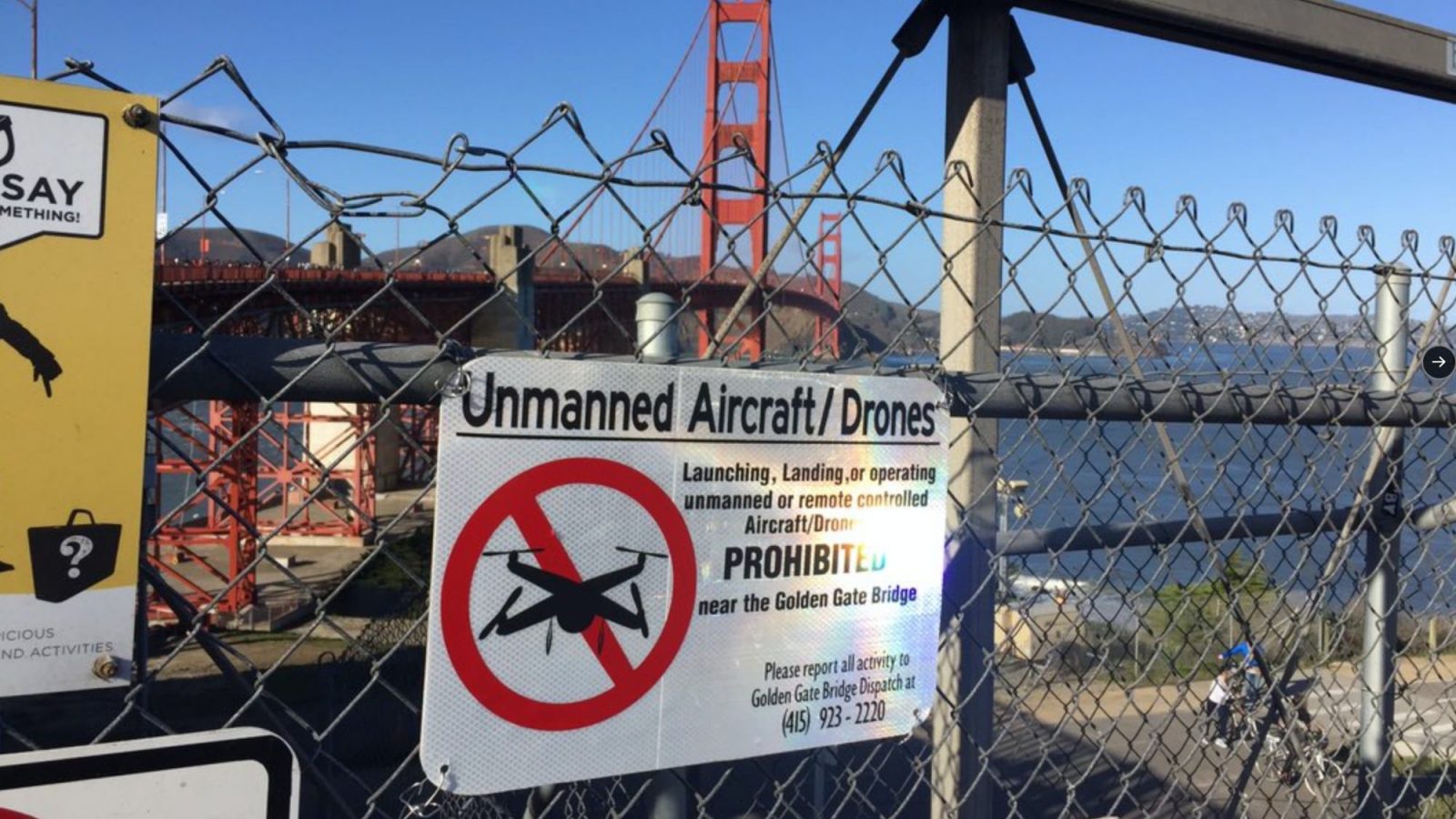 The Golden Gate Bridge in San Francisco has always been a much-loved photography subject. And now, with drones becoming smaller, increasingly capable, and ever more affordable, even more people are using their unmanned aircraft to photograph the famous landmark. Most of these flights, however, are illegal drone flights, and there have also been several drones that crashed into and onto the renowned bridge causing dangerous situations for motorists.

Illegal drone flights and crashes at the Golden Gate Bridge

Many drone photos and videos of the Golden Gate Bridge end up on Instagram and Youtube, where the imagery is trendy. However, most of the aerial footage was likely taking during illegal drone flights.

In 2014, the National Park Service made it illegal to take off or land your drone inside the parks to protect people and wildlife, unless a special permit had been obtained. This includes the 82,027-acre Golden Gate National Recreation Area, which surrounds the Golden Gate Bridge, reports the San Francisco Chronicle.

About one year later, the signs, as shown in the photo above, saying ‘drones prohibited’ were installed around the bridge. The airspace around and over the structure has not been declared off-limits for drones by the Federal Aviation Administration, although flying over moving vehicles is not allowed.

Now it's official. "No Drones" signs go up today at Golden Gate Bridge. Violators may be prosecuted, drones seized. pic.twitter.com/1dNmp9BgNv

The signs, as well as the rules, have failed to deter many tourists and hobbyists drone pilots from flying their drones around the Golden Gate Bridge. Unfortunately, not all drone flights end well. The newspaper reports that since late 2014, five drones have crashed on the bridge’s roadway. The two most recent crashes occurred in 2018, according to the Golden Gate Bridge, Highway and Transportation District, which manages the bridge. A sixth drone crashed into one of the towers underneath the roadway.

Denis Mulligan, CEO of the transportation district, describe one of the crashes based on video footage from security cameras. It showed two young women standing on the Marin County side of the bridge. They fly an unmanned aerial system towards the south tower. The drone, however, loses its connection to the remote controller and falls from the sky into the northbound traffic lane.

Enforcement of the rules against drones in the Golden Gate National Recreation Area is handled by the park rangers who issue citations and even seize drones according to Nationals Parks spokesman Charles Strickfaden.

“We document about 20 reports per year, and suspect that unreported illegal use is much higher than this. In these cases U.S. Park Rangers and U.S. Park Police actively respond to visitor reports, and attempt to contact the operator. Officers contacted website owners that they can be prosecuted for illegal drone activity and associated commercial filming without a permit,” said Strickfaden.

Taking off or landing your drone in city parks is not allowed either. The San Francisco Recreation and Park Department has issued 26 citations since July 2015, with individual fines as high as $192.

Eventhough many of the Golden Gate Bridge, aerial photos have been taking illegally, neither Youtube or Instagram seems to be doing much against people posting the imagery online.

DJI has not geo-fenced the Golden Gate Bridge as the FAA has not required the drone manufacturer to do so.

“Drone pilots are responsible for understanding and obeying all rules and regulations during their flights, and the overwhelming majority of drone pilots fly safely and responsibly. DJI will only override their decision-making or disable our technology for the most serious concerns,” said Adam Lisberg, from DJI.

FAA spokesman Ian Gregor said that he didn’t have any information on whether the FAA is considering to ban drones from the airspace around the bridge, but did say that:

What do you think about these illegal drone flights around the Golden Gate Bridge? Should that be allowed or banned completely? Let us know in the comments below.