Drone video of Mercedes Benz Museum may beat being there 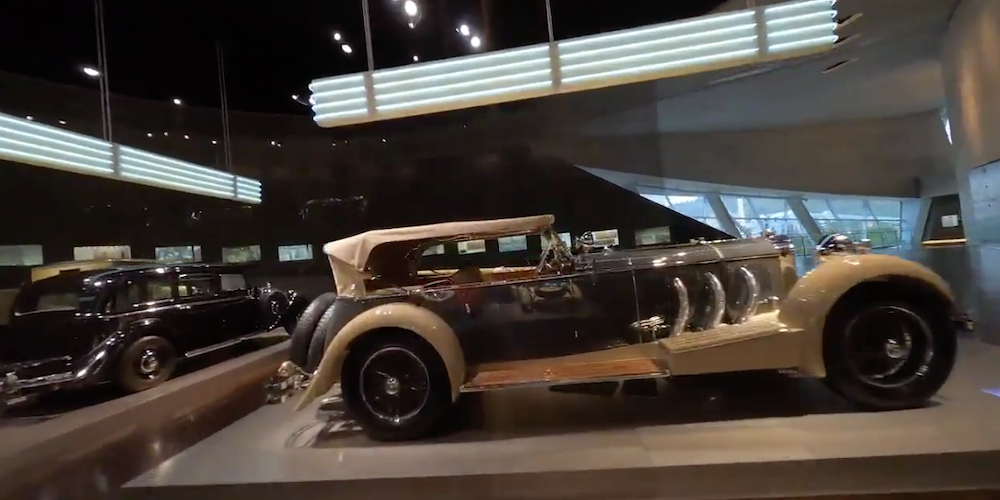 The Mercedes Benz Museum in Stuttgart is truly a temple of the automobile. To celebrate the museum’s reopening after Germany’s months of coronavirus shutdown, Mercedes has released a stunning FPV drone video flying through the full length of the spiraling structure.

While much of the US and many other countries are still firmly locked down, it’s hard to believe how far Germany has come in opening back up. But that’s what can happen when you rigorously test and monitor the health of your citizens during a pandemic.

Over a century of automobiles

Mercedes celebrates with a two-minute, twenty-second drone tour of the entire structure, covering over a century of auto making. Beginning at the roof, a facemask-wearing guard opens the door and allows the drone in. What follows is a historical tour that begins with vintage models from the early 20th century. The Mercedes Benz Museum seems to skip World War II and then jumps on to the 50s and 60s, as mellow rock and roll music of the era plays in the video soundtrack. At one point, the drone even flies through the windows of a gull-wing Mercedes sports car, complete with a swoosh sound effect. The wide angle of the drone’s camera seems to stretch out the bodies of roadsters, accentuating their sleek lines.

On Saturday, 9 May 2020, we will be opening our doors to the public again. But before we do that, we had a special little flying visitor 😉 Initially, visits are only possible from Friday to Sunday. See you in Stuttgart, Germany! #MBmuseum pic.twitter.com/rDxA242tFl

The video then jumps to new footage, showing off the company’s racing heritage, with cars lined up on a mock racetrack that curves through the vast building. The drone then winds down to concept cars that perch improbably along the walls of the building, ending in vehicles that look more like spaceships than automobiles.

At last, the drone flies down to the first floor of the Mercedes Benz Museum, though an auditorium where it zooms through the railings. Then it’s out the front door to the plaza in front of the building with the drone turning back to provide a full view of the building’s exterior. At the end, it’s hard to believe that there’s so much history is packed into one building and just over two minutes of flight.