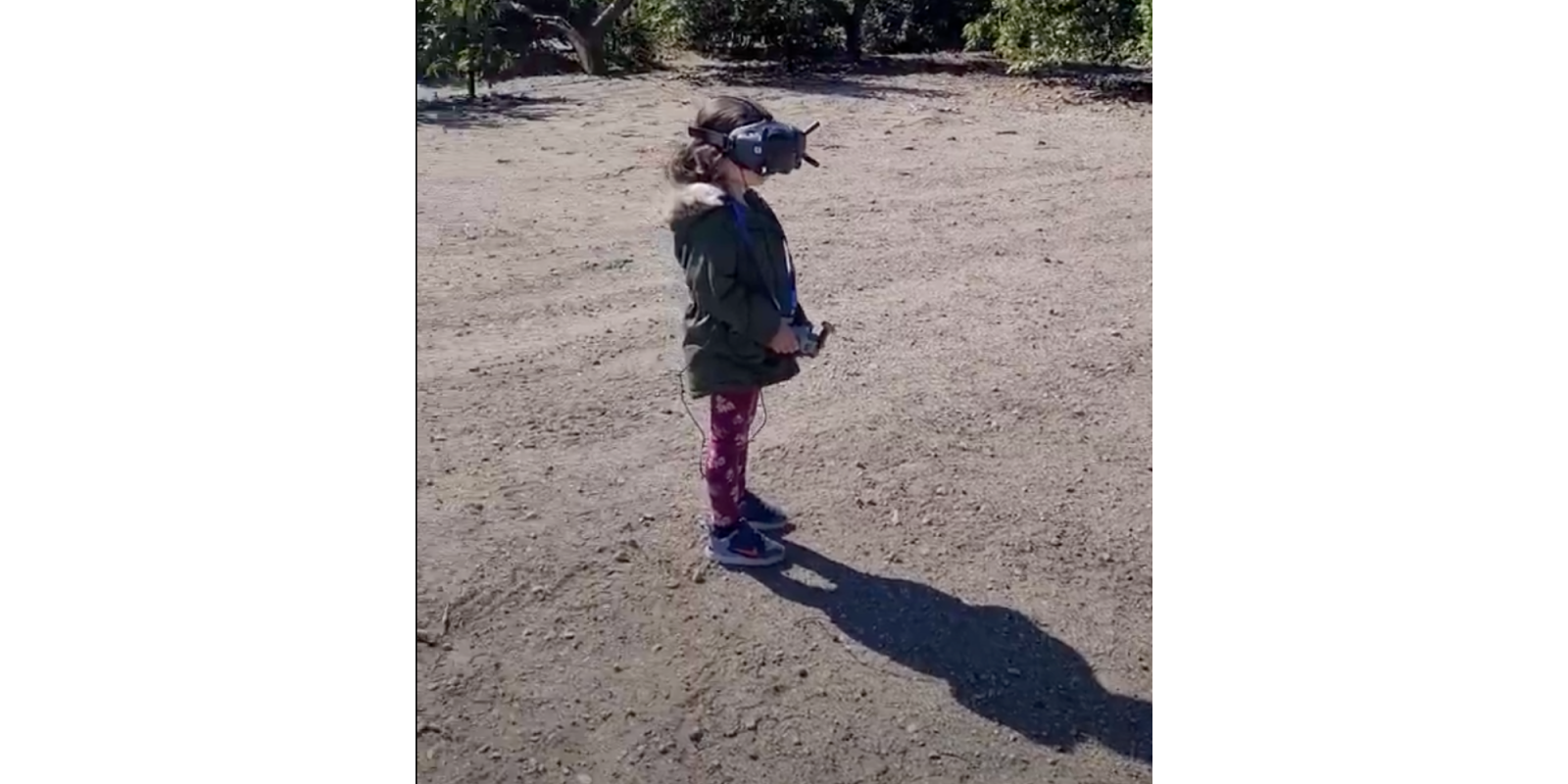 There’s no doubt that DJI products are stable. That’s part of the reason they’re so popular with people around the world. And the new FPV model? Well, in the right modes, it’s child’s play.

We were on Facebook a little while ago, and a post caught our attention. It came from Fred Alonzo, an avid FPV pilot who has been flying for about two years. That’s half as long as his 4-year-old daughter Lucy has been around. Fred bought the new DJI FPV drone, and thought he’d put it in the hands of his daughter.

Lucy in the sky…

We couldn’t resist slightly repeating the headline, because what we’re about to look at is pretty cool. Lucy has spent a bit of time on the DJI simulator, which can be played with using the goggles, and she’s also spent some time playing around on the Liftoff FPV simulator. She has also come along occasionally when her dad flies, watching what he sees through a second set of goggles. And she’s already interested in the hobby.

“She doesn’t come along very often with me when I’m flying,” explains Fred. “But I bring her along sometimes and put her under the spectator goggles.”

Here’s a picture of the two from Fred’s Facebook profile.

Let’s get this girl in the air

And so, after Lucy had done a bit of time (about 10 minutes) with the DJI simulator, Fred decided it was time for her to fly some FPV. No, she wasn’t in acro mode. But this is pretty darn impressive. Just as impressive, perhaps, is that Dad would trust her with the new drone. But, as we said, DJI is a very stable product in normal modes and the FPV is no exception.

We should also note that Fred was clearly acting as her visual observer, and they were flying at Open Grove Raceway in Oxnard, California. It’s an Academy of Model Aeronautics affiliated facility. That’s where Fred learned how to fly FPV, and not an urban location. Plus, as you’ll see, this is not an extended flight in Sports mode.

Go ahead, Lucy: Take off… just like on the game…

Fred, of course, was pleased, as any parent would have been. It was her very first time flying FPV.

“I think she did good, she was very focused,” he says. (While you’re here, why not follow Fred’s YouTube channel.) The bad news? Lucy won’t, by law, be able to apply for her Part 107 until she’s 16.

Fred, of course, has already flown the DJI FPV in full manual (acro) mode. And he has some thoughts.

It’s a good product for people wanting to learn FPV. But I don’t recommend it for hard freestyle or racing; it’s too fragile. But it flies great – good for a long-range setup for me. I get more flight time than my regular freestyle kwads.

And for those people who are new to drones, he has some advice.

Practice on the simulator for sure. Fly it in sport mode first to get the feel for it. And after practicing acro on the sim, when you are ready, send it in acro (manual) mode .

With chops like that, we suspect it might not be too long before Lucy is flying manually. Give her more time on the simulator, plus a few good runs in sports mode, and we might just see one of the world’s youngest FPV pilots pulling some great manual flights.

Editors note: Obviously, Lucy was under the supervision of her father and in a location he deemed to be safe (away from traffic, homes, other people). It’s worth noting that with a flick of the switch, the DJI FPV drone can become fully manual and far more difficult to control. So if you’re going to try a quick familiarization flight with a pilot under 16, we’d suggest something like the Mini 2.