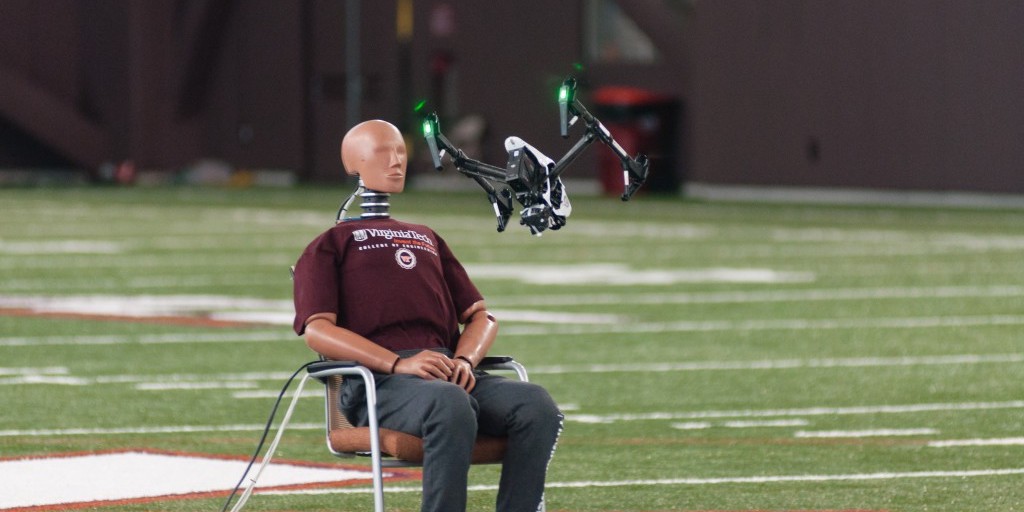 In the United States of America, the FAA does not allow pilots to fly their drones over people and rightfully so. Not too long ago we saw a near miss when a skier almost got hit by a drone during a World Cup event in Italy. And another example is a drone falling out of the sky during a bike race, sending one cyclist over the handlebars. A third example is a bride and groom who get hit with a drone. However, the FAA has granted waivers to commercial drone operators and has allowed pilots to fly their drones over crowds. Obviously, flying drones over people is a bad idea until they can be made safer. For policymakers come up with appropriate rules and regulations, they need to understand the risks involved and the potential injuries that one could sustain from a collision with a drone.

Three kinds of drones were used in the test, of which the results were published in the Annals of Biomedical Engineering, the DJI Phantom 3 (2.2 lbs.), the DJI Inspire 1 (6.8 lbs.) and DJI S1000+ (24.2lbs.). It is important to note that all drones weigh less than 55 lbs. and were flown at speeds less than 100 mph, limitations set forth by the FAA under its part 107 commercial drone rules.

During the test, two sorts of collisions were simulated. One where the drone is dropped on the dummy’s head from a height of 18 feet and one where the drone is flown into the dummies face at full speed. The dummy is packed with sensors to measure the impact. The results were then compared to standard benchmark forces associated with serious or life-threatening injuries such as skull fractures.

There’s a wide range of risk

Steven Rowson, a leader of the study and an assistant professor in the college of engineering at Virginia Tech, said in a news release:

The findings from Virginia Tech are similar to the UAS Ground Collision Severity Evaluation conducted by the FAA in April, in which they compared the impact of a Phantom 3 with the impact of a piece of metal and wood hitting a crash dummy. The vertical drops were to most dangerous, as the weight of the battery pack caused the highest level of impact. When the drone flew into the dummy’s head the impact for multi propeller drones was typically less severe because of the props and arms on which the propellers are mounted reduced the force of the impact and deflected the battery pack to a degree. Bigger props do increase the risk of lacerations.

“If you reduce the energy that’s able to be transferred to be head, you reduce the injury risk,” said Eamon Campolettano, a doctoral student from Hicksville, New York, and the paper’s first author. “The overarching goal for manufacturers should be to limit energy transfer.”

When will the FAA allow drone flights over crowds?

Probably not anytime soon. “There’s a tremendous demand for more research in this area,” said Mark Blanks, the director of the Virginia Tech Mid-Atlantic Aviation Partnership. “The first step was to establish a baseline for how to perform these tests. Now we’re doing a lot of work with individual companies, looking at specific airframes and potential mitigations.”

“The big question right now is, what is the acceptable level of safety?” said Blanks, who also chairs an industry standards subcommittee developing recommendations for safe operations over people. “How much proof does the FAA need before they say, ‘Yes, that’s okay’? Once those standards are in place, we’re going to see huge expansion in the industry.”

Hats of to the dummy!