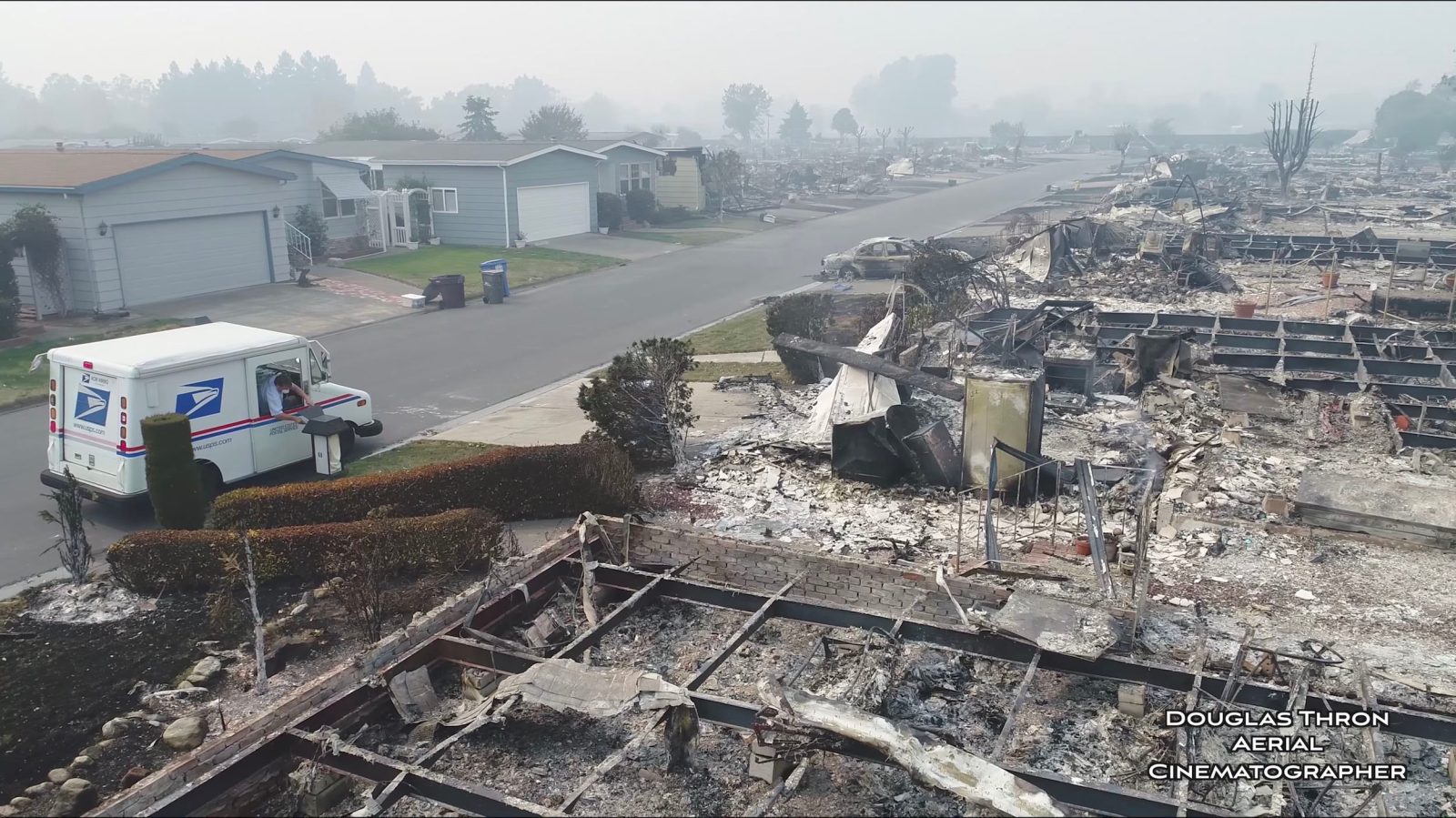 Even though most homes have completely burned to the ground and the homeowners have left, the mailman is still doing his rounds, as captured on video by drone pilot Douglas Thron. The almost eerie and apocalypse-like short film Thron uploaded to YouTube shows the extent of the devastation. Apart from the mailman doing his job, the streets show no sign of life. Houses are burned to the ground and skeletons of cars are still sitting in the driveways. Why would the USPS deliver mail to homes that no longer exist?

Why would the USPS deliver mail to homes that no longer exist?

The San Jose Mercury News answers that question. It reports that the USPS San Francisco District Manager Noemi Luna has issued a statement to clarify that the mail carrier in the footage was honoring a request by customers who would be returning for personal items.

“This is an example of the long-standing relationship that has been established between our carriers and their customers based on trust. The carrier in question was honoring a request by a few customers who were being let back in the fire zone to retrieve personal items. A few customers asked the carrier to leave their mail if the mailbox was still standing because they could not get to the annex to retrieve it.”

The famous words from The Persian Wars by Herodotus; it is chiseled in the granite edifice of the New York City Post Office on Eighth Avenue, seem very appropriate here.

“Neither snow nor rain nor heat nor gloom of night stays these couriers from the swift completion of their appointed rounds,”

Shortly after posting the video, Thron put this request for help in the comments and added a link to the Santa Rosa emergency site. He told the Mercury News:

“I’ve covered wildfires and floods before and I’ve never seen anything like it. I’d see areas that were totally fine, but then get to Fountaingrove Inn and The Hilton and see them wiped out. It was unbelievable.”

As in other emergency situations, such as Hurricane Harvey, the Federal Aviation Administration has also issued a Temporary Flight Restriction (TFRs) for the Santa Rosa airspace. However, according to the FAA website, these restrictions became effective on October 10 and will stay in effect for one month. Thron’s video seems to have been recorded on the 9th. On his website, Thron describes himself as an expert drone pilot and licensed by the FAA.

Since Thron’s video has reached so many people, whom may have contributed to the emergency fund, the video may have done more good than bad. Even though, the California fire officials have urged drone pilots not to fly. Their motto is:

State officials have confirmed that when a drone is “detected flying near or over a wildfire, air operations must be suspended until all drones flying in a fire area have been removed”.

These are not the first drone clips we have seen of the wildfires in California. On Monday we showed some initial drone footage that had surfaced. The wildfires in the wine country are said to be among the deadliest in the history of California. So far 31 people have been killed, some 20,000 have been evacuated and 3,500 homes and business have been destroyed. Investigators are trying to determine the cause of the fires. Increased winds are forecasted for this weekend and some fires are still ongoing.

Screenshots from the video clip