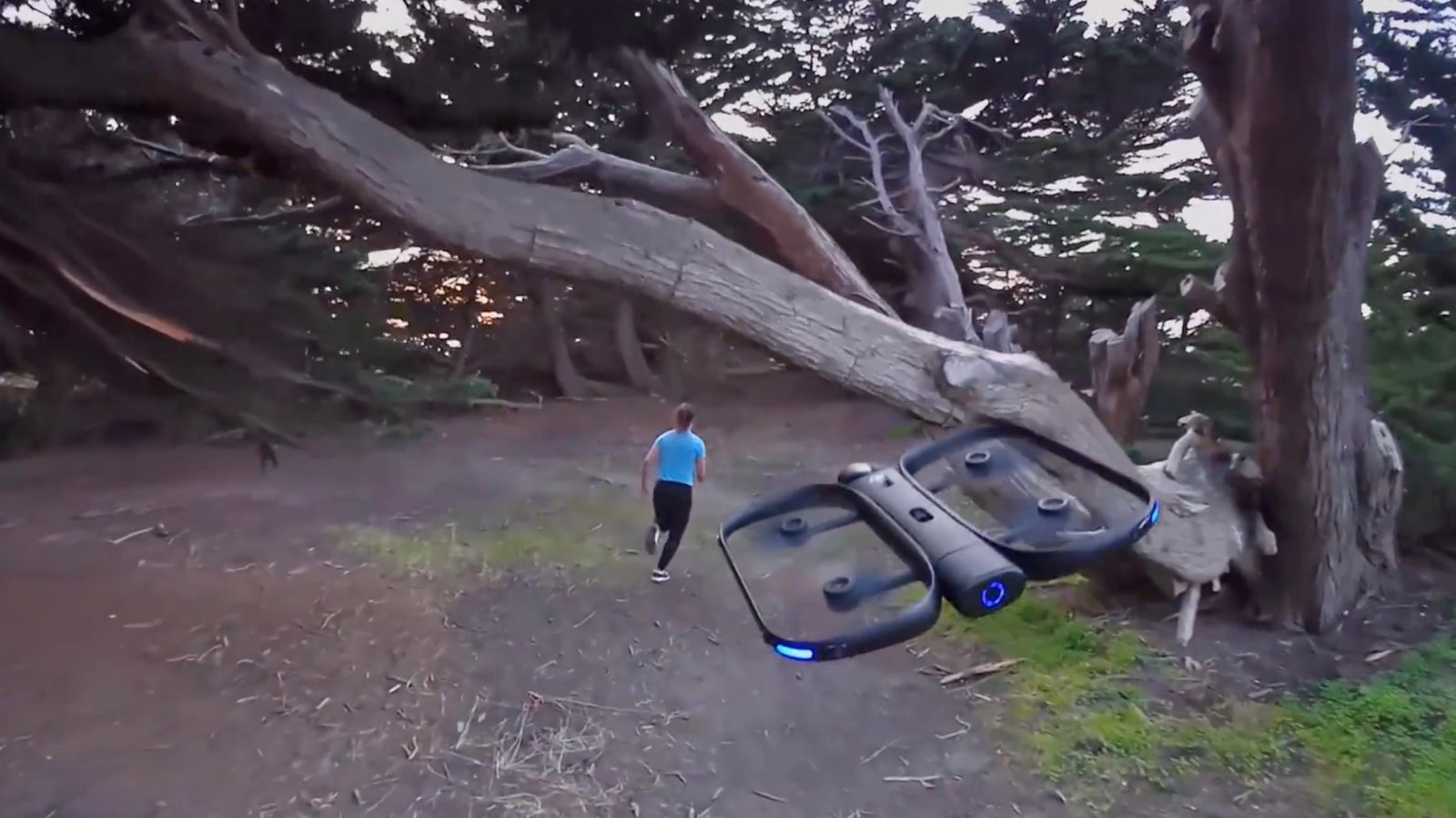 The Skydio R1 drone has been years in the making but it is here now! Our sister site, Electrek, first wrote about it when one of the senior engineers left Tesla to join the then start-up drone company.

What makes the R1 drone unlike any other drone you’ve seen, is its advanced obstacle avoidance system, the Skydio Autonomy Engine. With 12 cameras, the R1 creates a 3D map of its surroundings and tries to predict the movements of its subject, i.e. a skier, runner, biker, up to 4 seconds into the future so that it can follow the subject while keeping it in the center of the frame and avoiding obstacles at the same time. Impossible you say? Wait until you watch the video below. This is obstacle avoidance at a whole new level. Sorry guys, but the bar has been raised with the R1 drone from Skydio.

The autonomous Skydio R1 drone – the next level

Skydio was founded by Adam Bry, Abe Bachrach, and Matt Donahoe, who met as grad students at MIT where they worked on a high-speed autonomous flight project before they started Project Wing at Google. They then moved on to found Skydio to create a fully autonomously flying drone, which is a big step up from obstacle avoidance, and it seems that they have succeeded.

Now, of course, most of us know obstacle-avoidance from DJI’s drones. Even though that system is quite good and has helped save many drones from hitting walls, trees, and whatnot, it is not quite autonomous flight.

DJI raised the bar recently with the introduction of FlightAutonomy 2.0 on the DJI Mavic Air. FlightAutonomy 2.0 uses the primary gimbal camera together with the forward, backward, and downward dual-vision sensors and downward infrared sensing system to create a 3D map of the drone’s surroundings. DJI calls this technology Advanced Pilot Assistance Systems (APAS). And to be honest, when we saw it in action on the Mavic Air during the DJI event we were impressed. When it was my turn to fly, the drone ‘sensed’ the obstacles and flew around and over them, while I kept flying forward in a straight line. Impressive for sure, but this is semi-autonomous flying at best. 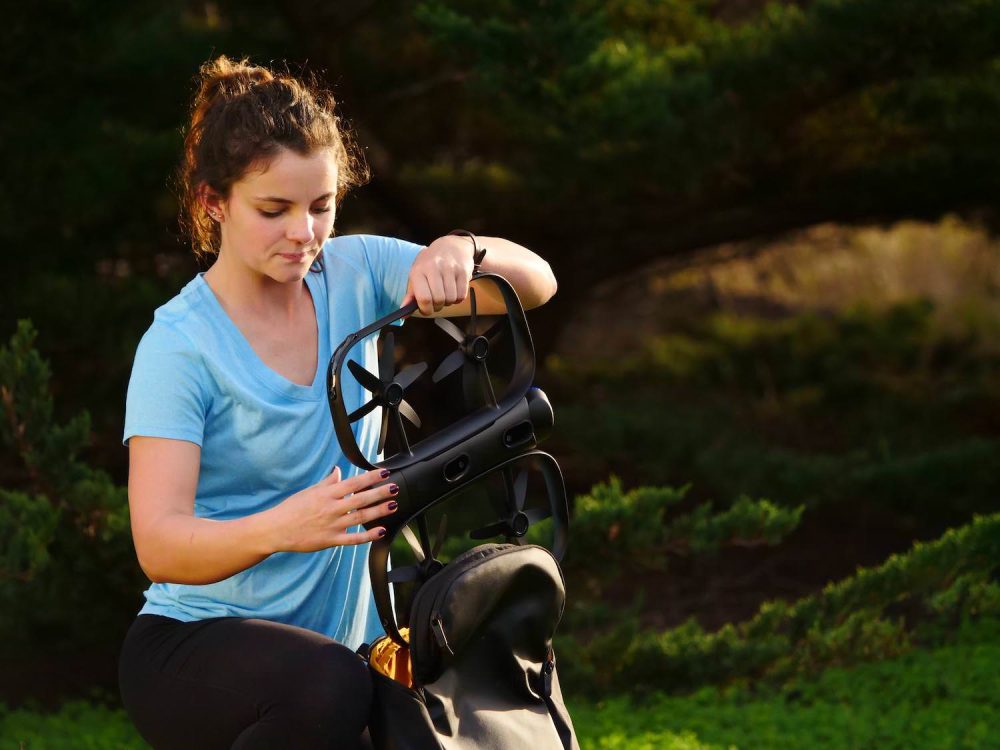 Skydio takes avoiding obstacles to a whole new level. The shape of the aircraft reminds you of the Hover Camera Passport drone, although the R1 doesn’t fold up. It has 12 cameras integrated into the frame of the drone, allowing it to view its surroundings in all directions. The cameras work together and provide all the visual information to the 256-core Nvidia TX1 GPU, which is the same processor found in self-driving cars.

According to co-founder Adam Bry, the drone then uses a combination of deep neural networks to recognize people around it. The drone knows what people look like and it creates a visual identifier for every person so that it can keep its focus on the right subject.

The drone’s motion planning system turns all this information into useable action. It balances avoiding obstacles, keeping the subject in view, recording video and forecasting how the drone should behave by predicting the subject’s motion up to 4 seconds into the future. The planning commands get turned into action in the physical world, into rotor speeds and gimbal actions. the result is simple as the drone moves in a very smooth way to capture amazing video. 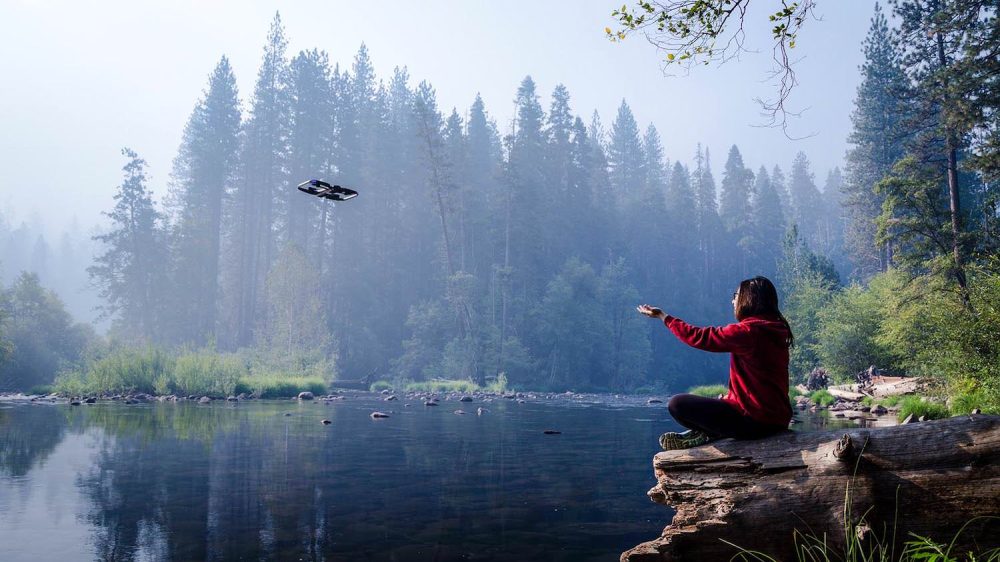 Does this mean that you cannot fly the R1 yourself? No, you can still do that, but Skydio designed the drone to fly autonomously. Launch it and forget about it. It will fly, film and follow you for about 16 minutes before the batteries are depleted. The R1 can follow you, orbit you, film you in profile perspective or from high above. It can even fly in front of you, which probably will provide the most appealing video footage.

Bry did point out that there are situations where the drone might run into trouble. For instance, thin wires or branches may be difficult to spot. Glass surfaces or crowds of people are also situations that may confuse the drone. If the R1 cannot figure out what to do next, it will let you know on the controller.

Visually identifying objects is dependent on the color of the item, the background color and the speed of the drone. Also, moving objects such as a ball or frisbee are hard to detect. Bry does feel confident that the performance of the drone in these areas will improve over time.

Note: more videos can be found on the Skydio YouTube channel.

The Skydio R1 drone comes equipped with a 4K, 30fps gimbal stabilized camera (in addition to the 12 cameras used for autonomous flying) and can be flown straight from your smartphone. As an autonomously flying drone, there really is no need for a separate controller.

The R1 is made with aerospace materials, including lightweight aluminum and carbon fiber and it can be launched from any flat surface or from your hand. It has several different flying modes available: follow, lead, side, orbit and tripod. You can select these features on your phone. You can also tap to follow, adjust the angle of the shot or take full control and fly the drone yourself while keeping the obstacle avoidance activated. 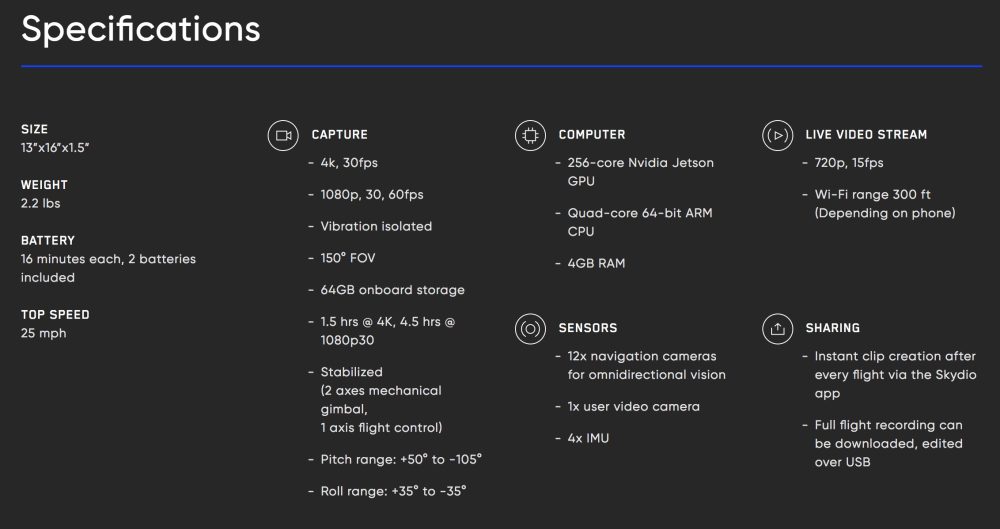 Today, the Redwood City, California-based company Skydio launches the Frontier Edition of the R1 drone. You can order it online starting today and it will ship in the next few weeks. The drone comes with two batteries that provide 16 minutes of flight time each. It also has 64GB of internal storage for video footage. The price of the R1 drone is $2499.

As a snowboarder and kiteboarder myself, this is what I dream about when I think about drones. The ability of a drone to fly around you by itself and capture smooth video footage is simply amazing, and I am sure many people will agree.

We will have to wait until we have one of the R1’s in our own hands to see how well it actually works, but based on these videos it sure looks very impressive. As far as obstacle avoidance, the bar has been set. It will be interesting to see how other drone companies will respond to this. Of course, we are looking at DJI here as well.

$2499 is a high price to pay for a drone. However, if you compare that to the small film crew you would need to capture video footage as shown in Skydio’s videos, the drone is a steal. In short, it all depends on what you are planning to do with the drone and whether that justifies the two and a half thousand dollar price point.

I can’t wait to see this drone in action myself. 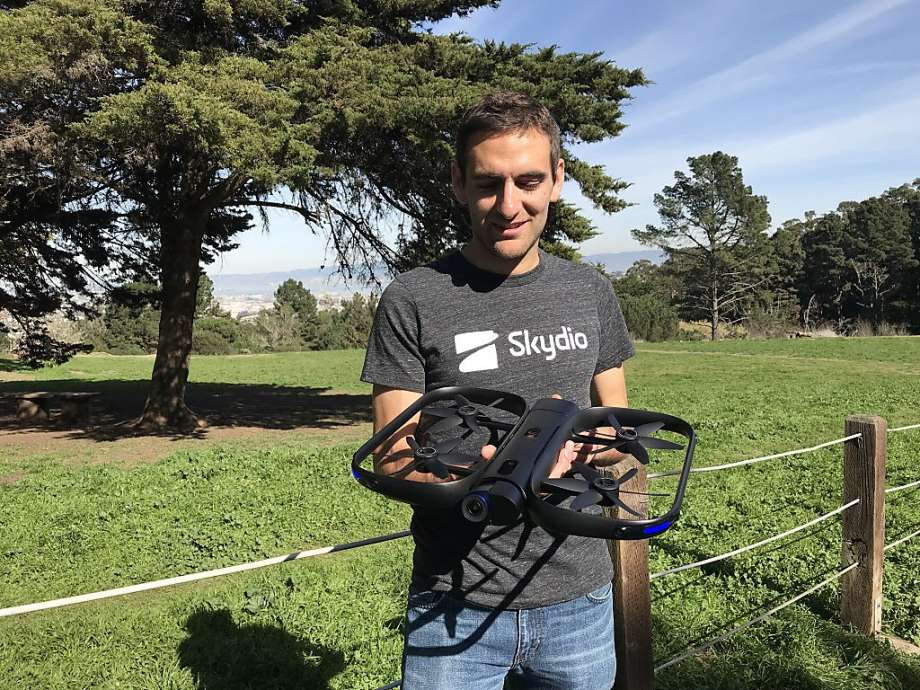