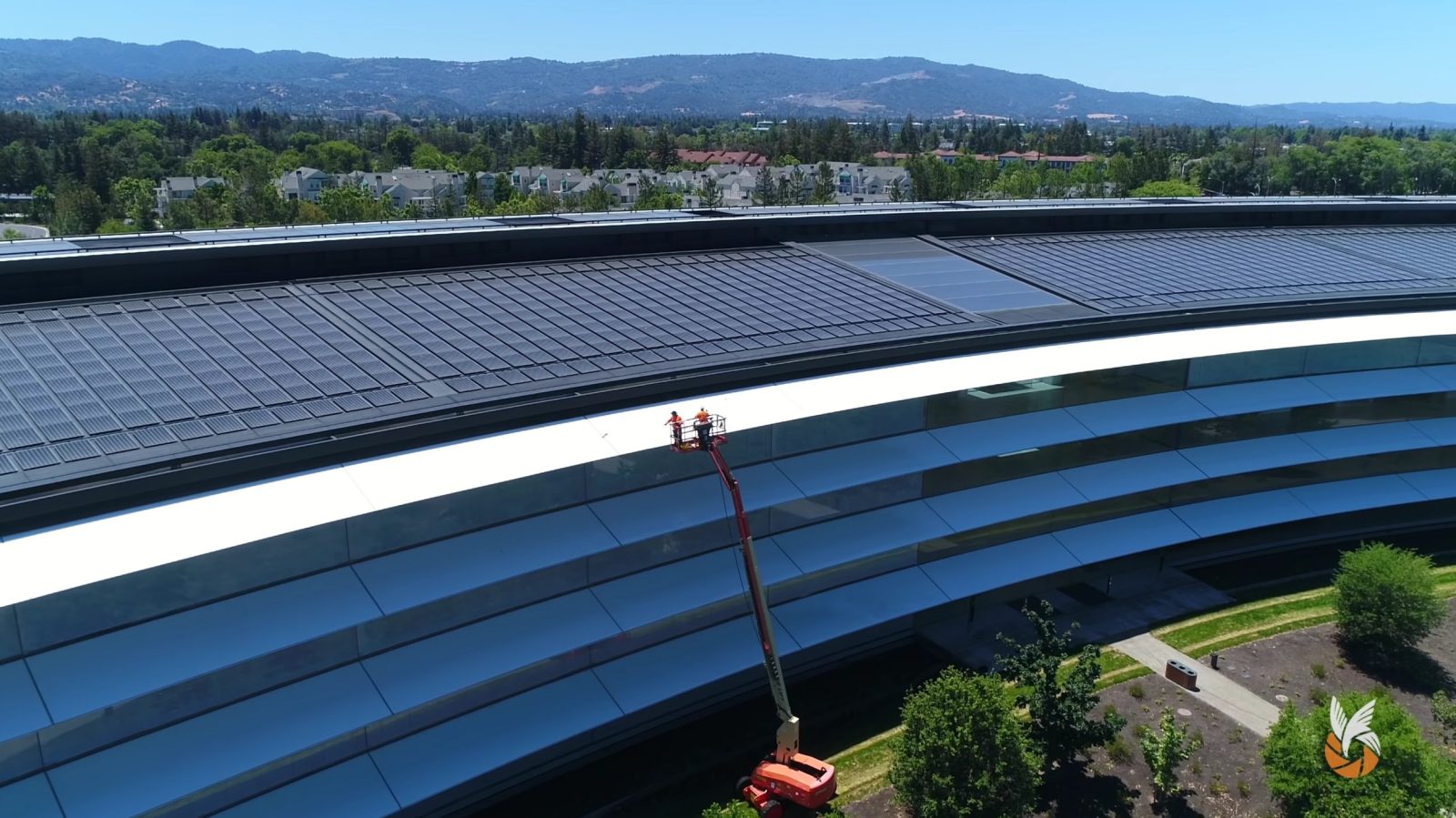 Yesterday and today two new drone videos were posted on YouTube, that show the Apple’s head offices being cleaned and prepped ahead of this year’s WWDC 2018. The first video was shot by Duncan Sinfield with the DJI Inspire 2 and the Zenmuse X7 camera and the second video was shot by Matthew Roberts, who used a Phantom 4 Pro to capture the spaceship-like building. Surprisingly it is still possible to fly your drone over Apple’s office building, in Cupertino, California, after a DJI Phantom 4 crashed on top of the roof back in February.

Sinfield writes about the building that it “continues to evolve” and that about 9,000 trees have been planted on the 175-acre site and that the building was cleaned ahead of Apple’s Worldwide Developers Conference, which is taking place at the McEnery Convention Center in San Jose.

“One day ahead of WWDC 2018, Apple’s new HQ continues to evolve. Some 9,000 trees are now permanently planted on the 175-acre site. Employees continue to relocate into the “spaceship” every week. Crews work 24 hours per day to maintain all aspects of Apple Park, including washing the window shades at least once per week.” – Duncan Sinfield

It seems likely that the videos were shot on the same day as we see the same cleaning crew in action. Maybe one day in the future this building will be cleaned by drones like this one?

The videos also allow us to do a quick comparison between the quality of the DJI Phantom 4 Pro with a 1-inch sensor versus the Zenmuse X7 with the larger Super 35 sensor. Both videos are high quality and show great detail, although the clip that was shot with the Inspire 2 seems to show slightly better sharpness with more detail and is less contrasty and also less saturated. Of course if is hard to compare both videos as we have no information on which settings were used while shooting the video, or what was done in post-processing to boost the colors, and increase the sharpness. Furthermore uploading videos to YouTube impacts the quality as well due to compression.

Over the last few years, both Sinfield and Roberts have put together an impressive list of drone videos showing the development of Apple’s spaceship-like office building. Sinfield mentioned earlier this year that increased security is making it harder to fly drones over the building and he believes it will be “only a matter of time until the campus becomes shut-off to drones completely.” In the comments of the video from April 16th he also mentions that:

“Security at Apple Park generally responds in two white Prius’s to my precise take-off locations in 10 minutes or less. While this is speculation, my instincts tell me that Apple is tracking all drones in the vicinity of the campus with sophisticated radio frequency technology from companies such as DeDrone (a San Francisco-based aerospace security company). As always, I respect all requests by Apple Security to land my drone and leave the area when asked to do so. They are always asking if I’m an Apple employee too. So to all of the Apple Employees watching (and reading), don’t fly your drones over The Park, it’s frowned upon!”