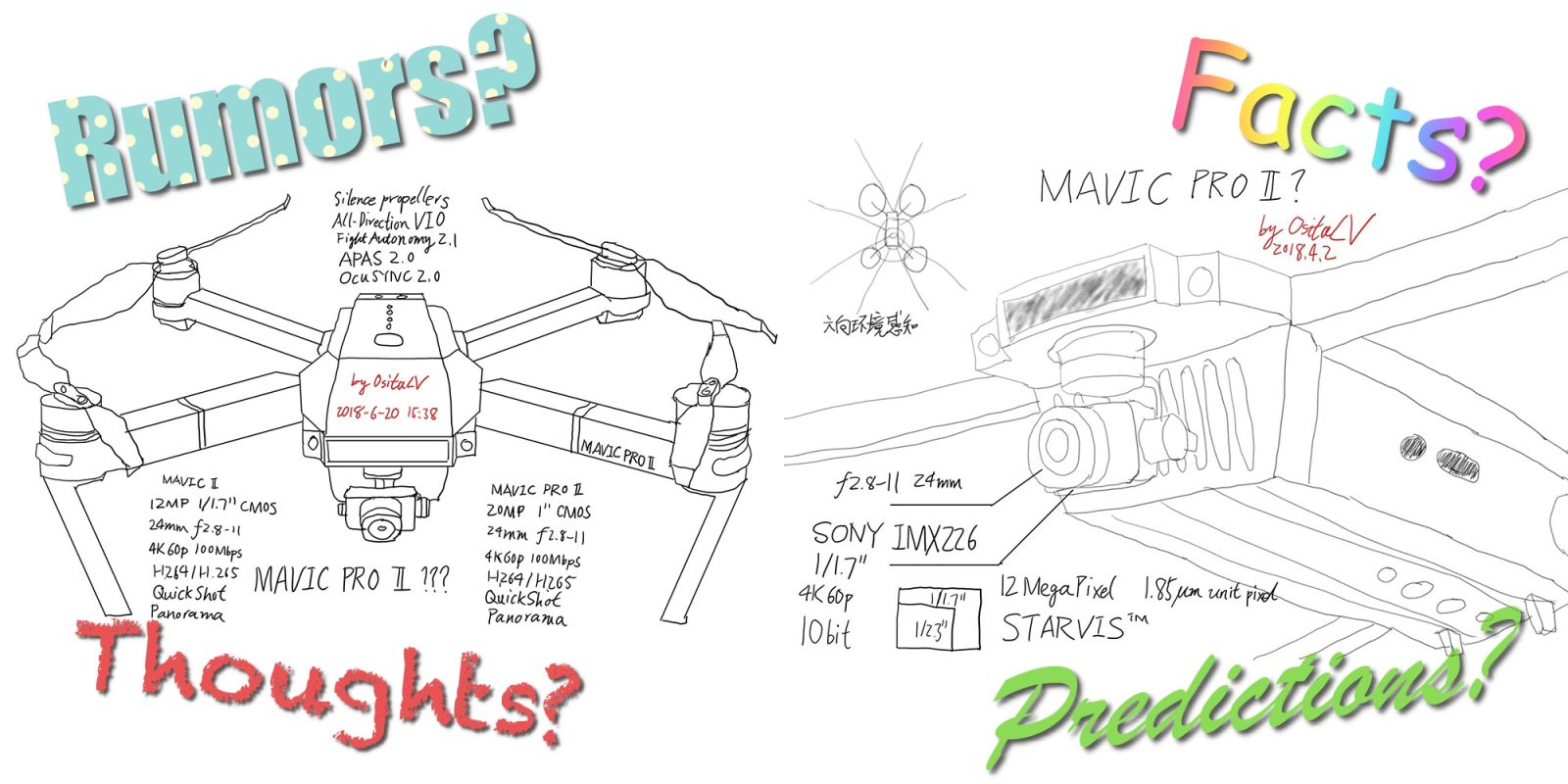 On July 18th, DJI will introduce a new product that is widely expected (see poll here) to be the successor of the current Mavic Pro, the Mavic Pro II. As we get closer to the release date, the rumors are becoming more frequent and more detailed as well. We saw the same thing happen in the weeks before the Mavic Air was released back in January. Today, we have seen these latest rumors on Twitter that we believe are worth sharing with you. One of them being that the new Mavic Pro II (2) is likely to have all-around obstacle avoidance. Another one, speculating that there might be two versions.

Let me start by saying that the rumors come from @OsitaLV. As you probably know, he has been right in the past. He has been wrong in the past and he has played jokes in the past. However, he is a lot closer to the action (physically) then most of us and we, together with almost 6,000 other Twitter followers, do think that there may be some merit to his ‘predictions’ and ‘earlier thoughts’.

One reason is that he refers to “some 1st class resellers” that supposedly already flew the new drone earlier this week, which might well be true. We received an invite from DJI to be present at the main event on July 18th, but also to join an earlier event on July 11th, which is for select press and media members only. It does not seem unreasonable to think that DJI would have invited some its most important resellers to get an early preview and some hands-on experience with the new drone so that they can go ahead and start placing their orders with the Chinese drone-maker.

Details of the rumors

So with that out of the way. Let’s take a closer look at what @OsitaLV thinks that may be part of the new DJI Mavic Pro II (2) drone. In a series of tweets, he mentions the following:

“Some 1st class resellers have flown the thing this week. For machine vision of MPII, it will be highly identical to my earlier thoughts if they tell the truth.

@OsitaLV seems to think that there may be two different versions of the Mavic Pro II (2). In his drawings, he provides details of what he expects may be presented at the launch event.

Both models would have:

Furthermore, @OsitaLV keeps drawing a drone that looks exactly like the current Mavic Pro. It seems highly unlikely that the successor would carry over this ‘outdated’ design and form factor. More likely the new design will be sleeker and more aerodynamic. During our conversation with Michael Perry at the Mavic Air launch event, he told us that the internal components for controlling the drone and processing the images had become so much smaller and generate significantly less heat, that it allowed for much better design. Something that was not yet possible with the first iteration of the Mavic Pro. I fully expect the successor to look very different from the current version.

What do you think?

SInce @OsitaLV has been a controversial ‘leaker’ or ‘source of information’ in the eyes of many, maybe it would be interesting to hear from you, our readers. So, please let us know in the poll below what you think about the information he has provided so far and how much trust you put in him. Thank you.

Remenber, my thoughts are only for reference. Everything is subject to the real product.
Maybe there are 2 kinds of Mavic Pro II. pic.twitter.com/fBYRaVN3Dq

Some 1st class resellers have flown the thing this week. For machine vision of MPII, it will be highly identical to my earlier thoughts if they tell the truth.
1.Front, buttom and rear binary VIO
2.Infrared TOF sensor on the top
3.Large caliber mono VIO on both sides pic.twitter.com/o0T8hfJ2QC