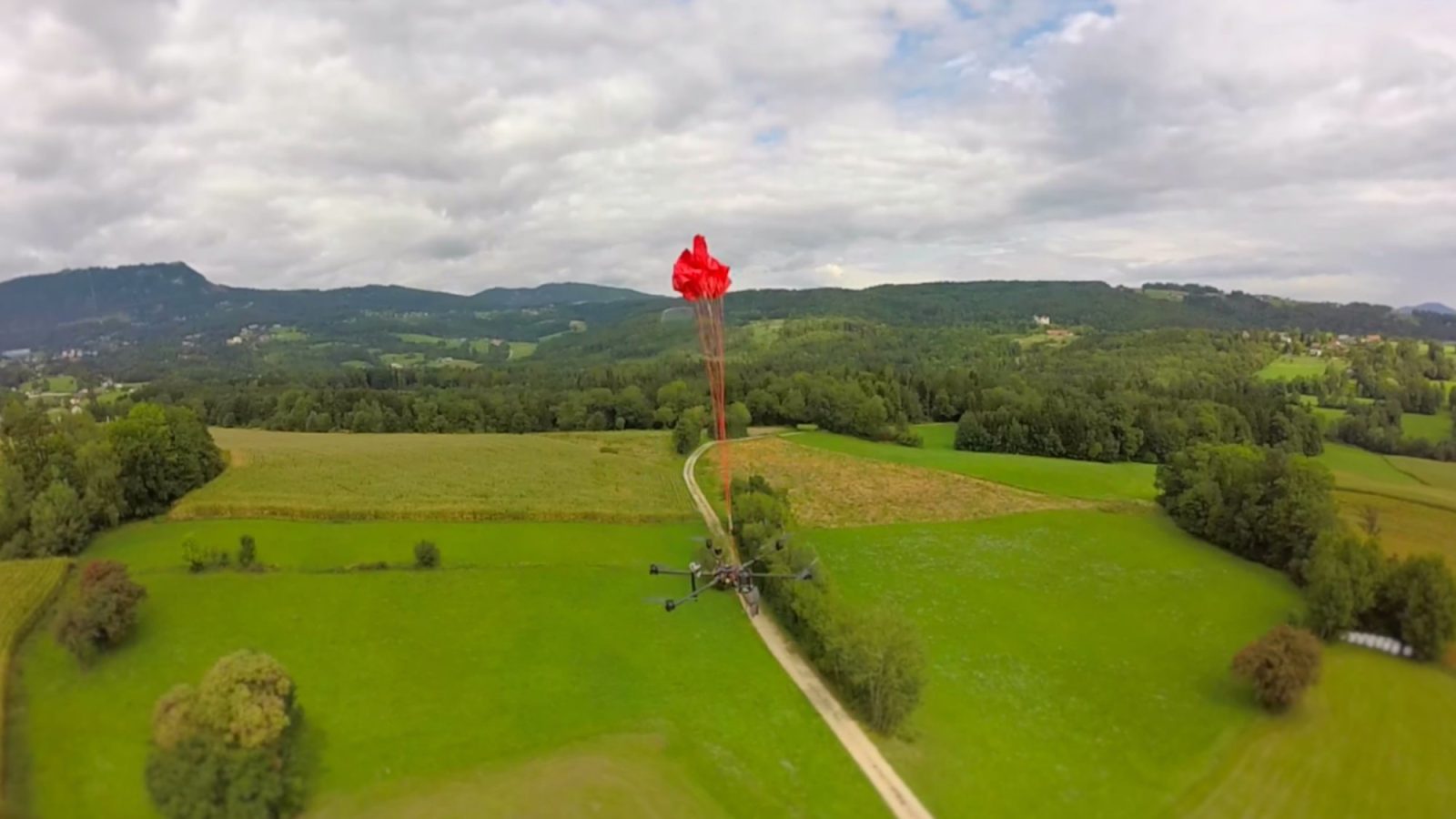 A drone falling from the sky not only has the potential to hurt people on the ground but also to hurt your wallet. Especially when we’re talking about the larger drones, such as the DJI Matrice 600. The Austrian company Drone Rescue introduces three new parachutes for multicopter drones during the Intergeo 2018 in Frankfurt today, the DRS-5, the DRS-10 and the DRS-M600.

On Tuesday the company held a public demonstration of the DRS-5 and DRS-10 parachute modules. Both models are very similar in design but differ in the maximum weight of the drone they can support. The DRS-5 can support drones of up to 8 kg (18 lbs) and the DRS-10 is built for drones between 5 and 20 kg (11 and 44 lbs).

The parachute models are housed in a carbon cage along with sensors and controls that work independently of the unmanned aircraft. As soon as the Drone Rescue parachute system detects that the drone is in trouble, it will deploy the parachute electronically within milliseconds. The system not only deploys the parachute, but it also cuts the power to the throne to stop the rotors from spinning to prevent the parachute lines from getting tangled or anybody getting hurt on the ground.

Drone Rescue also announced the DRS-M600 which is a different version of the DRS-10 parachute module specifically made for the popular DJI Matrice 600 (M600) drone.

The Drone Rescue parachute module also includes a black box flight data recorder that monitors GPS data as well as the altitude and acceleration of the unmanned aircraft. According to the company potential insurance claims are the main reason that the black box is included in the module.

“Our system has the advantage that it manages completely without explosive, pyrotechnical solutions,” Drone Rescue Andreas Ploier explains in a press release. “Consequently we have a system that is considerably lighter, and functions even in a worst-case scenario.” This means that, having deployed, the modules don’t need any parts to be replaced. It’s simply a case of re-packing the parachute, which Drone Rescue claims is the work of a few minutes.

Together with Joanneum Aeronautics of Graz, Austria, Drone Rescue has tested the DRS-5 over 100 times successfully with drones weighing less than 4kg (9 lbs). Each time the parachutes deployed and the Drone landed safely.

Drone rescue is expecting to ship the first parachute modules to customers during the last few months of this year.