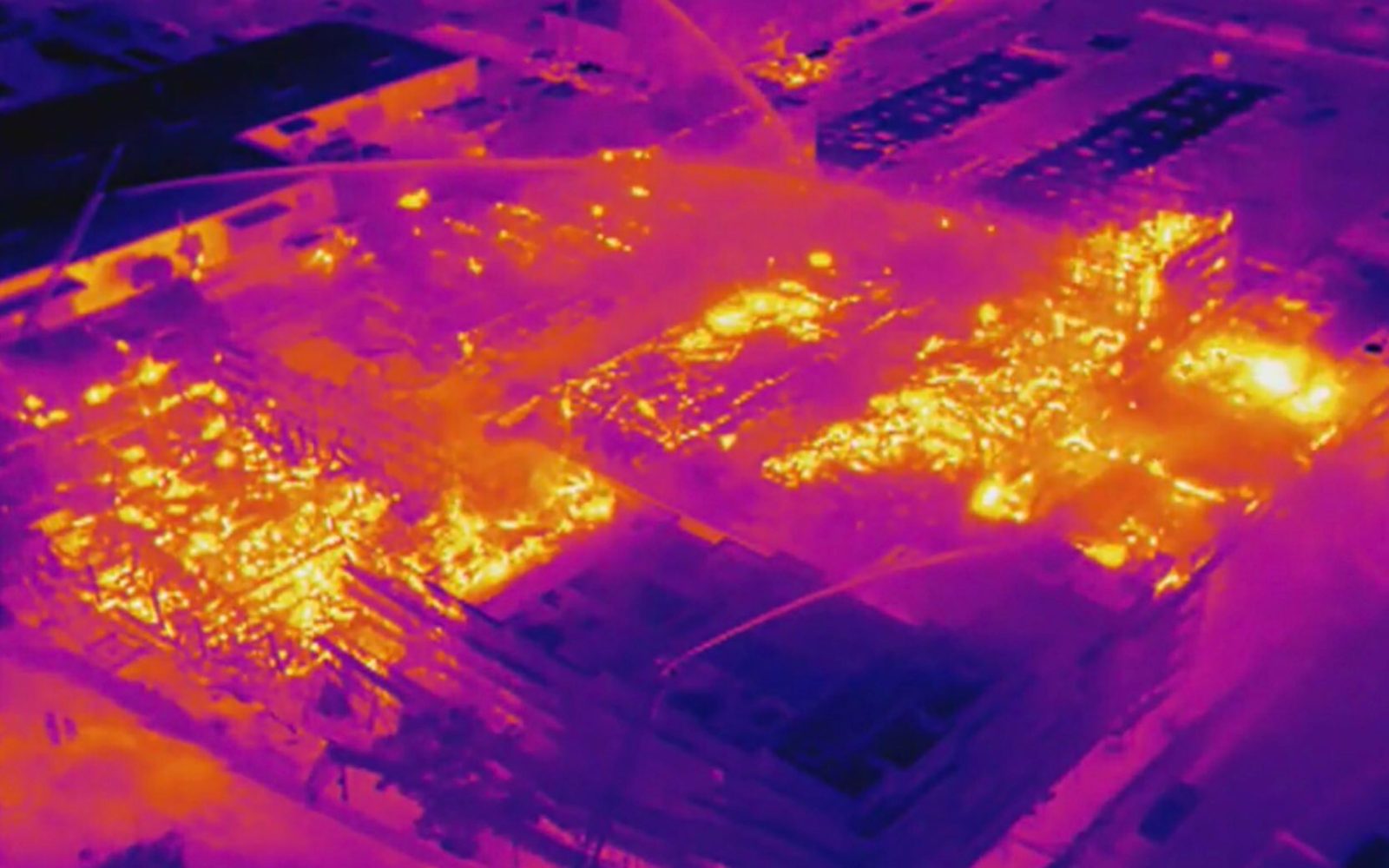 Oakland firefighters have been battling a massive fire overnight at a construction site where townhomes are being built. The fire was reported at 2 a.m. this morning. About 90 firefighters were on the scene as the massive fire ripped through the townhouse construction site located at West Grant and Filbert Street in Oakland, Calif. The Alameda County sheriff’s deputies brought a DJI Inspire 1 in to get footage of the fire. The drone equipped with a thermal camera shows exactly where the hotspots are.

According to Department chief Nick Luby, the fire went up so quickly because of the construction supplies.

“So basically it was just a big pile of kindling- 2×4’s and small timber and a lot of air in there and it can circulate and get the timber going real quick and then it grows quickly,” he said.

Power company PG&E shut down the power for about 2,200 customers as firefighters were battling the fire. Near Myrtle Street, about 30 homes were evacuated out of fear of the fire spreading.

A second fire starts in Oakland

Only a few blocks away at 3266 Peralta Street, another fire broke out at a residential construction site later this morning. According to the firefighters, it was a small fire that was already out by the time they arrived. However, they did see some suspicious looking evidence and called for investigators. In recent years more residential construction sites in Oakland have been going up in flames. Today’s two fires mark number six and seven and both are currently under investigation.

“In addition, we had a report of attempted arson at 3266 Peralta and so with that – we are on heightened alert and awareness to try to ensure that we do our due diligence to understand what happened here and whether or not the two incidents are related,” said Oakland Fire Chief Darin White according to ABC7News.

To assist the firefighters, the Alameda County sheriff’s deputies brought a DJI Inspire 1 drone in to get footage of the fire. The drone equipped with a thermal camera shows exactly where the hotspots are.

In the video below you can see what the drone pilot saw on his screen. The thermal camera has a number of different ways in which the information can be displayed. Depending on the circumstances, certain settings may help the operator get a better understanding of what is happening on the ground. You can see the operator flick through the various options at about nine minutes into the video. The DJI Inspire 1 was flown by the Alameda County Sheriff’s Office and released by Alameda County Fire.

Alameda county sheriff’s deputies brought a drone in to get footage above the fire to help Oakland firefighters as they battle the huge fire. pic.twitter.com/bBkrlj26cg

Today’s large fire in Oakland, CA seen via @DJIEnterprise drone equipped with @flir thermal sensor, flown by @ACSOSheriffs and released by @AlamedaCoFire – see how helpful this view is for public safety? #DronesForGood pic.twitter.com/hqtmcDaqpA