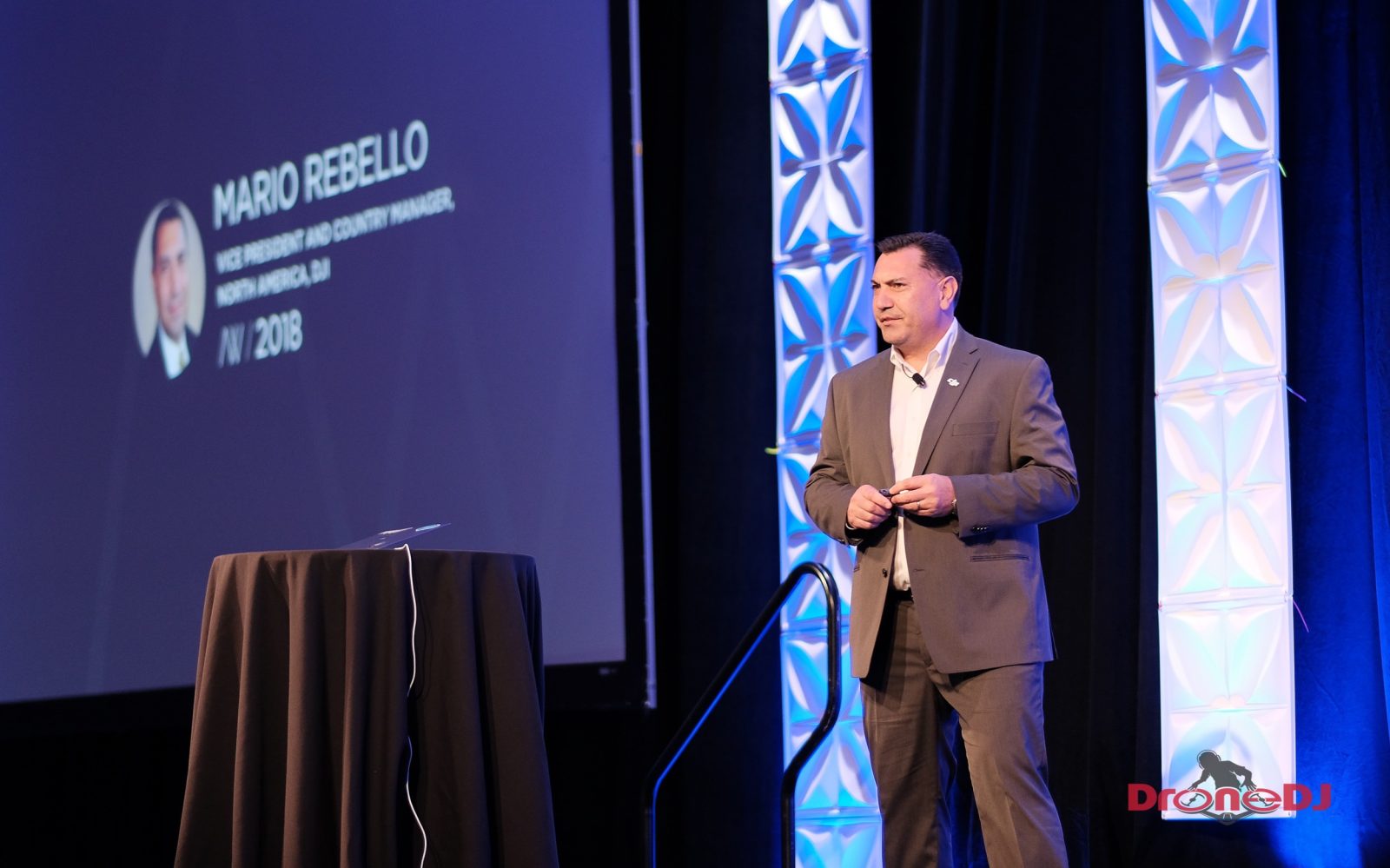 Here we continue with Part II of the coverage of the DJI AirWorks event in Dallas, TX. For Part I click here. The second half of DJI’s keynote started with Mario Rebello, DJI’s Vice President and Country Manager of North America. Let’s jump right in.

After the break, Mario Rebello, DJI’s Vice President and Country Manager of North America took the stage. He reinforced DJI’s commitment to innovation and said that the company has a:

DJI knows that drones are the future but, looks to their partners to show what that future will look like and how exactly their drones will be used. Rebello also said that DJI was at times misunderstood. He stated he wants to advocate for the company and stressed the benefits drones and DJI, bring to the people in what is their most important market, the US.

One of the things that Rebello pointed out was that the company grew to more than 14,000 employees, of which 20% are R&D talent. Towards the end of his presentation, Rebello spoke about the partnerships DJI has formed with companies such as FLIR Systems, Skycatch, and Propeller Aero.

Lastly, he stressed that with regard to data management and security issues, “DJI is committed to protecting the integrity of our end users’ data” and that the company “will continue to address and debunk every concern or allegation made against DJI.” Rebello continued to say that the entire company is ready to defend the DJI brand and “debunk the fake news that has been out there circulating for the past year.” A statement that, for a second, made me think that I was at a political event and not at the DJI Airworks conference.

Then Corey Hitchcock, the UAS Standardization Pilot for Southern Company took the stage. Hitchcock showed in his presentation how drones have become increasingly important in their utility business. They currently deploy 67 Part 107 pilots and have a fleet of 72 drones. One of the most interesting parts of his presentation was a story of how Southern Company had helped to run thousands of feet of lines to pull wires from mountain top to mountain top in Puerto Rico after the hurricane Maria disaster. Previously this was done with the help of a ‘potato gun’. Needless to say that the use of drones saved significant amounts of time and money.

Then it was Arnaud Thiercelin’s turn to talk to the audience about the five different sorts of SDK’s that DJI has developed in recent years. Initially, DJI was taken by surprise by the strong growth in the mobile SDK activations, which is now up to 4.7 million activations for 2018. Currently, there are more than 51,000 developers around the world working with DJI’s software development kits. 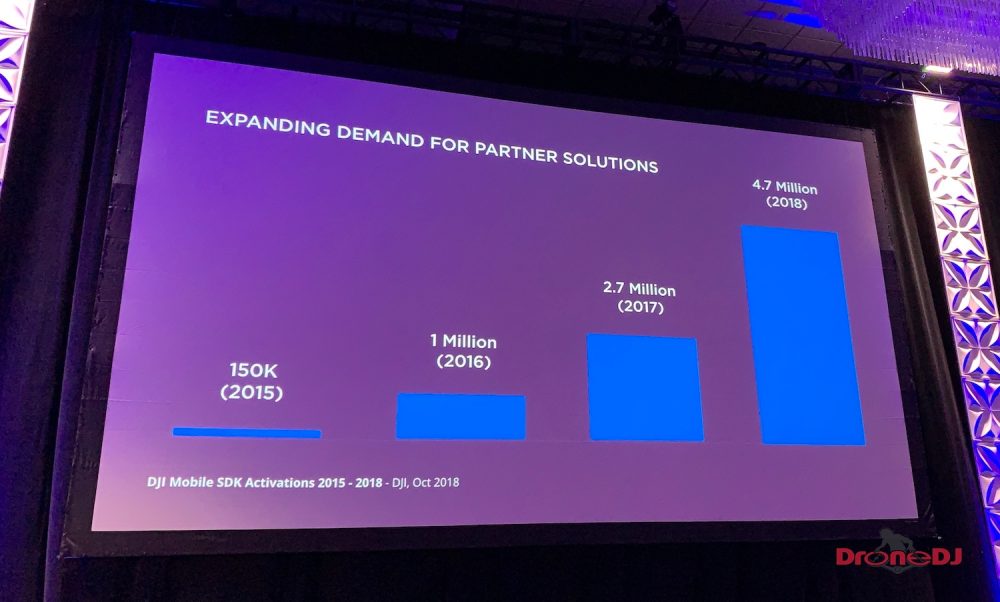 Thiercelin also quickly announced the Manifold 2 that allows your drone to process data onboard the aircraft. The Manifold 2 houses impressive processing power, similar to what is found in self-driving cars. 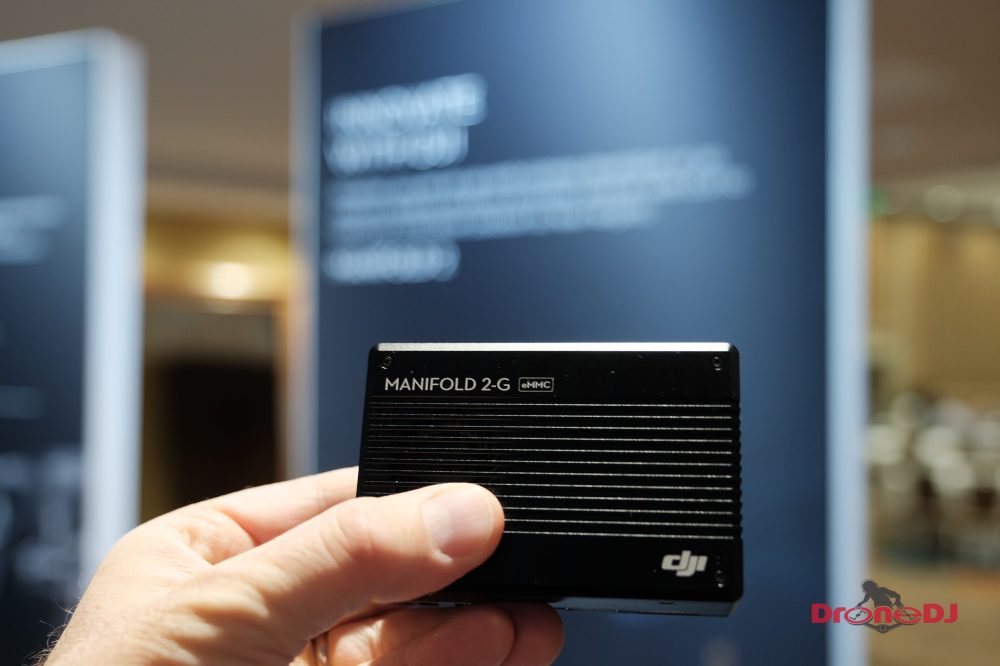 We first reported on DJI Terra back in November 2017 when it was still shrouded in mystery. Now, DJI made a quick announcement of DJI’s mapping initiative to “digitize the world”. Terra is a 2D and 3D mapping solution that will help users and developers digitize the world. It will be available in Q1 2019 and pricing will be made public at a later stage. It will be interesting to see what DJI’s plans are for the Terra software and how it may impact the existing drone mapping companies.

This concludes Airworks Part II. In Part III we will take a look at the keynotes from DJI’s partners Microsoft and Skycatch. For Part I click here. To be continued.