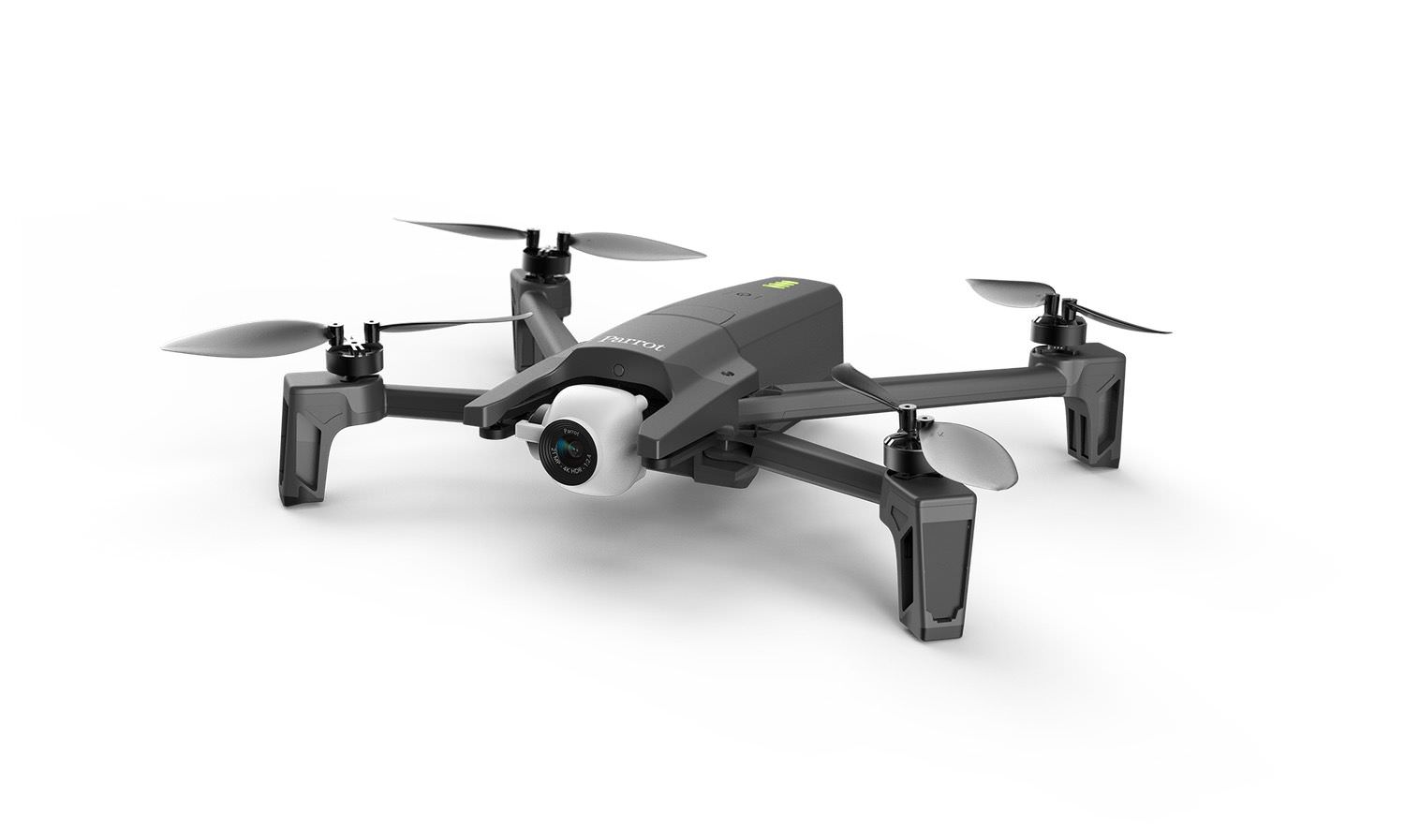 Despite positive reviews of the Anafi, sales at the French drone-maker Parrot have dropped by 40% compared to the same quarter last year. The company has reacted by announcing that it will cut 100 jobs. The market responded to the news by cutting the value of the French drone maker in half on the Paris stock exchange. The layoffs are bad news for the once-dominant Parrot, but the company’s troubles could provide a short-term benefit to consumers. The Anafi is now being sold for a fraction of the price that it was a few months ago. The Anafi is on sale for under $550 on both Amazon and Parrot.com.

Contraction of the Consumer Market

The Parrot Anafi ($549.99) is one of my favorite compact consumer drones. Parrot is still the only manufacturer to offer a 90-degree lookup angle and they were the first to include an automated dolly zoom feature. While the Anafi is not perfect, it certainly offers strong competition for DJI, Parrot’s chief competitor. Despite my affinity for the Anafi, sales have not met Parrot’s expectations.

The end of this year is being complicated by a significant and unexpected contraction of the consumer drone market. 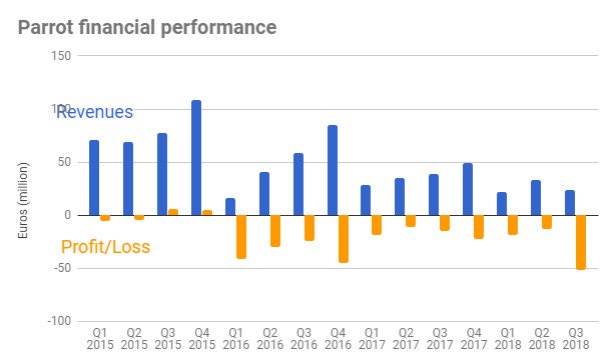 Parrot’s $59 million loss in the third quarter dwarfs last year’s loss of $14 million in the same quarter. Could this contraction be affecting all manufacturers, including market leader DJI? I do believe that DJI is also seeing a slump, but with 70% of the market, DJI is better positioned to weather the storm.

Some of the challenges at Parrot may have nothing to do with the Anafi, or with any of their consumer drones for that matter. The company’s commercial sales have also dropped 45 percent. Drones like the Parrot Bluegrass Fields face stiff competition and have yet to lift sales for Parrot. Parrot is not giving up, and they expect to push forward in growing the business in 2019. They plan to break even in the commercial business by the end of 2019. 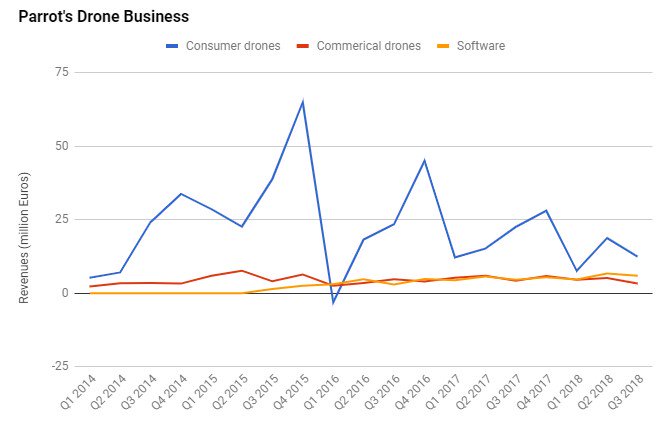 Parrot’s strategy for professional drones has historically included a pattern of modifying consumer drones and turning them into commercial products. The Bebop Pro Thermal ($1590) is a Bebop 2 ($249.99) with a fixed-angle FLIR thermal camera strapped awkwardly on its rear side. Parrot a lot more up their sleeve, and software could be the next big thing at Parrot.

Will Parrot abandon their consumer ambitions to focus on the higher margins in the commercial market?
The growth of Parrot’s software business has been a bright spot for Parrot in 2018, with year-over-year growth of 28%. This growth story is led by the success of market-dominating Pix4D. Software remains a relatively small portion of Parrot’s overall revenue stream, but it is poised to take off. Pix4D is the go-to software solution for most pilots of DJI products, so the market is large and growing. I expect the market to explode in the next two years, led by the Phantom 4 RTK in 2019.

This is the second recent layoff at Parrot. Last year Parrot cut nearly 300 jobs. With this new round of cuts eliminating 100 jobs, Parrot’s numbers are dropping significantly from their current staff of 658 employees. The French drone maker was able to churn out the Anafi with a reduced staff, but it’s not clear that innovations like the Anafi will be possible if their numbers continue to dwindle.

Luckily the layoff affected mostly Parrot’s international marketing staff. Let’s face it, Parrot could anyway use a refresh in their marketing strategy. The fragmented sales strategy and sub-par website do nothing to help Parrot’s consumer sales. I don’t see any major decrease in Parrot’s R&D spend indicated in the quarterly report. 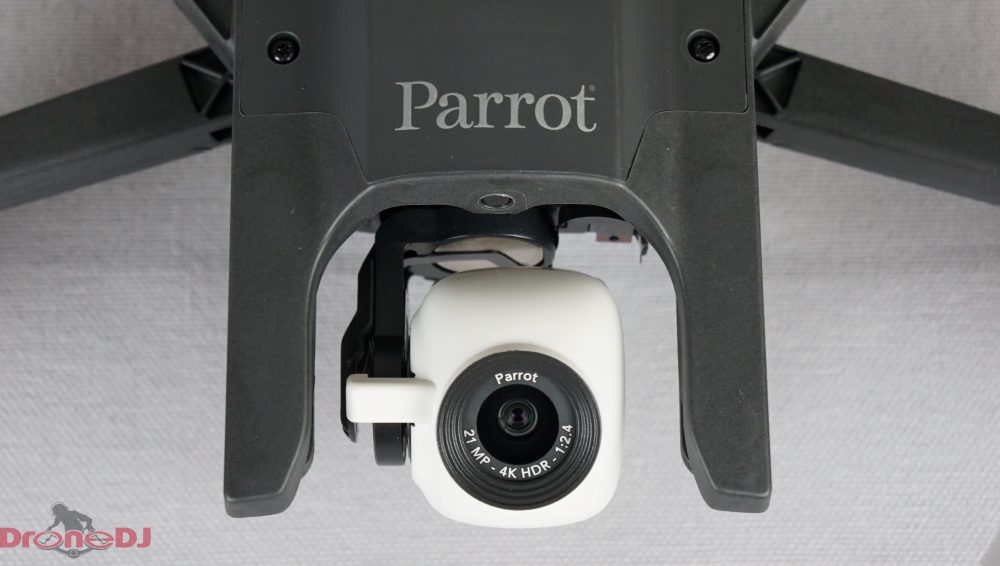 Your drone can’t do this. The Parrot Anafi camera has a 180° pitch angle range thanks to an innovative design.

Will Parrot abandon their consumer ambitions to focus on the higher margins in the commercial market? I hope not. While Parrot has not had the success of DJI, I am hopeful that they continue to provide real competition. In the meantime, now there is a great opportunity to save on a great drone, the Parrot Anafi.

The Anafi is currently on sale at both Amazon and Parrot.com.