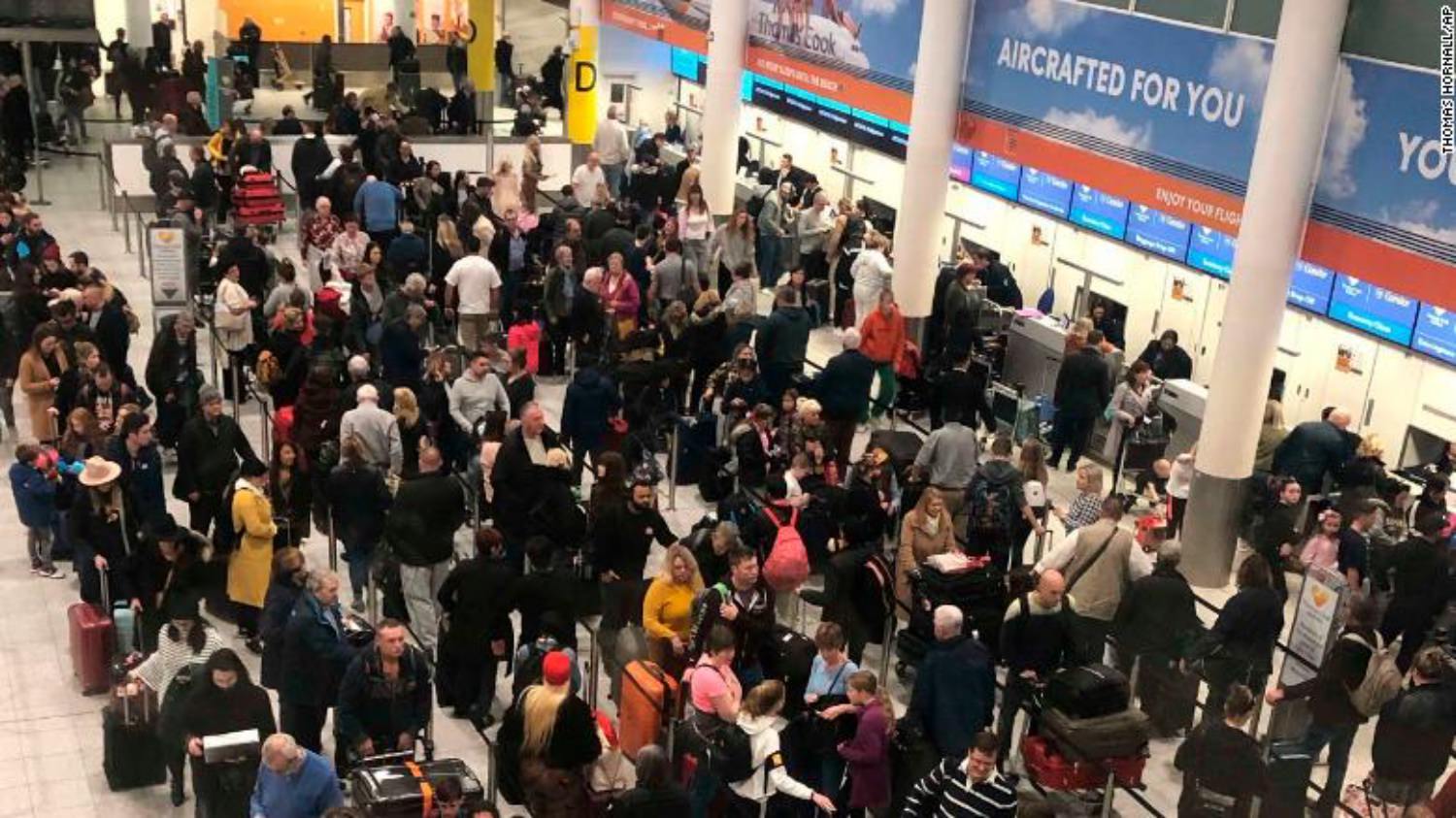 Drones have caused chaos for many thousands of holiday travelers at London’s second-busiest airport. Officials of London’s Gatwick airport have said that 110,000 passengers and 760 flights are scheduled today. However, because of the multiple drone inferences currently, none of these flights can take off or land. The first delays caused by the drones happened late last night. Normal flight operations resumed around 3 am, only to be halted again an hour later when a drone was seen again.

Flights to and from Gatwick Airport are disrupted

Airport Operating Chief, Chris Woodroofe told BBC News that two drones were spotted flying “over the perimeter fence and where the runway operates from.”

Woodroofe called the actions of the drone pilots “irresponsible” and said it could take days for the airport to resume normal operations during the busiest travel time of the year.

According to police in neighboring Sussex, there is no sign that the drone incident is terror-related. However, the drone activity is labeled as suspicious. They described it as “a deliberate act to disrupt the airport”, but “there are absolutely no indications to suggest this is terror related”.

According to the Telegraph, Woodroofe continued to say:

“Last night there were 10,000 people disrupted. There were 6,000 people flying in from around the world to Gatwick who were diverted to alternative airports as we closed, there were 2,000 people who didn’t take off from their origin airport and there are a further 2,000 people here who couldn’t fly to their destination because the airport closed.”

According to Woodroofe, 20 police units from two forces were hunting for the pilot. He added:

“The police are looking for the operator and that is the way to disable to drone. We also have the helicopter up in the air but the police advice us that it would be dangerous to seek to shoot the drone down because of what may happen to the stray bullets.”

Justin Burtenshaw, the official in charge of the investigation said:

“We are still getting sightings of the drone in and around the airfield. Each time we believe we get close to the operator the drone disappears and when we look to reopen the airfield the drone reappears, so I’m absolutely convinced it is a deliberate act to disrupt Gatwick airport.”

“It is totally unacceptable to fly drones close to airports and anyone flouting the rules can face severe penalties including imprisonment.”

#GatwickDrones | The #drone image in our previous tweets was used for illustrative purposes only and not the devices being sought. It is believed that the #Gatwick devices used are of an industrial specification. We are continuing to search for the operators pic.twitter.com/NBW6Oh1M3c 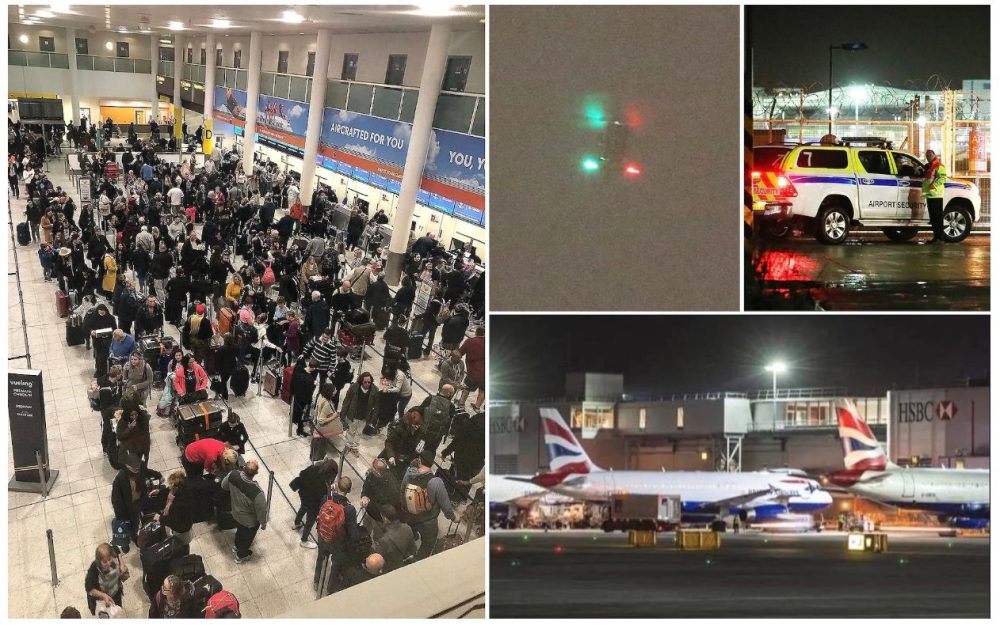 As many of our readers will know, drones can be used for good in many different ways and many lives have been saved with the help of drones. However, drones have also been a cause of great concerns for many manned aircraft pilots, crew, airport, safety and security officials around the world. The unmanned aircraft because of their compact heavy metal parts such as batteries are deemed to be more dangerous to manned airplanes than birds.

The Gatwick Airport remains closed for now. Many flights have been re-routed to nearby airports such as Heathrow, Luton, Birmingham and Manchester but also as far away as Amsterdam and Paris. Officials are hopeful that the airport will reopen early this morning.

Drone incidents like this one at Gatwick Airport will likely lead to more safety officials and politicians calling for more strict rules and requirements, such as Remote ID, for drones and drone pilots.

Already, Theresa May’s official spokesman has said that the drone activity at Gatwick was “irresponsible and completely unacceptable”. According to the Telegraph, he continued to say: “These drones have been flown illegally and the law couldn’t be clearer that those found endangering aircraft could face up to five years in jail. We are in close contact with Gatwick Airport as they work with police to safely resolve the situation as quickly as possible.”

Parliamentary Under-Secretary (Department for Transport), Baroness Sugg said that the disruption at the airport was extensive and that the police operation was ongoing. She also said that anyone endangering a manned aircraft could face up to five years in jail. She continued to say that the Government “absolutely need to make sure that we introduce new laws to ensure drones are used safely and responsibly” after tougher controls were brought in earlier this year.”

(1/2) It is totally unacceptable to fly drones close to airports and anyone flouting the rules can face severe penalties including imprisonment.

The @UK_CAA is offering advice to passengers impacted by the disruption at Gatwick Airport.

Please visit the following website to find a leaflet on your rights as a passenger: https://t.co/9hxLyyJBvB.#Gatwick #Gatwick_Airport pic.twitter.com/ljUaFDKcMo

(2/2) The rules for flying drones are designed to keep all airspace users safe.

The CAA's Dronecode provides advice on how to fly your drone safely and follow the rules. you can see it at: https://t.co/avAtyxPdQZ.#Gatwick #Gatwick_Airport

Sorry about that, Elly. Gatwick have stopped all arrivals and departures due to a drone, we've been told. Something that's not within our control. We hope the crew keeps you updated. ^Ste