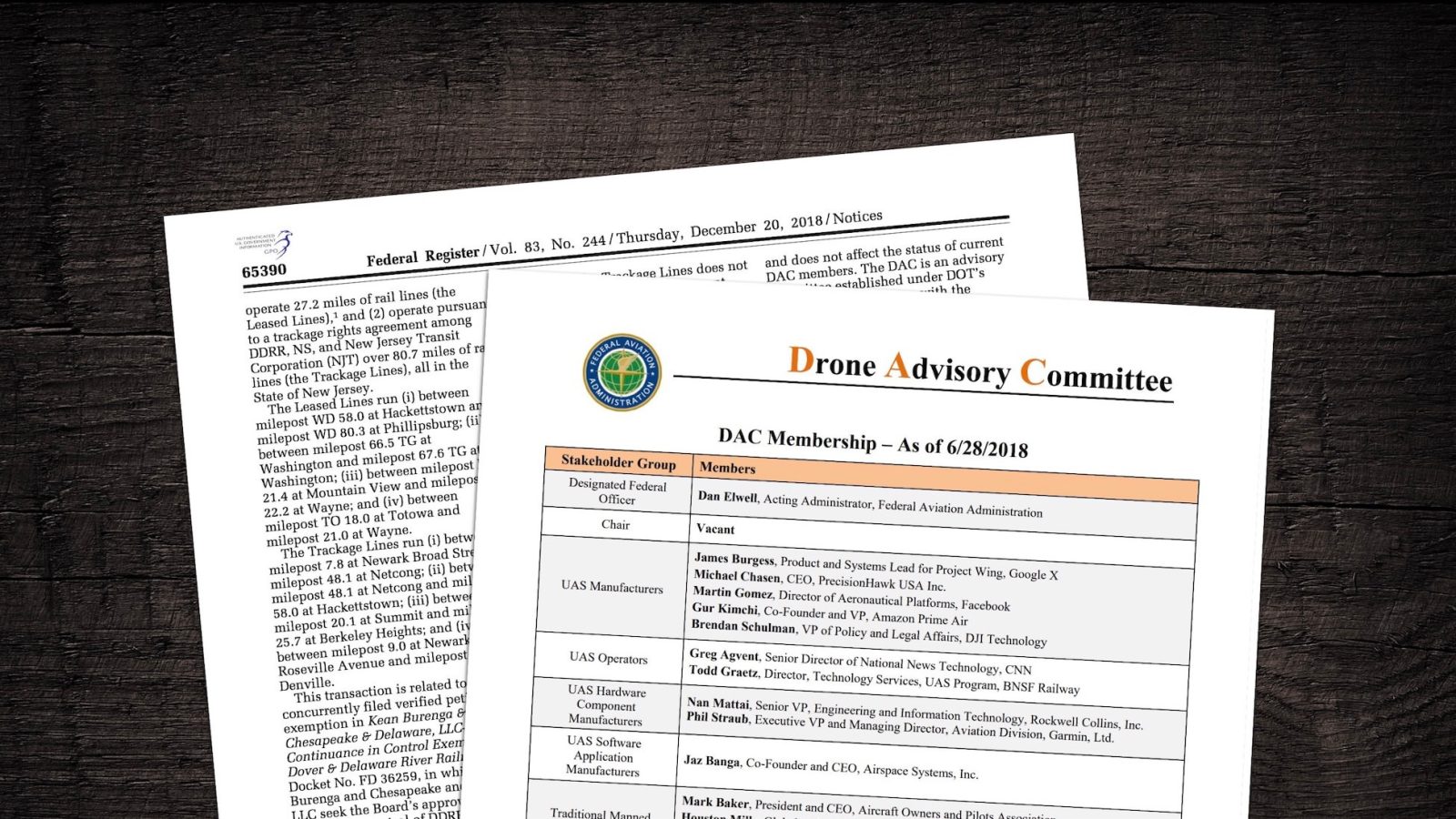 The Federal Aviation Administration (FAA) seeks new Drone Advisory Committee members. The FAA’s Drone Advisory Committee provides an open venue for the FAA and stakeholders to identify and recommend consensus-based resolutions for issues related to the integration of unmanned aircraft (UAS) into the National Airspace System. It seems that almost all of the current members represent commercial drone operators, UAS manufacturers, other drone industry specialists, local government and members from the world of manned aviation. Apart from two members, it is unclear who represents the large group of hobbyist drone pilots and smaller commercial drone operators.

I might be wrong here, but it seems to me that the only two people who would represent the interests of hobbyists drone pilots are Brendan Schulman from DJI and Rich Hanson, President, Academy of Model Aeronautics.

I’m curious to hear from our readers if you feel that regular hobbyist drone pilots, as well as smaller commercial drone operators, are properly represented in the FAA’s Drone Advisory Committee (DAC), that is advising the FAA on the efficiency and safety of integrating drones into the National Airspace System.

From the FAA’s notice itself:

“The objective of the DAC is to provide independent advice and recommendations to the FAA and to respond to specific taskings received directly from the FAA. The advice, recommendations, and taskings relate to improving the efficiency and safety of integrating Unmanned Aircraft Systems (UAS) into the National Airspace System.”

Please let us know in the poll below if you think that regular hobbyist drone pilots, as well as smaller commercial drone operators, are properly represented in the FAA’s Drone Advisory Committee (DAC). If you feel that this role should fall onto a specific person or organization, please leave your suggestion in the comments below.

The Federal Aviation Administration (FAA) seeks new drone advisory group members. The FAA has posted a notice (PDF) in the Federal Register soliciting qualified candidates to serve on the FAA’s Drone Advisory Committee (DAC). The committee provides an open venue for the FAA and stakeholders to identify and recommend consensus-based resolutions for issues related to the integration of unmanned aircraft (UAS) into the National Airspace System.

The notice explains the responsibilities associated with DAC membership and the desired qualifications for participants. It also details the materials candidates must submit, noting that failure to supply the required information may disqualify an otherwise excellent candidate from the review process. Selected members will serve for at least two years. The FAA must receive nomination packages no later than 6:00 a.m. EST on January 9, 2019.

Typically, DAC members are at the level of Chief Executive Officer, Chief Operating Officer or other high-ranking positions. Members come from a cross-section of stakeholders representing UAS interests, including industry, research and academia, retail, and technology. The FAA maintains a roster (PDF) of the current DAC membership. The DAC is limited to a maximum of 35 individuals.

The DAC, established as a Federal Advisory Committee, advises the FAA on the needs of new and expanding users of the National Airspace System, while identifying the strategic regulatory priorities and structure that simultaneously promote innovation, safety, efficiency and rapid UAS integration.