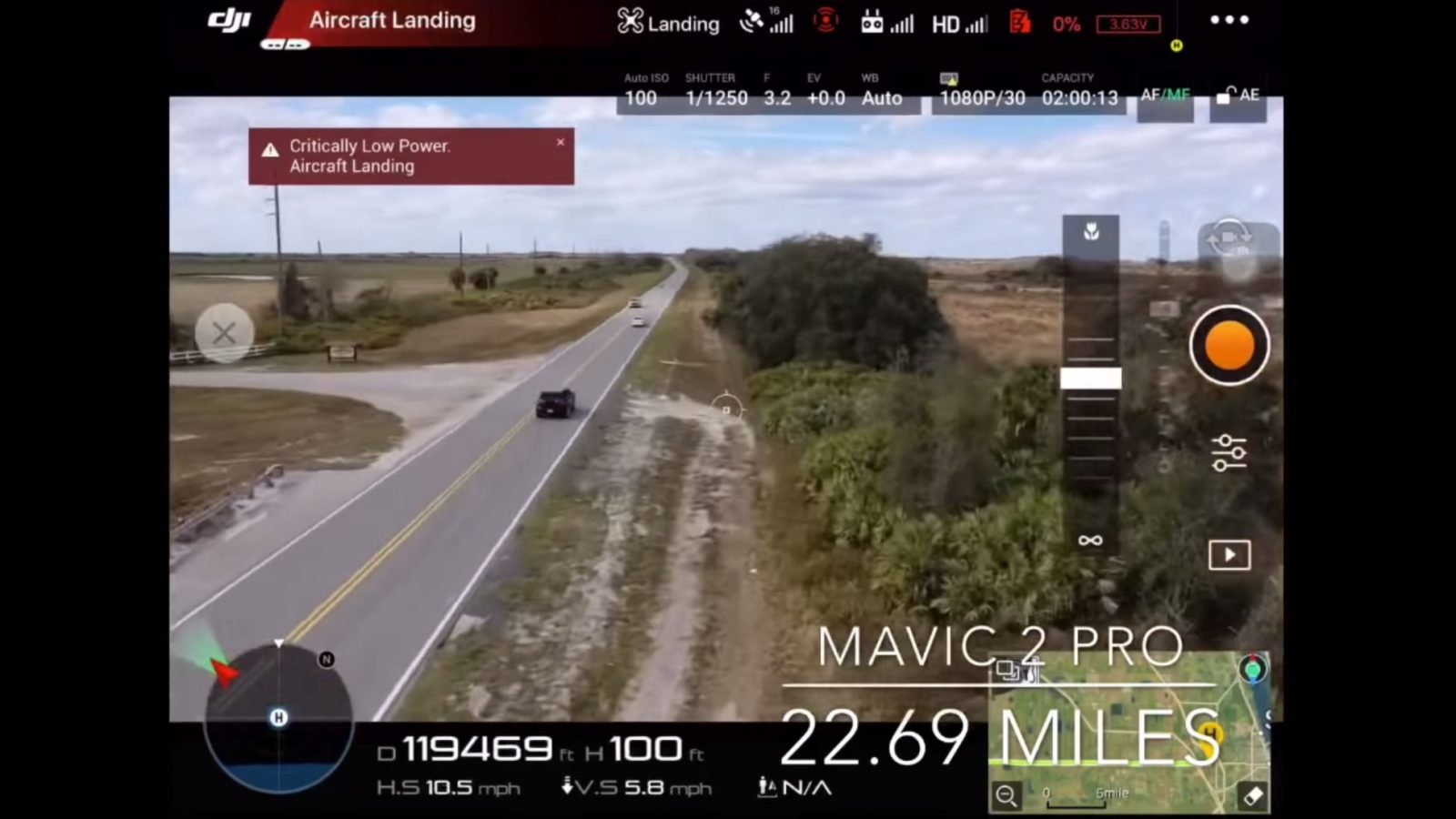 Last weekend, drone pilot Pablo Chacon posted this video to YouTube in which he claims to have made the longest drone flight ever. Pablo flew his unmodified DJI Mavic 2 Pro for more than 22 miles over a busy road in Florida. Is this, as he claims, indeed the longest, continuous flight ever with a standard DJI Mavic 2 Pro? Maybe, but one thing is for sure, it is not the safest flight ever. Not by a long shot.

In the video, you can see how Pablo flies the drone along and over a long stretch of busy road with homes and power lines in Florida. At times, the DJI Go 4 app warns of high winds, which explains why the drone doesn’t always fly in a straight line. You see many small corrections being made as the drone flies next to and over the road.

With 15% battery left, Pablo starts getting ‘low battery warning’ messages in his app. However, he keeps flying and when the battery reaches 11%, he is warned that the DJI Mavic 2 Pro will land itself in its current location. With the “Critically Low Power Aircraft Landing” warning message displayed in red in the app, Pablo is able to keep flying for a few more minutes though before landing his drone manually and parking his car at the same time. There was 0% battery left at that point.

On one of the forums, Pablo explains that:

Yeah it’s challenging to find a road long enough and not busy. I couldn’t find a anybody to drive while I flew. So I thought I’d try it by myself which was challenging to say the least not one of the safest ways to travel especially when I get into the landing mode.

One-way flight 119,602ft Winds were out of the SE at 15mph. Didn’t get off to a very good start had to calibrate the compass. I had to keep on pulling off to the side of the road & letting cars pass me Controller in one hand and steering wheel and the other. The last 10% was scariest I ended up landing in the road which wasn’t my intentions Lucky there wasn’t any cars coming. What adrenaline rush though it would be a lot less nerve-racking if you had a driver and you could concentrate on piloting. But it was a fun experiment for sure.

Impressive as it may be, we at DroneDJ do not support record attempts like these and here is why.

Especially in this case where the drone pilot is operating a moving vehicle at the same time as he is flying a DJI Mavic 2 Pro drone. It is simply too dangerous for the driver himself as well as other motorists on the road.

As far as the FAA rules go, they do not allow you to fly or operate a drone in “a careless or reckless manner“, which you could argue this is. Furthermore, you cannot “fly a small UAS over anyone NOT directly participating in the operation“, i.e. other motorists on the road and “no operations from a moving vehicle are allowed unless you are flying over a sparsely populated area“, which this doesn’t seem to be at all. Lastly, the FAA states that you cannot fly your drone over a moving vehicle, which again would include the other drivers on the road. Here’s that rule:

So, impressive as it may be to fly your DJI Mavic 2 Pro for more than 22 miles, it is not a smart thing to do while operating a vehicle on a busy road. I would urge other drone pilots not to try and break this ‘record’.

What do you think about record attempts like these? Let us know in the comments below.