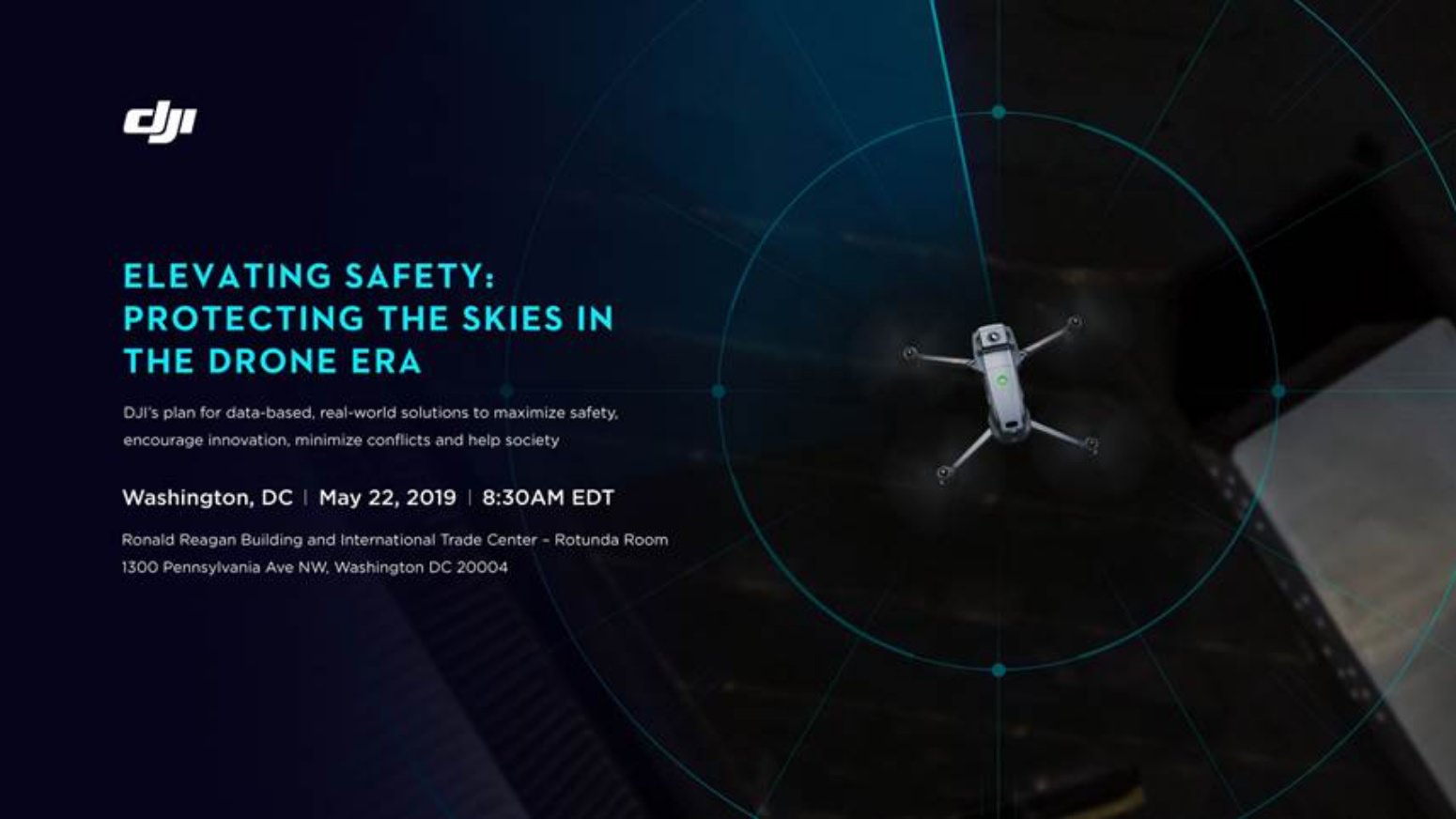 In the midst of a very turbulent week for DJI, the Chinese drone maker is holding an event in Washington, DC that focusses on improving the safety in the skies. In the Ronald Reagan Building, about seventy industry people gathered to listen to DJI’s latest developments and roadmap to safely integrate unmanned aircraft into the national airspace. DJI announced that it will make a huge step towards improving safety in the skies. Among other things, the company has committed to installing AirSense technology that receives ADS-B signals from nearby airplanes and helicopters into every DJI drone over 250 grams from January 2020 forward.

DJI, the world’s leader in civilian drones and aerial imaging technology, today strengthened its role as the drone industry’s safety leader at a Washington, D.C. event by committing to install airplane and helicopter detectors in new consumer drones, part of a 10-point plan to ensure the world’s skies remain safe in the drone era.

All new DJI drone models released after January 1, 2020 that weigh more than 250 grams will include AirSense technology, which receives ADS-B signals from nearby airplanes and helicopters and warns drone pilots if they appear to be on a collision course. This will be the largest single deployment of ADS-B collision awareness technology to date, and sets a new standard by putting professional-grade aviation safety technology in drones available to everyone.

AirSense can detect airplanes and helicopters from miles away, farther than a drone pilot can hear or see them, and displays their locations on the screen of the pilot’s remote controller. It has previously been available only on some professional-grade DJI drones, and this video explains how it will work in consumer drones as well.

“DJI leads the drone industry in developing safety technology and education, and we continue that tradition today by setting higher expectations for ourselves, our competitors and regulators,” said Brendan Schulman, DJI Vice President for Policy & Legal Affairs. “DJI was the first company to offer geofencing, automatic altitude limits, return-to-home technology and other safety features to the world’s growing community of personal and professional drone pilots. We believe our efforts have helped drones attain their enviable safety record, and we expect our new agenda will further improve safety even as more drones take to the skies.”

DJI’s AirSense commitment is the first of 10 points in “Elevating Safety,” its new plan for how DJI, other drone manufacturers, and government officials around the world can maintain drones’ admirable safety record. The 10 points are:

“Elevating Safety” is based on a comprehensive evaluation of available drone safety data, which concludes that most drone incident data collected by government regulators is misleading or useless, and shows that many media accounts of midair drone incidents are false or unproven.

“When the public, media and regulators focus on outrageous incidents that did not occur, it draws attention away from risks that are less sensational but more prevalent,” Schulman said. “There has never been a confirmed collision between a drone and an airplane, but drones have struck low-flying helicopters at least twice. This led us to focus on AirSense as the next opportunity to make drones safer, and to embrace the challenge of adding ADS-B receivers to consumer drone models that are already in development.”

Other aviation organizations agree that installing AirSense in mainstream consumer drones is an important step for protecting airplanes and helicopters and the people who fly in them. DJI’s ambitious schedule aligns with the FAA’s upcoming requirement for essentially all airplanes and helicopters to be equipped with ADS-B transmitters in controlled airspace, starting January 1, 2020.

“Expanding the availability of AirSense to DJI pilots is a meaningful step forward in safely integrating UAS and reducing conflicts with manned aircraft,” said Rune Duke, Senior Director of Airspace and Air Traffic at the Aircraft Owners and Pilots Association. “ADS-B In is used daily by thousands of pilots to increase their situational awareness and ensure safe operations. As the general aviation fleet further equips with ADS-B Out and other NextGen technology, enhancements like AirSense will allow all pilots to maximize their investment. All of aviation will benefit from the incorporation of this technology into DJI’s large fleet.”

“The aerial application industry has over 3,500 agricultural pilots that help farmers grow over 28 percent of our nation’s commercial cropland. They are flying 10 feet off the ground at speeds of over 100 miles per hour. As such, they must have great focus and precision with the important job they are performing,” said Andrew Moore, Executive Director at the National Agricultural Aviation Association. “Studies show that small drones are nearly impossible for our pilots to see, let alone track. An ideal drone system for manned ag pilots is one that has an ADS-B tracking system that can sense and avoid agricultural and other manned aircraft. DJI has taken the first step towards this by now equipping all of their drones with ADS-B tracking so their drone operators will be aware of other aircraft equipped with ADS-B tracking technology. They deserve real credit for this safety initiative. DJI’s safety policy is beyond what we have been urging the FAA and other drone manufacturers to require for multiple years. We appreciate DJI’s commitment to all airspace users’ well-being and look forward to working with them on equipping sense and avoid technology to their drones to complement the ADS-B system.”

“AAAE is pleased with DJI’s decision to equip nearly all of its drones with ADS-B In capabilities,” said Justin Barkowski, Staff Vice President, Regulatory Affairs at the American Association of Airport Executives. “Providing users with better situational awareness of nearby air traffic will only increase safety in the national airspace, particularly around airports where these measures are needed most.”

“Implementation of ADS-B will be another major accomplishment in the NextGen program,” said Edward Bolen, President and CEO at the National Business Aviation Association. “As with widespread use of GPS for precision navigation, ADS-B will enable precision surveillance that will enhance safety and efficiency for all operators in the airspace.”