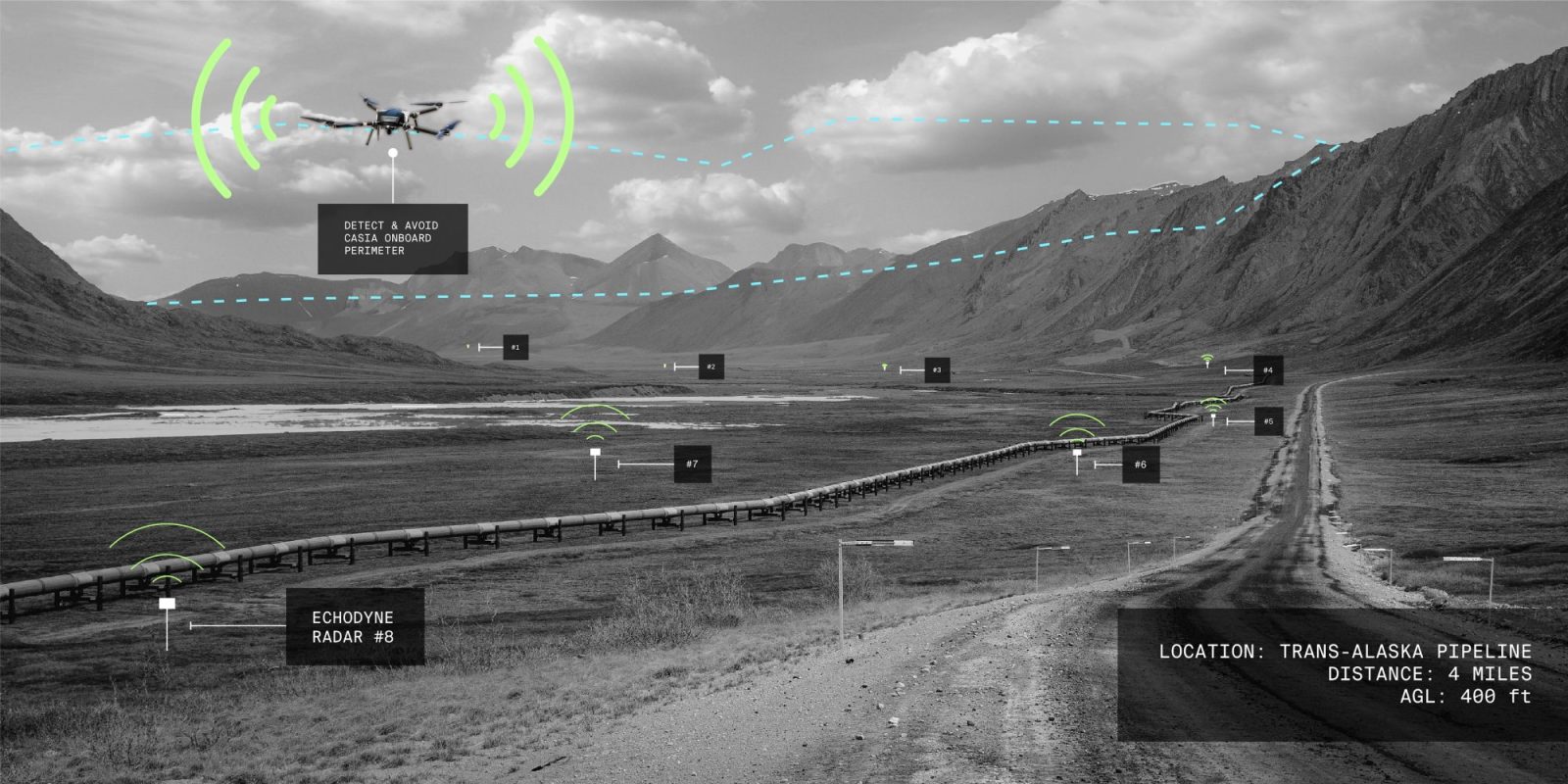 As part of the UAS Integration Pilot Program, the University of Alaska completed the first-ever ‘Beyond-Visual-Line-of-Sight’ drone flight without a visual observer to inspect a four-mile stretch of the Trans-Alaska Pipeline. The BVLOS drone flight was made possible with Iris Automation’s onboard detect and avoid system – called Casia.

After a safe and successful 3.87-mile mission to inspect the Trans-Alaska Pipeline infrastructure, a cohort of leading UAS organizations and technology partners earned permission to fly the same mission without a human visual observer. The flight was conducted on Wednesday, July 31, 2019, and received approval from the FAA based on Iris Automation’s proven computer vision collision avoidance technology, Skyfront’s long-range multirotor UAVs and Echodyne’s ground-based airspace management radars.

“This marks a huge advancement in the FAA UAS Integration Pilot Program (UAS IPP) and the drone industry,” said Iris Automation CEO and Co-founder Alexander Harmsen. “This is the first time detect and avoid technology is approved by an aviation authority as reliable enough to allow for BVLOS drone operations. We’re grateful for the FAA’s continued push to recognize and understand how these technologies will enable the successful and safe integration of UAS into our lives and businesses.”

Historically, all FAA-issued Part 107 BVLOS waivers have required some ground-based visual observer to mitigate the risk of non-cooperative aircraft entering the mission area — an expensive and unscalable restriction on the use of drones for commercial purposes. Yesterday, in partnership with the Alaska Center for Unmanned Aircraft Systems Integration (ACUASI) at the UAF Geophysical Institute and Alyeska Pipeline Service Company, Skyfront long-range hybrid electric drones leveraged Iris Automation’s onboard sense and avoid systems and eight Echodyne airspace management radars to safely pilot an unmanned flight over the Trans-Alaska Pipeline without any visual observer in multiple successful missions.

“The test mission designed by the team at the University of Alaska at Fairbanks is an excellent demonstration of the potential for commercial UAS,” said Echodyne Founder and CEO Eben Frankenberg. “With Iris Automation and Echodyne sensor technologies, routine commercial missions like linear inspection and medical deliveries to remote communities are both practical and safe.”

The Iris Automation Casia system is a turnkey solution that detects, tracks and classifies other aircraft and makes intelligent decisions about the threat they may pose to the vehicle, and triggers automated maneuvers to avoid collisions. The tool can work in coordination with ground-based sensors such as Echodyne’s innovative MESA radar technology, which has been used at a number of FAA UAS test sites.

The Casia technology has been extensively tested globally, with 7,000+ real-world test flights and mid-air collision scenarios – flying various manned aircraft against UAS – and over 40,000 encounters in simulation.

The U.S. Department of Transportation selected The University of Alaska Fairbanks as one of just 10 participants in the nationwide UASIPP. The program allows state, local and tribal governments to work with drone operators and manufacturers to speed up the safe entry of unmanned vehicles into the nation’s airspace beyond what is currently permissible under the FAA Part 107 regulations. The UAF team proposed several ways to pioneer safe drone use in Alaska — to deliver medical devices to remote areas, help searches and rescues, survey fish and wildlife, and monitor pipelines, roads and other infrastructure.

The @uafairbanks #Alaska Center for #UAS Integration has made an important advancement in #drone safety. Learn more about the #FAA’s #DronePilot program at https://t.co/ULT3d77Wez. #FlySafe https://t.co/hVj2kLCJ4Q