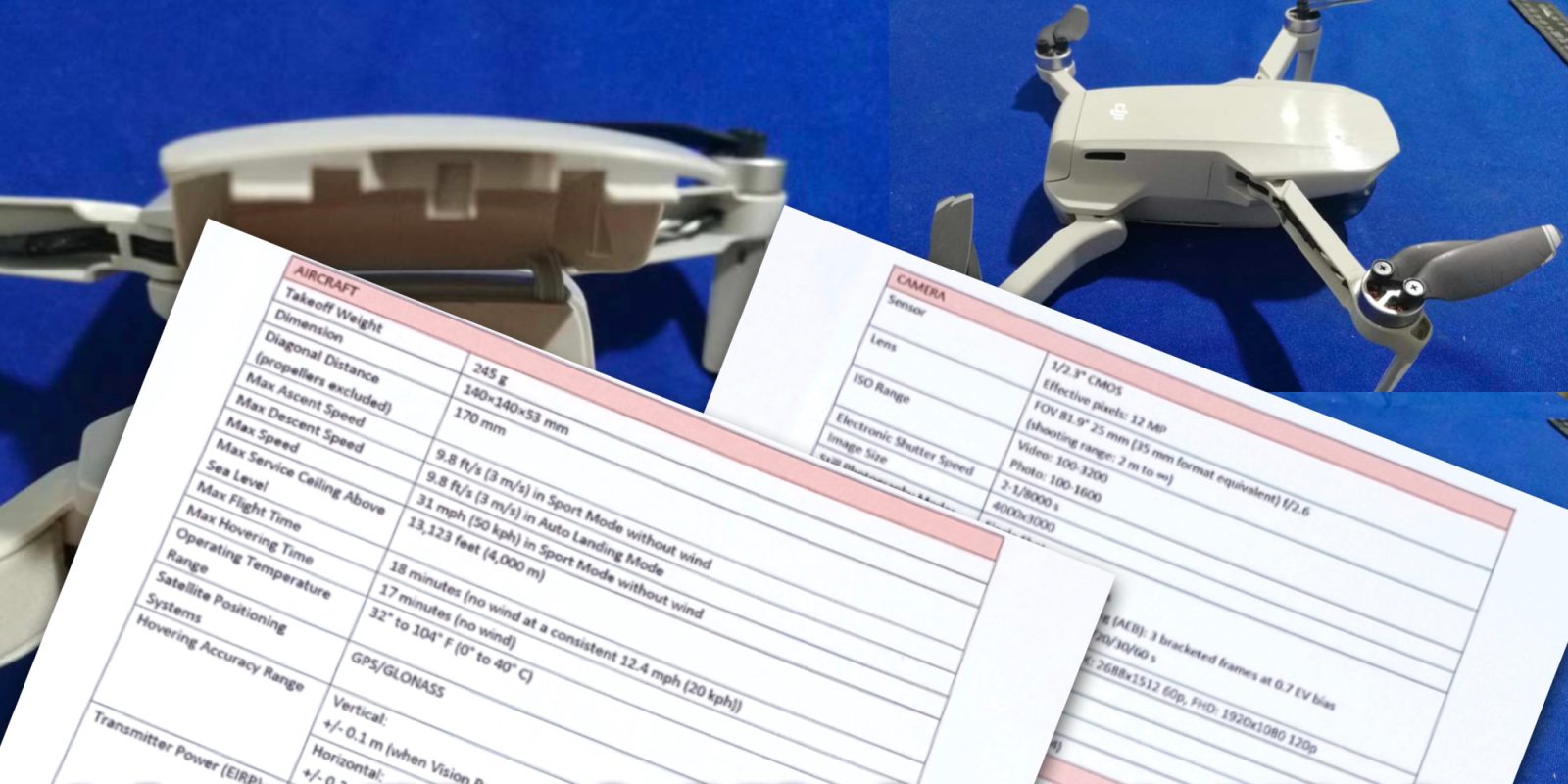 The night before DJI releases a new product, we learn that the DJI Mavic Mini specs might have leaked. The new DJI mini-drone may only weigh 245 grams (!) and may officially be part of the Spark Series. Will the Chinese drone maker call it the Spark 2 after all? Let’s take a look at the DJI Mavic Mini leaked specs.

Update 8/16/’19: We received confirmation from another source (unrelated to OsitaLV or Aero X) that the Mavic Mini specs mentioned below are correct. Our source told us when asked about the Mavic Mini that “All of those specs are accurate.” However, he also said that we are still at least two months away from an official announcement and that DJI has yet to decide whether this new drone will become an ‘Air’ or ‘Spark’replacement. Regardless of the Mavic Mini’s small footprint, the drone will almost certainly have No-Fly Zones incorporated through the app. Lastly, the Mavic Mini is not expected to have Lightbridge but rather a new and enhanced Wi-Fi connection. Currently, DJI is working on a multi-charger for the mini-drone. That’s all the info we have for now and no, this does not come from OsitaLV. DJI Mavic Mini specs leaked

It all started last night with a tweet from OsitaLV, who said that the leaked tech specs on Youtube suggest that the DJI Mavic Mini might be even smaller (and lighter!) than anticipated.

He said that based on the test report the dimensions of the DJI Mavic Mini would be 169.7mm(L) * 125.1mm(W) * 54.9mm(H), and that thus the diagonal measurement of the drone would be 210.8mm by calculation. I’m not sure how he can get such precise measurement from the photos we have seen but the math is correct.

A leaked spec sheet shows that the new DJI Mavic Mini might actually be even smaller, and possibly only weigh 245 grams. According to the DJI Mavic Mini spec sheets shown in this video from Aero X, the dimensions of the drone might only be 140x140x53mm and thus the diagonal distance ex propellers would only be 170mm. More importantly, according to these leaked spec sheets the DJI Mavic Mini (or Spark 2?) would only weigh 245 grams which means that here in the US, you wouldn’t even need to register the drone with the FAA. And such a lightweight drone will make even more people happy outside of the USA.

Now about the DJI Mavic Mini leaked specs. Do we know for sure that this information is 100% accurate? No, not entirely. As is always the case with leaked information and rumors it might be off here and there. This could also happen as a product undergoes some final tweaks and changes before going into production. However, the information in these sheets is very detailed and would make sense for a drone this size, such as the DJI Mavic Mini.

Some of the highlights of the DJI Mavic Mini

Here are the detailed DJI Mavic Mini specs from the leaked sheets.

If the leaked tech spec of Mavic Mini is true, it’s smaller than I calculated.
External dimensions on test report is 169.7mm(L)*125.1mm(W)*54.9mm(H)
Diagonal distance is 210.8mm by calculation.
But the “leaked tech spec” on YouTube said it was 170mm.

What do you think about the DJI Mavic Mini? A drone to get excited about? Let us know in the comments below.