You don’t want a Mavic. You want a Cinewhoop

The Cinewhoop is an awesome style of drone that can capture crisp HD footage that a machine like the DJI Mavic 2 just wouldn’t be capable of producing. They are small, stable, and safer than your typical FPV drone, and you can capture some pretty amazing cinematic footage. There are some small inexpensive options out there like the Eachine Cinecan, but those little drones can’t carry a GoPro or Osmo Action camera. The best ready-made option might be the iFlight Megabee, but it is $285. I figured I could do it for less and I was right. I’ll show you how to get it done for about $150.

If you aren’t familiar with a cinewhoop, that’s ok. It’s a relatively new style of drone and was created because filmmakers needed a smaller and safer option while working in tight quarters. Cine comes from cinematic. Whoop comes from Tiny Whoop, a popular small drone that has ducts protecting the propellers. Unlike a Mavic or a Phantom, it isn’t typically flown in line of sight but rather through FPV goggles. This allows the pilot more precision and control while filming. It also takes a lot more practice to do well. Unfortunately, there aren’t a lot of premade Cinewhoops out there that can carry a GoPro. Your only real option right now that isn’t a DIY option is the iFlight Megabee, and it will set you back $285. Depending on what components you have laying around, this build should come in somewhere between $120-$180.

First, let me say that I absolutely love this thing. It is my first all-from-scratch build and it flies awesomely. It doesn’t have the raw power of a 5-inch racer or freestyle drone, but that isn’t the point. I wanted to build something that could carry my GoPro and had ducts so I could fly around obstacles and things that might be sensitive to potential crashes. Let me break down the build and the components I used. I’ll give you the basic and the premium options, and you can decide for yourself which you think you want to put into your build. When I put this together, there wasn’t a kit available. But as it turns out, Banggood put together a great starting package using the same components I recommend. You can get the frame, flight controller, ESC, motors, and props for just $116. You’ll still need some other things like a receiver, but it is a great start.

The frame I used was the $29 Donut. It is a 3-inch ducted design and does the job. The later production models have higher quality TPU printed parts. There aren’t many other options even near this price range. There is the Shen Drones squirt, but it is pricy at $95 and is often out of stock. Or you could opt for the already built iFlight Megabee for $285. I do like the Donut, and it has served me well so far. My biggest gripe is the screws and how they mount to the ducts. I may look into printing my own with small bolts and nuts. I actually have two Donut frames, and I’m happy to say that the ducts on the newer models seem to be better.

The ducts all start out orange. I painted mine silver. That certainly is a preference thing. I wouldn’t recommend painting the camera mount. I found that the VHB tape I used had a tendency to not stick to the painted surface very well, and it is important to make sure the camera is secure. 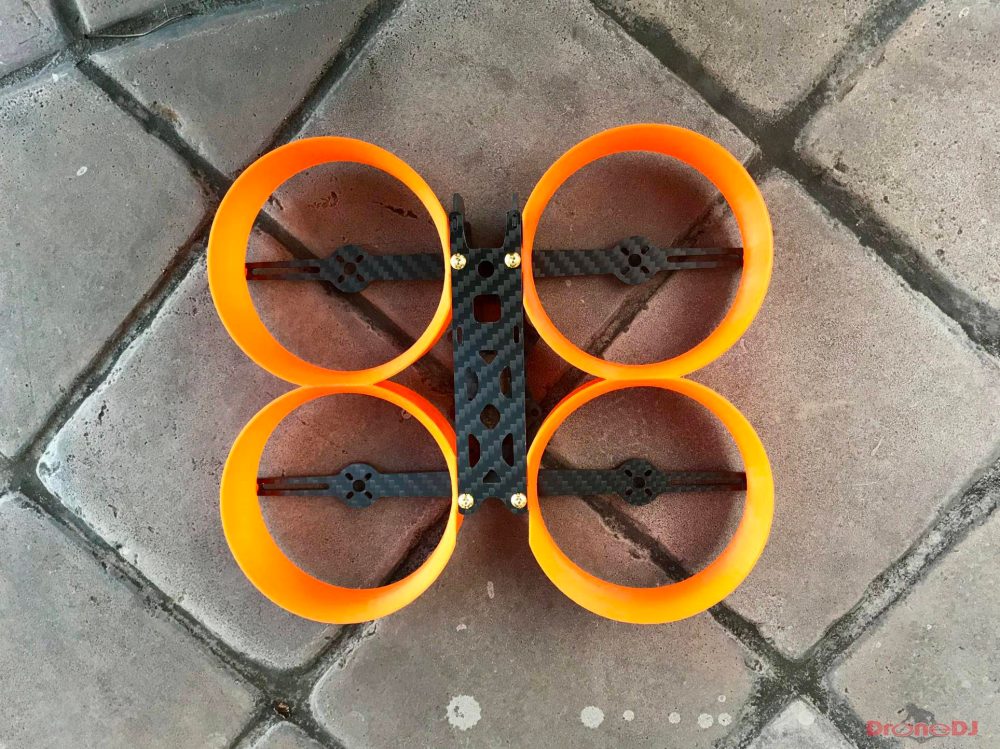 The heart of the Whoop

There are plenty of flight controllers out there to use, and I highly recommend picking up an all-in-one stack. I used the Mamba F7 stack. It is an absolute overkill, but Banggood sent me an extra one to test. I love that it has Speedybee Bluetooth so I can connect to Betaflight on my phone, rather than having to plug into a USB with my computer. That is particularly important as the USB port is blocked by the ducts, and they have to be removed to get to it. The Mamba F7 is a little bit larger than most boards, and it is a tad large for the build. Everything fits fine, but it is a tight squeeze. Getting the ducts on and off is a bit of a pain. I would actually recommend the $35 Mamba F4 stack. It will do the job, is smaller than the F7, and will save you about $42. It is one of the included parts in the Banggood Cinewhoop Donut kit.

The motors I chose were the GEPRC 1408 3750KV motors. They are solid motors and get the job done. Personally I wish I would have gone with the slightly lower 3500 KV motors for a bit more control at the lower end of the throttle. At $13 each, they won’t break the bank and offer pretty solid value. These 3500 KV motors along with the HQ props are also part of the new Cinewhoop kit. If you want something slightly better, I’d go with the iFlight Xing 1408 3600 KV motors. They will be a little bit more at $16 each. Both are solid options. I use the HQ 3-inch props and they do great inside these ducts. 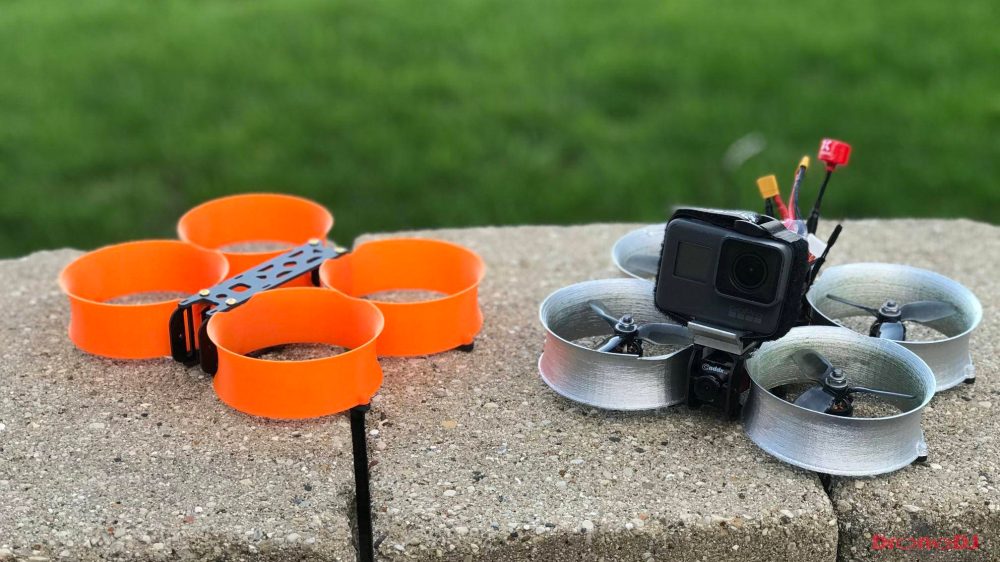 Choosing your video transmitter is largely dependent on where and how you’ll be flying. I went with the $16 economical Aomway TX006. It is switchable from 0-600 mw and does a nice job for me. If you want the best I’d recommend the $38 Rush Tank. For those of you that are Crossfire users, you may want to go this route. I used a Foxeer Lolipop antenna, and they cost $19 and are typically sold in pairs. If you only want one, then I’d recommend the RealACC Stubby antenna. You can get a pair of them for only $9.

I used the Caddx Turbo EOS2 as my FPV camera. It produces a fantastic picture and is only $16. I toyed with the idea of using the Caddx Tarsier 4K camera. The Tarsier is an innovative product that combines two cameras. One super high-quality FPV camera with a 4K camera is capable of capturing onboard footage. If you choose to go with the Caddx Tarsier, you could forgo the GoPro if you wanted. In the end, I didn’t opt for the Tarsier as it is $70, and I really wanted to use my GoPro. Plus the ducts make getting the SD card in and out a bit of a challenge. It can be mounted on the bottom of the frame if you want, but I opted to just go with the Caddx.

The double lens of the Tarsier 4K FPV camera is unique.

If you opt for the Tarsier then you’ve got this covered. The obvious answer is you want the new GoPro 8. It shoots incredible stabilized footage but it, of course, isn’t cheap. At $399 it will set you back a bit. You can actually get a pretty solid action camera on Amazon for less than $100. I’m also a big fan of the session-style Foxeer Box 2 camera. It is smaller and will only cost you about $100.

Really, this tool is up to you. There are a lot of really good options. The DJI Osmo Action has awesome stabilization. The Sony RXO ii has a 1-inch sensor. I’ve been flying with my “old” GoPro Hero 5 and it looks great. Go with whatever camera you feel most comfortable flying… and crashing.

The receiver you choose will largely be dependent on what remote controller you have. Personally I’m a FrSky guy. I fly most of my drones with my old Taranis X-Lite.  If you have one of these or another Taranis, the XM+ receiver is a good $18 option. I’ve also been using the new R9M Lite module ($65) and the R9 MM ($29) receiver with this setup, and you’ll get Crossfire-like range at a much lower cost. The receiver is a personal preference thing. You can go with whichever one best suits your needs and matches your controller.

You’ll want to pick up batteries. You will have to decide if you go with an XT30 or an XT60 connector. I picked up some XF Power 850 mah 4S batteries. It was only $39 for four of them. GNB makes a higher-quality battery, but you’ll pay about $20 for each one. The XF Power definitely works, but I kind of wish I would have gone with the GNBs. Don’t forget to grab a battery strap to keep it in place.

If you don’t have solder and a soldering iron, you’ll definitely need both. I love my TS100. I can use it in the field and power it from a lipo battery. But it is a little pricey at $55. You can pick up a standard one for about $15. If you haven’t soldered before, I’d highly recommend you get in some practice before you try on one of these boards. These boards are small and definitely aren’t easy for first-timers. 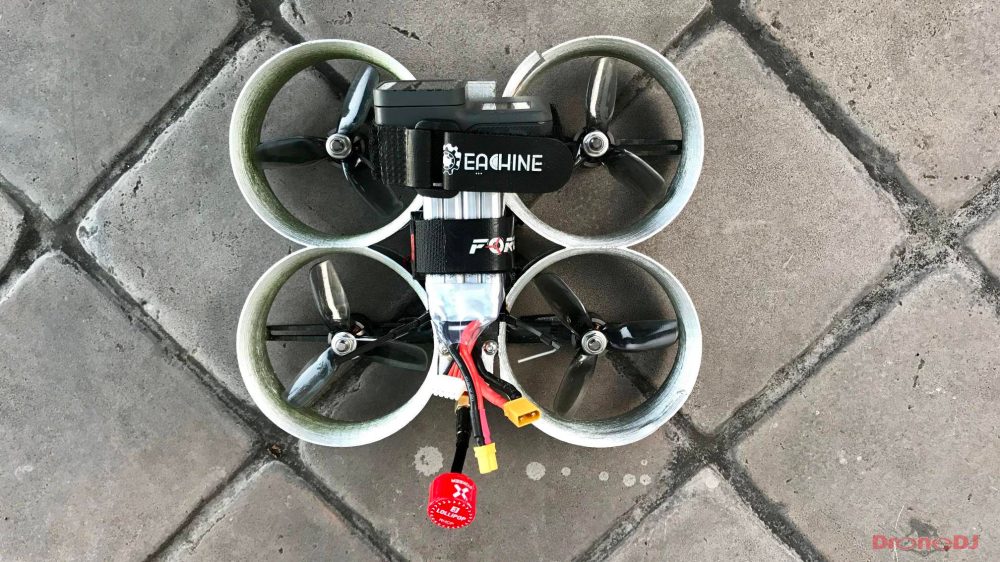 Here are the parts I used or links to suggestions to upgrade. The Donut Kit is a pretty solid place to start.

Should you build a Cinewhoop?

Flying a Cinewhoop is a lot of fun. It’s a tool that any aerial photographer needs to have in their tool bag. I love my Mavic 2 Zoom but it can’t do it all. When I need to fly in tight places or near obstacles, the Cinewhoop is the drone for the job. But the question is, should you get one? That depends entirely on you. Do you want crisp indoor cinematic footage? Do you need to fly in tight spaces? Can you pilot FPV or are you willing to learn? Are you willing to put one together? Personally I think it is a fantastic tool, but it isn’t for everyone.