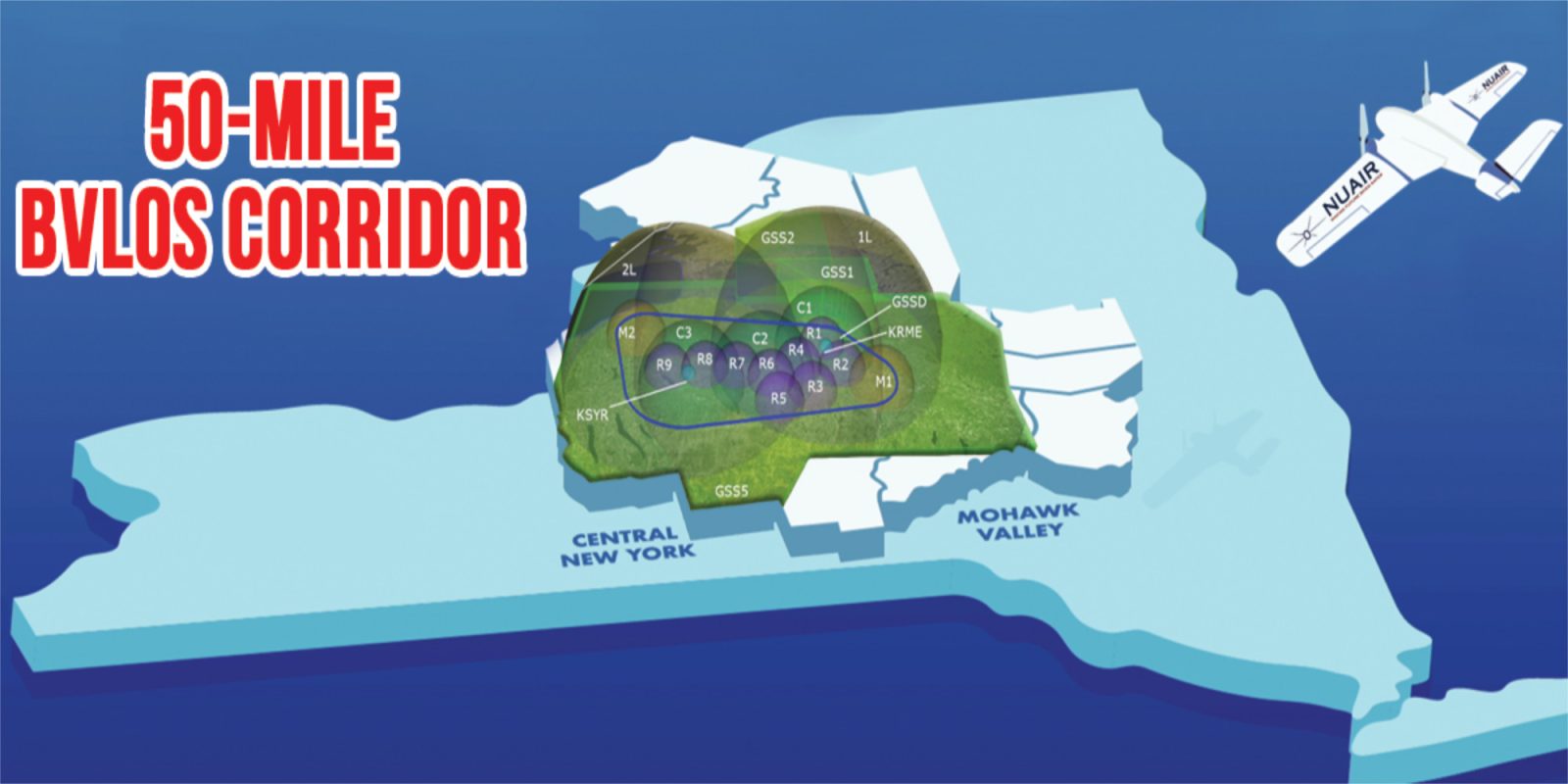 Governor Andrew M. Cuomo announced that the New York Unmanned Aircraft System Test Site at Griffiss International Airport in Rome has received approval from the Federal Aviation Administration to fly unmanned aircraft beyond visual line of sight within first segment of New York’s 50-Mile Unmanned Aircraft System Corridor being built by Oneida County, NUAIR and New York State. This is the first “true” BVLOS authority granted to the FAA-designated test site, which allows unmanned aircraft testing without the need for ground-based observers. This announcement builds on a $30 million investment announced by Governor Cuomo in November of 2016 to advance the growing Unmanned Aircraft System industry as part of the Governor’s CNY Rising initiative.

“The drone corridor has transformed Central New York and the Mohawk Valley into a global leader of this next-generation technology, while diversifying New York’s economy,” Governor Cuomo said. “This Federal designation is an incredible milestone for New York State and will ensure that Central New York and the Mohawk Valley regions remain the global hub for Unmanned Aircraft System advancement and integration for generations to come.”

Current FAA drone regulations require operators to keep their drones in line of sight unless they have approval from the FAA. To date, Northeast UAS Airspace Integration Research and the New York UAS Test Site have conducted over 2,500 test flights but required multiple people in the field to have a visual line of sight for the aircraft. By receiving “True” BVLOS flight approval, the UAS Test Site will no longer require those observers in the field as NUAIR and the Test Site have proved to the FAA that the proper safety measures and technologies are in place to fly unmanned aircraft beyond line of sight safely.

NUAIR CEO Michael Hertzendorf said, “The ability to fly with this new authority will help develop and advance many aspects of an air traffic management system for unmanned aircraft. In order for us to fully employ, operate and unlock the true potential of unmanned systems and achieve a reality where drones are conducting routine missions such as inspecting power lines, protecting critical infrastructure, or delivering medical supplies, we need to ensure the proper safety elements are in place. This authority greatly enhances our ability to test towards that end state.”

The eight-by-four-mile section of airspace that was approved for these flights is between Griffiss International Airport and the New York State Department of Homeland Security and Emergency Services State Preparedness Training Center in Oriskany. The strategic selection of this airspace within New York’s 50-mile UAS corridor opens the door for future advancements of the corridor and the continued cooperation between NUAIR, the Test Site and New York State agencies.

Tony Basile, chief operations officer at NUAIR, said, “This is a huge milestone for NUAIR, the Test Site and the continued development of New York’s 50-mile UAS corridor between Rome and Syracuse. With a crawl, walk, run mentality of UAS advancement, having the ability to fly beyond visual line of sight within a limited area moves us into the “walk” category, which will lead us to “running” in a fully operational BVLOS 50-mile UAS corridor in the near future.”

The designation process for the beyond visual line of sight testing took about 14 months. NUAIR and the New York UAS Test Site were able to receive this true BVLOS approval by showcasing the vast amount of high-tech equipment and safety technologies that have been established along with the flight data from over 2,500 UAS test flights they’ve conducted since operations began in 2015.

New York State Homeland Security and Emergency Services Commissioner Patrick A. Murphy said, “UAS have quickly become important tools for first responders in search, rescue, fire investigation, and emergency operations and the State’s Preparedness Training Center plays a critical role by ensuring those needing to utilize this technology are properly trained. With this new authority from the FAA, New York State will remain on the cutting edge as it relates to UAS technology.”

Robert Simpson, president of CenterState CEO, said, “This approval by the FAA enables this test corridor to take an important step forward in its testing capabilities, which only further establishes New York and the Mohawk Valley as a national leader in UAS development. This region, thanks to unparalleled investments by New York State, set forth an audacious goal to be a global leader for UTM technologies and we are now a major step closer to realizing that vision. We know the investments being made by the state are driving results and creating opportunities to advance the research and development of UAS technologies, which in turn is attracting new permanent businesses to the region.”

Oneida County Executive Anthony Picente said, “As of today in Oneida County, you can fly unmanned aircraft as far as the eye can see – and then a little more. The FAA approval of an 8-mile flight corridor between the New York Test Site at Griffiss International Airport and the State Preparedness Training Center in Oriskany is a critical development which we believe will attract more research, testing, investment and jobs to the region.”

Onondaga County Executive Ryan McMahon said, “The continued momentum in the designated drone corridor in Central New York is great news. Governor Cuomo’s commitment to the burgeoning Unmanned Aerial Systems industry in our region has been transformative. As an integral part of the CNY Rising economic development plan, our region is truly establishing itself as the global hub for this innovative industry and growing the regional economy.”

Central New York Regional Economic Development Council Co-Chairs Randy Wolken, President & CEO of the Manufacturers Association of Central New York (MACNY) and Deborah Stanley, President of the State University of New York at Oswego said, “This new FAA designation is so important Growing the UAS industry is central to the regionally designed CNY Rising plan. Through our continued support for this first of its kind drone corridor we are ensuring that New York remains at the forefront of this industry, creating new opportunities and jobs for residents in the region for decades to come.”