Draganfly is developing a ‘pandemic drone’ to help fight COVID-19

Canadian drone maker Draganfly is collaborating with the Australian Department of Defense and the University of South Australia to tackle the coronavirus. Its new “pandemic” drone will be part of a camera system to spot signs of illness, such as coughing and elevated temperatures.

The goal, say organizers, is not to identify sick individuals. Instead, it will collect real-time statistical data about the possible spread of the disease. Drones are just part of this system, which will leverage other cameras around the world, such as CCTV cameras. They will all feed images and video into software developed by healthcare and AI company Vital Intelligence, Inc.

A suite of sensors

Called the Vital Intelligence Project, the effort will not be limited to Australia. Instead, it will be part of a potential global network to track the pandemic. Draganfly’s pandemic drones will be equipped with a variety of sensors to collect data. They include a 4K visible-light camera, thermal and hyperspectral cameras, as well as microphones.

The devices will often react in concert to assess the health of the public.

For instance, Draganfly CEO Cameron Chell explained the process of detecting a fever to website Inside Unmanned Systems.

Just because you have a thermal camera doesn’t mean you can detect a fever. It’s about being able to take all those factors, such as respiratory rates, heart rate, blood pressure and skin tone, to determine if it’s actually a fever or not.

To detect heart rate, for instance, AI will analyze both movements as well as color changes around the nose and under the eyes. A directional microphone that cancels out the noise of the pandemic drone’s propellers might pick up the sound of a cough of sneeze. It will act in concert with image analysis that detects the way people move when they cough or sneeze.

The project has a modest budget of $1.5 million per year. Its initial focus will be on “hot zones” such as New York City. Within those zones, it will focus on critical locations such as hospitals to gauge the infection rate. 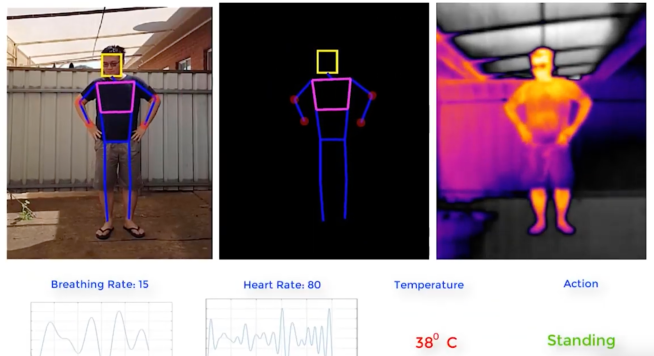 Draganfly says that its pandemic drone could be ready within the next 60 to 120 days. So this is not a tool for the surge of patients, which has come or is about to come in many hot zones already.

Rather, it provides for continued monitoring and an early-warning system for the disease. Because even when the worst of COVID-19 is behind us, it will remain an ongoing threat. Flare-ups in the population could continue to happen for years. Constant monitoring and fast reaction will be critical to avoiding crises.