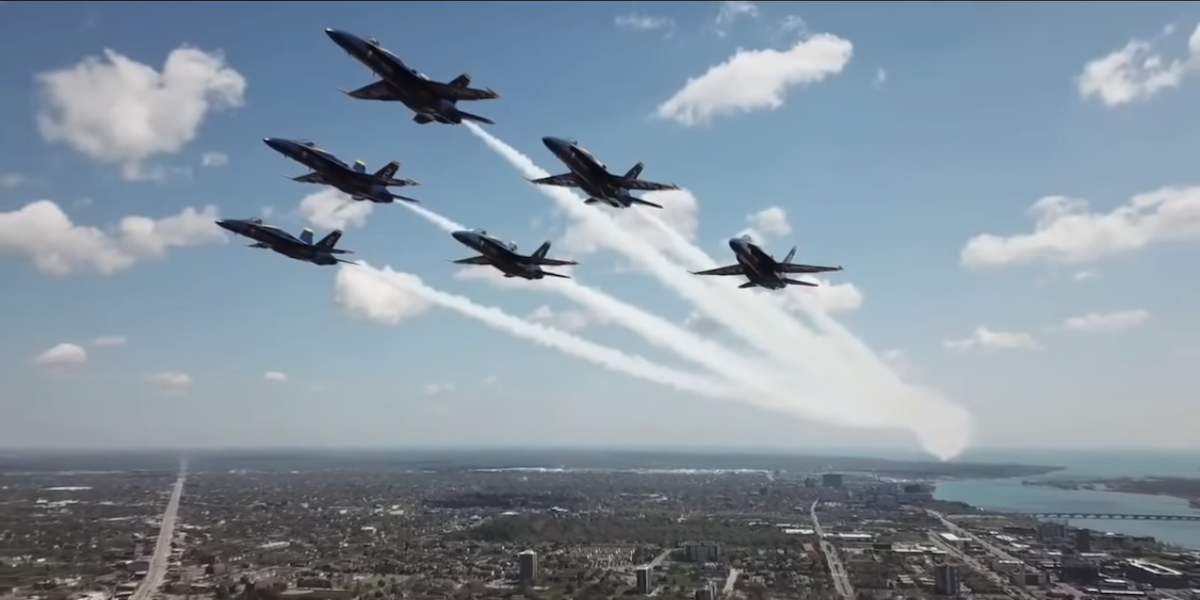 The video, set to the Top Gun theme song Danger Zone, provides a stunning view of the Navy’s Blue Angels flying in formation. How did the drone pilot get such great footage? Probably not legally.

The video surfaced online the day after an “America Strong” air show by the Blue Angels in Detroit, Michigan on Tuesday, May 12. It’s definitely from a drone, as you can occasionally see propellers at the edge of the frame. As few drone cameras have zoom lenses, the craft was likely quite close to the fighter jets. Just over a minute long, the video captures four dramatic flyovers by the planes. In the last one, the they are flying directly overhead, filling half the frame. The Blue Angels look as if they could be within 100 feet of the drone.

That’s certainly not a legal way to fly. One of the primary rules for all drone operators in the US is that they not interfere with manned aircraft. It’s also forbidden to fly in a reckless or irresponsible manner, which shadowing fighter jets would probably fall under. And just for good measure, it’s prohibited to fly over people (without a Part 107 waiver), and this footage was shot over downtown Detroit.

Who’s the daring pilot? The video features the handle @GIOLUCIA in the opening title. That matches an Instagram account for a Giovanni Lucia that has since been taken down. The video that’s still available is a YouTube posting under an account named Moss Photography. In the notes, the poster says that they downloaded the video from the Facebook page of a “Mr. Lucia” that has since been taken down.

“One of the most irresponsible, ignorant, reckless, moronic, outright dangerous things I’ve EVER seen with a drone,” writes Moss Photography in the notes.

The video is amazing, though.