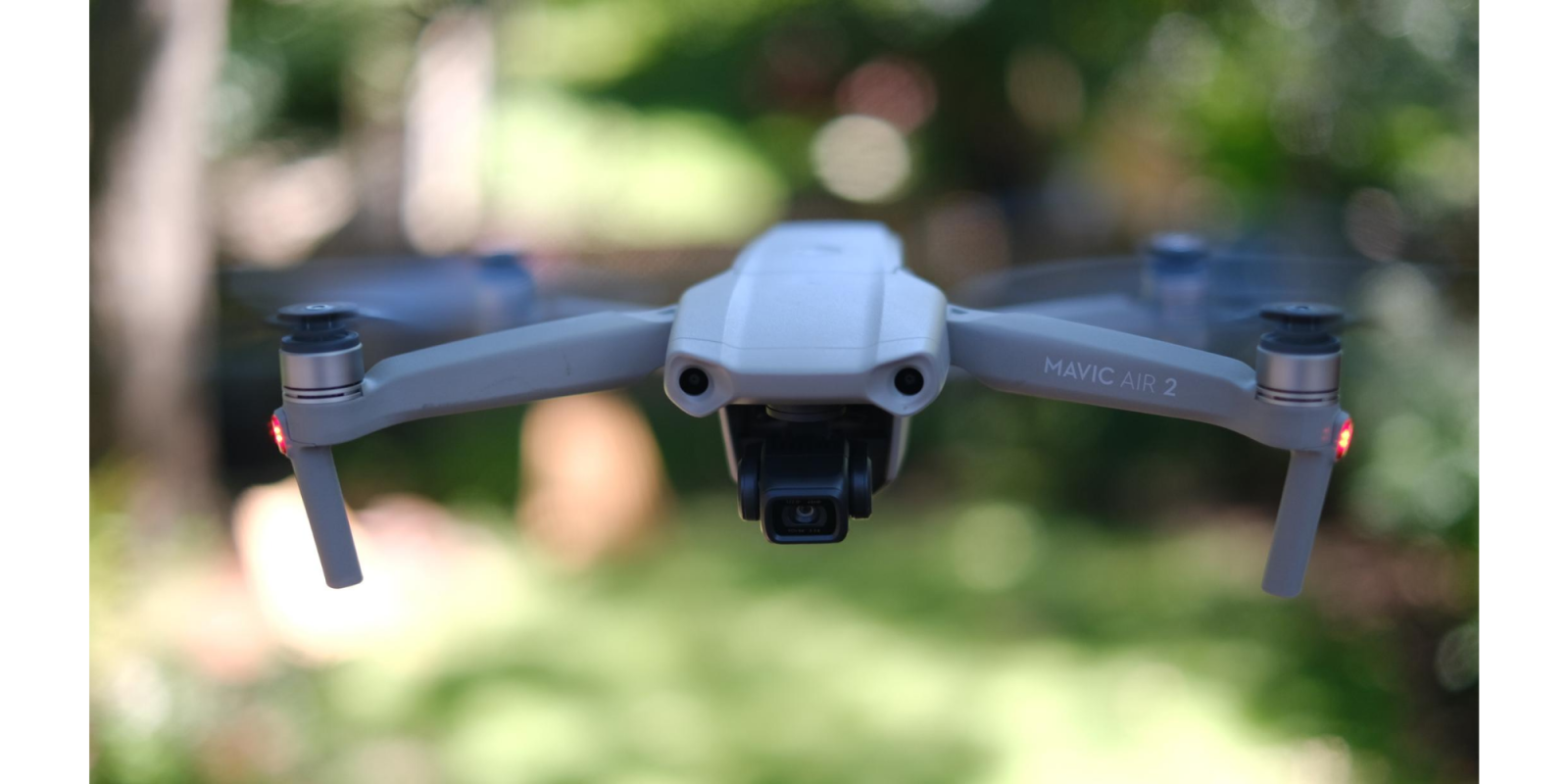 Yes, I realize I’m a little behind the curve to be writing about the Mavic Air 2. But, truth is, I received a loaner just recently, not long after joining DroneDJ. I’d done some indoor flying, but I finally got a chance to get out into the great outdoors. So this will be a relatively brief, “first impressions'” kind of review.

I’d seen the Mavic Air 2, of course, and read about it. But this was my first opportunity to get out of town and away from controlled airspace for a good flight. I joined a friend who flies DLG, or Discus-Launched Glider, at a sod farm. The location was great — a huge open field — and the weather was perfect. Warm, with a very light breeze. With a single battery, I wasn’t sure how much flying I’d be able to get in but was eager to finally get the Mavic Air 2 up in the air. And so, after calibrating the compass and doing a quick pre-flight check, it was take-off time.

Though there wasn’t much wind to challenge it, the Mavic Air 2 was incredibly stable after getting in the air. Take your thumbs off the sticks and — as you’d expect — the drone hovers in place. It did so with authority, hanging in space as if it had been nailed there. As someone who owns an original Mavic Pro, as well as a Phantom Four Professional and an Inspire 2, this didn’t really come as a surprise. But it was reassuring, as an initial impression.

When a stronger breeze did kick up — and this was especially true during a later flight in my backyard — the Mavic Air 2 could get twitchy: Its lower mass (570 grams) could be thrown around a little more easily than, say, the Mavic Pro. However, the gimbal was so on top of its game that you couldn’t detect anything on the monitor. The end result was smooooooth.

For this first flight, I had set the Mavic Air 2 in Sport Mode, as I wanted to check out the speed and handling. With no obstacles to be concerned with, I ramped up the speed and started flying a large figure-eight pattern. It handled this with ease, so I started tightening up the radius. The Mavic Air 2 was still highly responsive — reacting quickly and with a certain precision I honestly wasn’t expecting.

I handed the controller over to friend Eitan Rotbart, an aerospace engineer who has worked with Elbit Systems in Israel. Eitan also owns a Mavic Pro and is a consummate drone (and glider) pilot. He flew it for a few minutes, including throwing it some strong inputs and abrupt changeups. I was watching his face; he had a huge smile.

“This thing’s amazing,” he said.

And it was. Mostly — and before really exploring any other features — I was impressed with the power and handling. Of course, it’s not like an FPV racer. But for the standard drone world, this responds kind of like a little sports car. The thing looks like it’s on rails in the air and almost feels like it.

It was also really quiet. I knew from looking at the propellers earlier and from the flight in the house that these props had been heavily engineered to minimize noise. They’re super-thin, and there’s a slight upward camber at the tips of those props. The prop design has clearly been engineered with weight and noise in mind, and really — with the exception of the Mavic Mini — it’s hard to imagine a drone that’s quieter. This thing just purrs along, without the annoying buzz that was the hallmark of, say, the early Phantom series.

A reduced noise signature is such a worthy engineering goal. Noisy drones are annoying — especially if you’re not the one piloting them. When Alphabet’s WING started a pilot delivery project in Australia, many people were really turned off by the noise. In fact, a neighborhood group quickly formed to lobby against further expansion of deliveries. (You can watch an excellent Wall Street Journal video about this experiment here.)

The Mavic Air 2, thankfully, was really inoffensive sounding. I flew it in my backyard later with the confidence that my neighbors would not be disturbed by the noise. They weren’t. And — as someone who flies the original Mavic Pro outfitted with low-noise propellers — I can tell you this is quieter than the Mavic Pro with those quieter props. Not just quieter but not irritating in the way that the standard drone buzz can be.

There’s also just the sheer design chops that have all been folded into the Mavic Air 2. I mean, consider the antenna for starters — so cleverly placed inside the top part of the clamp for the phone. Unlike the Mavic Pro controller, no more fold-out props. What a beautiful and functional integration — and one that makes absolute sense when you’re trying to minimize size.

Form factor and ergonomics on the Mavic Air 2 controller are also amazing. The texture feels great in the hand, and it’s clear that a longer flight with the Mavic Air 2 would be more comfortable for the pilot holding this controller as opposed to the original Mavic Pro controller.

Obviously, I wanted to take a few images from above. With a 48 MP camera, I was expecting some really crisp shots. And they were:

But when I really zoomed in, there were also some artifacts in the image that looked more like an algorithm was trying to save space. What I had hoped would be crisp details were not. It had the distinct look that a lot of processing was going on, and I wasn’t super keen on that — despite the fact that color accuracy seemed pretty good and the camera handled highlights and dynamic range better than expected.

Wait, what was your setting?

Of course, once back at home, I realized that I had been using the single-shot setting — which takes images at a default 12 MP, rather than the 48 MP option. Here, I’ve taken a couple of shots in the back yard over a spot that tests dynamic range and detail. The results? Well, yeah — shooting in the 48 MP mode clearly provides way better resolution once you start zooming in.

Once I was pretty comfortable with inputs and response, I thought it would be worth trying some of the Intelligent features. I wanted to see how this drone fared with tracking compared with the original Mavic Pro, which had always been kinda hit and miss in this department. I got the Mavic Air 2 up a little higher, framed myself properly, and tried to initiate QuickShot/Circle — where the Mavic Air 2 was supposed to simply orbit around me.

I was all ready to go:

But I could not get the feature to engage. And while I didn’t manage to screenshot my phone out in the field, I received the same error message when back home:

See that warning? “Mobile device CPU fully loaded. Related performance will be affected.” Although DJI’s specs indicate that an iPhone 6s is compatible with DJI Fly (and, indeed, it had been working fine), I just couldn’t seem to get it to track me without this error message popping up. It wouldn’t surprise me if this iPhone is getting just a little long in the tooth, though a quick online search didn’t seem to reveal significant complaints on this front.

Flying DJI’s Mavic Air 2 is awesome for another reason — and one that’s worth emphasizing: The TIME you get to spend with this drone in the air. With a 34-minute maximum flight time, a person could do some serious work (or play) on a single battery charge. Trust me, that extra time is sooooo welcome when you’re down on the ground flying. Factor in the myriad of other features, and it’s a pretty amazing piece of technology.

There are still many things I want to test at greater length with the Mavic Air 2. More time with the video (which did look great in my tests), as well as the intelligent flight modes. I’ll also want to really dial in the gimbal for that cinematic, smooth effect we all love.

There are others out there who think the Mavic Air 2 is about the best drone you can get for the money. And I totally agree with them. The amount of technology that is packed into this little robot is insane. Combine that with the flight time and form factor, and I’ll be looking to sell my original Mavic Pro and purchase one of these.

If you’ve been on the fence about this drone, please take my word on this: If you want to buy an amazing drone for less than $1,000, make it this one. At $799 you simply can’t go wrong. C’mon and pull the pin. You can thank me later.

(DJI, if you happen to be reading this, please don’t ask for our loaner back anytime soon. I have quite a lot more I’d like to try with this!)