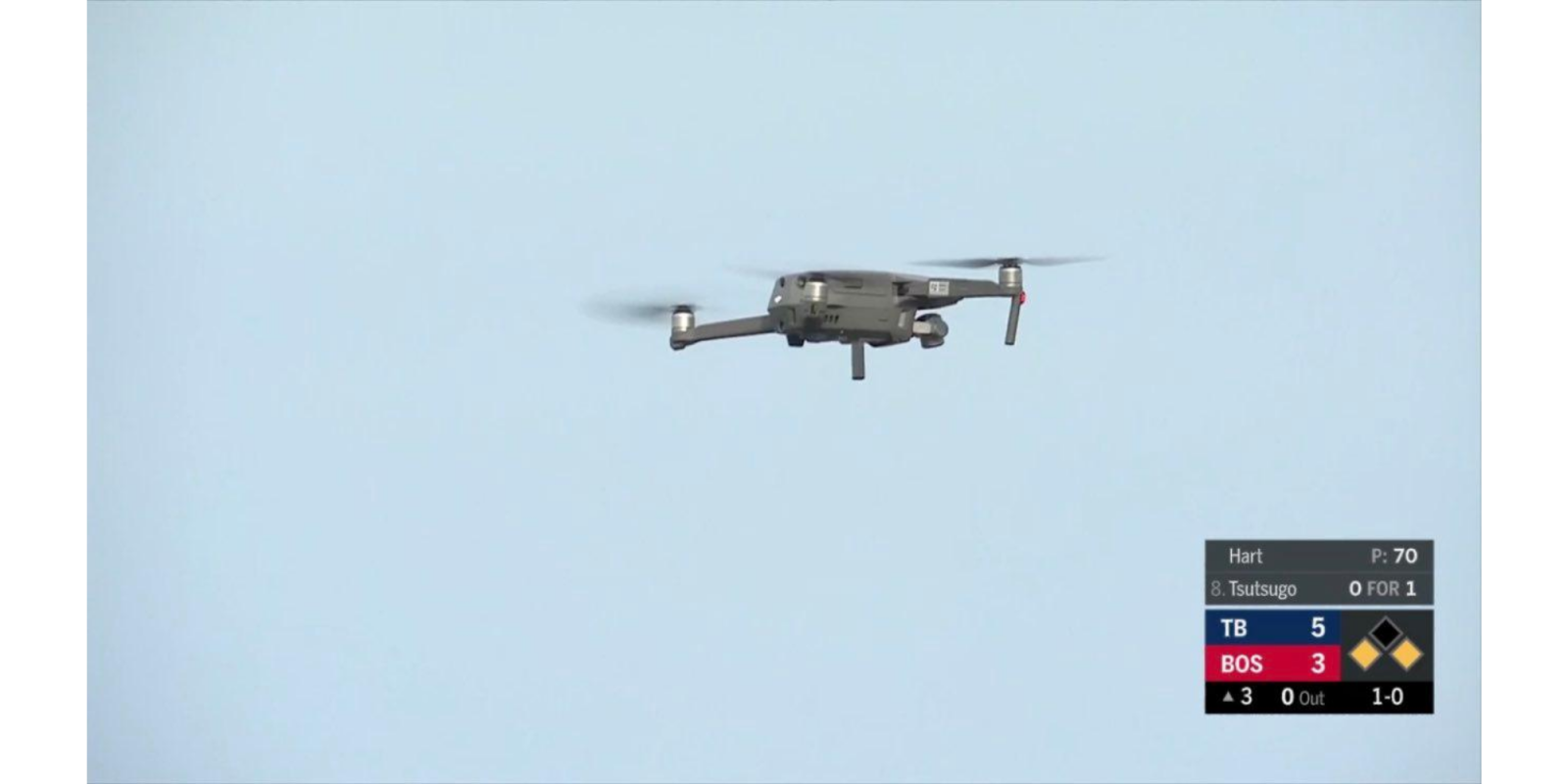 In the space of a little over a week, there were two high-profile drone incursions into public events in the United States — plus an alleged near-miss with Air Force One. All three incidents were troubling and left social media commenters complaining about drones. Given there will always be the odd rogue pilot who ignores the rules, what can be done? As it turns out, plenty.

The two Major League baseball incidents surprised us. In both cases, the drones were hovering over the field, effectively shutting down play. Athletes at the Target Stadium in Minneapolis tried to bean the drone with a baseball but missed. In that event, the drone flew away, and the authorities never found who was responsible. In the second incident, officers were able to find the pilot, a 16-year-old who received a pretty good lecture and who will also be having a chat or two with someone from the Federal Aviation Administration. As for Air Force One? The Air Force is currently investigating.

Sensitive venues are worth protecting. And though DJI does bundle No Fly Zones with its software, there are ways around those restrictions. Plus, there are plenty of drones in the air that have no such geofencing restrictions.

So what should stadiums like Boston’s Fenway Park or Target Stadium in Minneapolis do?

A growing number of systems are available for the remote detection and even disruption of UAS. DJI’s Aeroscope system, for example, can detect DJI drones from a considerable distance (up to 50km, or nearly 40 miles). In fact, not only can the Aeroscope detect DJI drones, it can tell you the model, location, and trajectory – plus the location of the person operating the controller – all within about two seconds of detecting the signal. This system has been used on multiple occasions in Canada and the US – and is especially useful for one-off events like air shows.

In fact, incidents at airports, prisons, and other sensitive locations have prompted the creation of technologies that can disrupt drone communication signals and even take a UAS out of the air.

At the high end of the spectrum are weapons like this Lockheed Martin system, designed for the US military to take down larger drones using a powerful laser beam:

Of course, systems like Lockheed Martin’s would be hugely expensive. A civilian enterprise likely would not be allowed to even purchase such a system. So that’s out when it comes to venues like Major League Baseball stadiums. But there are other options available – and a growing number of locations where this type of technology could be put to use.

One of the companies we’re familiar with is Bravo Zulu Secure, after seeing some of its offerings at a major conference of unmanned technologies. Here’s the description from the company website:

Bravo Zulu is the pioneer of cutting-edge technology for detecting and jamming unwanted drones. Founded on two decades of experience, it is Bravo Zulu’s distinctive design-customization and service process that has resulted in the delivery of innovative technology to high-profile clients in the Military, Special Forces, Secret Services, Marine, NGOs, and Multinationals, as well as Anti-Corruption Committees, Banks, and Security companies.

We contacted Bravo Zulu Secure’s chief technical officer, Philip Reece, and put forward some written questions. We started with the most basic, and pressing, following the MLB incidents.

Should public spaces like Fenway Park have drone countermeasures? Why?

Yes, public gatherings should have drone detection and counter measures, for the same reason they have land-based security: It is the venue’s responsibility to take the best care they can of their attendees/customers/performers/players.

Reece says there are three different types of people who might cause an issue with a drone at these kinds of events:

The stadiums are basically empty right now due to COVID-19. But that will change when the pandemic is back under control. And Reece says it’s easy to picture a scenario where a drone could cause major disruption:

The bigger problem at a public event is that a $500 drone with a $5 bag of flour dropped in a crowd can cause panic and injury through trampling. A drone hovering at a venue as we have seen can cause stoppages, inconvenience, costs, and many other negative outcomes.

Figuring out early there’s a drone in the air that could pose an issue is half the battle. There are technologies, like the aforementioned Aeroscope, that can quickly locate drones or pilots in the area. An early warning offers a huge advantage over simply reacting once a drone is visually spotted. These technologies can also pinpoint the pilot’s location as well. In the case of Bravo Zulu, the company employs radar, Radio Frequencies, and even video for detection.

Based on what these technologies pick up, Bravo Zulu uses AI to help assign a threat score. What size is the drone? At what speed is it approaching? What’s the payload? Does it appear to pose a threat? If so, and based on the data, how much of a threat? And what should be done?

The response will depend on the type of threat the drone is deemed to pose, and also the location. If you’re on a cargo ship in international waters and the drone is being sent by likely pirates to probe your defenses, you’re going to have significantly more leeway in your response than if you’re detecting a drone in downtown Boston. There are laws, and with good reason, that prohibit randomly jamming frequencies in most countries.

So the first level of response might be simply identifying the drone, locating the pilot, and dispatching security to talk to the person. In discussing other options, we’ll make the assumption that these hypothetical scenarios are taking place in a location where the following actions are legal. And – even in situations where they may not strictly be legal – there would certainly be circumstances where using these mitigation techniques would be justified.

Jamming the C2 (Command & Control) link will usually force the drone to auto-land. This response is baked into most drones as a safety feature. Once the signal is disrupted, it will simply enter that auto-landing mode and come down from its current position or Return to Home. If the latter, it can be followed to the ground.

Jamming comes in a couple of flavours: Broadband and narrow band. Bravo Zulu uses the more focussed narrow band method, which is also less likely to interfere with anything other than the specifically targeted frequency bandwidth.

Messing with the drone’s ability to maintain its GPS lock is also an effective technique. In fact, even if someone has pre-programmed the drone to carry out a mission – messing with the GPS will stop a drone in its tracks. There are other techniques, such as spoofing/hacking/injecting – all of which are methods to allow the ‘protector’ to fool the drone into accepting a new command, such as a change or course or immediate landing.

The final resort is blunt: Use a physical means of getting the drone out of the air. These could include a net, projectile, interceptor drone, or even a laser (similar to the Lockheed Martin system). This approach often comes with concerns over collateral damage (such as a drone dropping out of the sky), and is the least likely approach in an urban setting. However, it remains an option – and may even be a preferred option in certain locations or scenarios.

AI that allows the system to assess the ever changing threat faster than a human operator could, gathering information along the way from each system, comparing the data to known drones and their abilities, mapping the aggression of the flight path in relation to the target, monitoring how the drone responds to each counter measure. And alerting the BZ operators and crew as to the threat level and appropriate response.

DJI’s geo-fencing already does quite a good job of preventing people who don’t know any better from flying places where they shouldn’t. But there are ways to get around that system – especially for someone truly committed.

And, as we’ve seen at two Major League Baseball games in August, a person with a consumer drone can cause a significant incident – even if they were not acting with malicious intent.

As for those who might be considering a similar flight? As we’ve just seen, there are an increasing number of tools that can track you down without your knowledge. There’s a good chance a perpetrator would be caught – and a very good chance that a person caught would be charged.

As they should be.