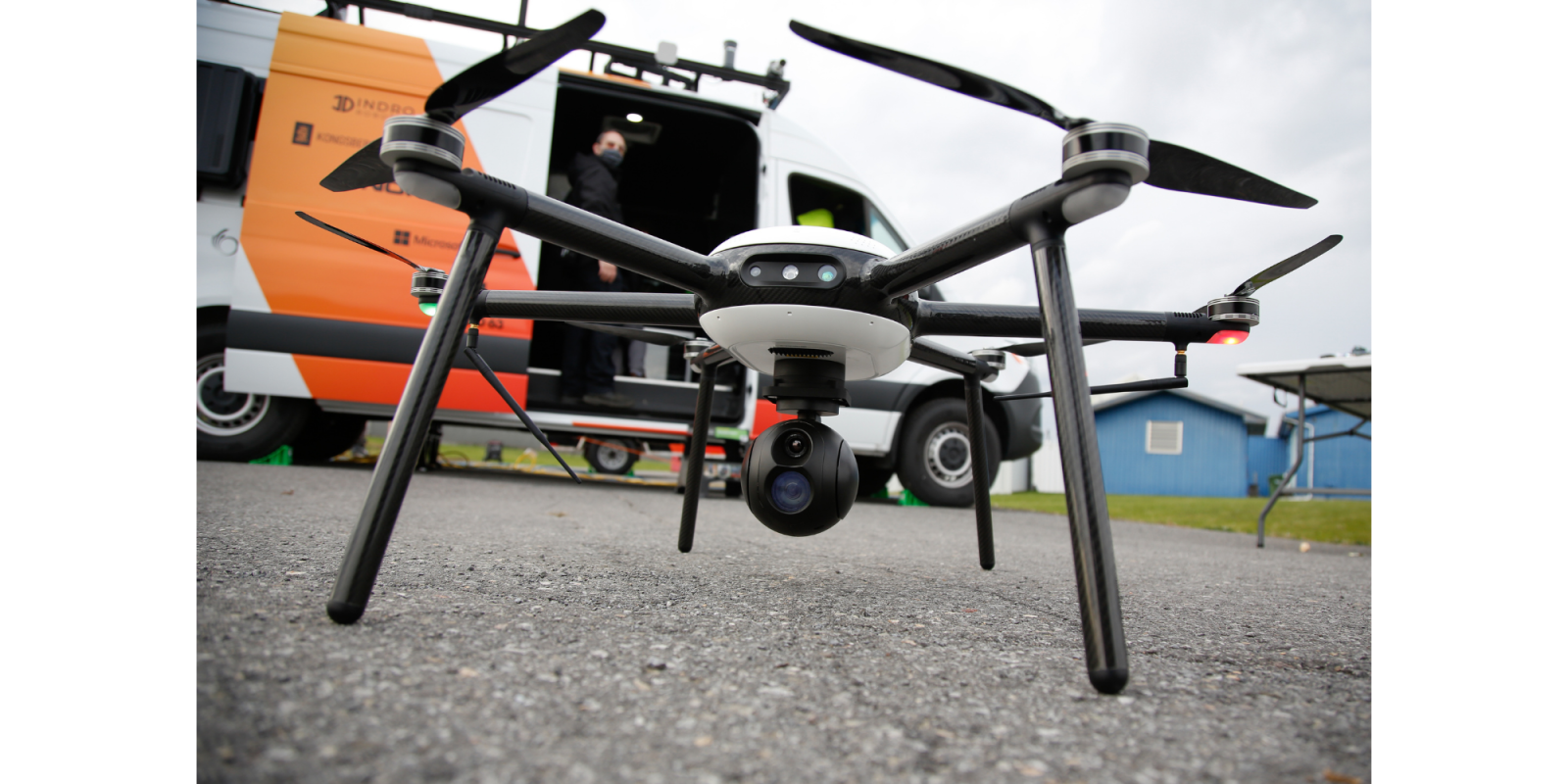 Canada had a big announcement today. It unveiled what it’s calling “Area X.O” — a “futureplex” of innovation located at what had been known as the L5 track for Connected and Autonomous Vehicles (CAV). Ottawa is committing $7 million to the venture, which hopes to create 200 jobs and ultimately lead to the Canadian manufacturing of zero-emission, electric vehicles. And yes, all of this has something to do with drones.

The announcement Tuesday – despite COVID-19 restrictions – felt like a big deal. There were federal cabinet ministers on a Zoom meeting, as well as the Mayor of Ottawa. All of them were excited to finally announce the newly formed Area X.O, an innovation hub for rapid prototyping, testing – and perhaps eventually certification – in the world of autonomous and connected vehicles. But today’s news made it clear that Area X.O will go beyond the world of self-driving cars. In fact, part of the announcement focused on news involving InDro Robotics — a Canadian technology company that is at the very cutting edge of drone capabilities and use-case scenarios. In Canada, by the way, drones are known by the term RPAS, or Remotely Piloted Aircraft Systems. It’s the same term used by the International Civil Aviation Organization, or ICAO. Don’t you love acronyms (DYLA)?

We’ll get to the drones in a moment. First, though, a look at the video introducing Area X.O:

This is more than a rebranding of what used to be known as the L5 Centre for Connected and Autonomous Vehicles. It’s a reimagined scope of what this place does and who it serves. There’s clearly a lot of excitement around technologies that could eventually become part of Smart Cities or perhaps even help First Responders.

Area X.O builds on our inception as the Ottawa L5 Connected and Autonomous Vehicle Test Facility and establishes a bold vision: to unleash and realize the potential, power and impact of visionary technologies to improve our world and human lives. Area X.O will enable diverse innovators and firms to develop, test, commercialize and export their solutions across many high-growth global markets. These include smart mobility, advanced communications, smart agriculture, defence and security, and smart cities. This critical federal investment will help us to achieve this vision, and increase the competitiveness of the companies we serve, and Canada’s economy more broadly.

Where are the drones?

We’re getting to that.

You might have noticed, if you watched the video above, that an RPAS (drone) made a few appearances. One of those drones was a specially modified UAS that you could think of as a DJI Matrice M210 on steroids. It has an Internet of Things router and can be flown over the 5G network (and 4G). That means it could be flown even by a pilot so remote she or he is on the other side of the country. Secure transmission protocols put in place by InDro also mean the drone’s live feed could be safely shared with decision-makers anywhere down the line without fear of someone hacking into the feed.

InDro has deep expertise with adapting and improving drones and has been involved with projects such as trials to compare whether delivering defibrillators and instructions by drone is a faster option than dispatching paramedics. In tests carried out in Ontario and Quebec, InDro has proven that drones could save lives in these scenarios. It has also delivered simulated blood products between hospitals in Montreal in another successful trial.

But what is InDro doing at Area X.O?

Part of today’s announcement involved a new vehicle associated with Area X.O’s “Command Centre.” It’s a van that can be deployed following a natural disaster or critical incident as a networking and situational awareness base. Should infrastructure like cellular towers be compromised, the van can create its own localized 5G network. This can be used by First Responders to communicate, transfer data – and even transmit and receive real-time data with the drone. It’s a joint project, with input and technology from multiple partners including Nokia and Kongsberg geospatial.

Canadians across the country are about to witness the power of private wireless and 5G-enabled drones – launched from the Area X.O 5G mission critical van – to support key use cases for public safety and industrial applications.  To enable these demonstrations, we are deploying our 4G and 5G solutions, Nokia Drones and our Integrated Operations Center. This partnership between Area X.O, Nokia and InDro Robotics will help jumpstart the deployment of private 5G networks.

InDro Robotics will tour that “mission critical” van in rural areas in the coming year. Its staff will demonstrate to smaller communities and First Responders how an emergency 5G network and drone can be up and running in a very short period of time – and how much data they can quickly deliver.

As a Canadian leader in drones having a long established relationship with a number of our Ottawa technology partner and the First Responder community, InDro proved to be instrumental in enabling the  Area X.O Mobile Command Centre to come to fruition, and now as we look to take the vehicle and connectivity of 5G out in to the communities we are confident it will offer new abilities and spark innovations that will increase safety and deliver new abilities to first responders and related industry verticals.

From InDro’s perspective, this is just the latest piece in an ongoing puzzle. The RPAS/robotics company has long had a relationship with First Responders. It has also helped out following disasters in Nepal, Haiti, and elsewhere, putting its gear to use. It’s a company that in many ways epitomizes the #DronesForGood hashtag.

And what about this van? The pilot can remain inside and operate the drone — and InDro has an ongoing permit with Transport Canada allowing it to carry out Beyond Visual Line of Sight flights, within certain safety parameters. The van even contains, from Kongsberg Geospatial, a display showing real-time manned air traffic — an added safety precaution when flying drones (and particularly drones in a disaster area, where helicopters frequently ferry goods and people).

Use cases would be for First Responders to be able to deploy the mobile command unit that would enable every asset (person, vehicle, drone) to be connected and share images (responders on the ground can see what the drone sees, request a robot ground vehicle to bring a stretcher to them, etc. ) all while the vans servers are running AI analytics to process the data (assist in search, process data, move live near zero latency back to command centres).

We asked InDro’s Philip Reece whether the van was a prototype or the real deal. Here’s his answer:

This vehicle is the prototype but fully deployable. The intent is to allow first responders, smart cities and industry to deploy a van with some or all of these abilities. The vehicle has been developed with the ability to upgrade and make additions as the use cases develop.

Certainly, the L5 CAV facility never quite caught the public’s attention – despite the fact it’s very cool and the only facility of its kind in North America. This rebranding, extra cash, and expanded scope bode very well for an innovative future and hub of developments within the very connected EV and Smart City sectors.

Now, if we can only figure out what that name means. I/O we get. X.O? We’re sure it will grow on us.