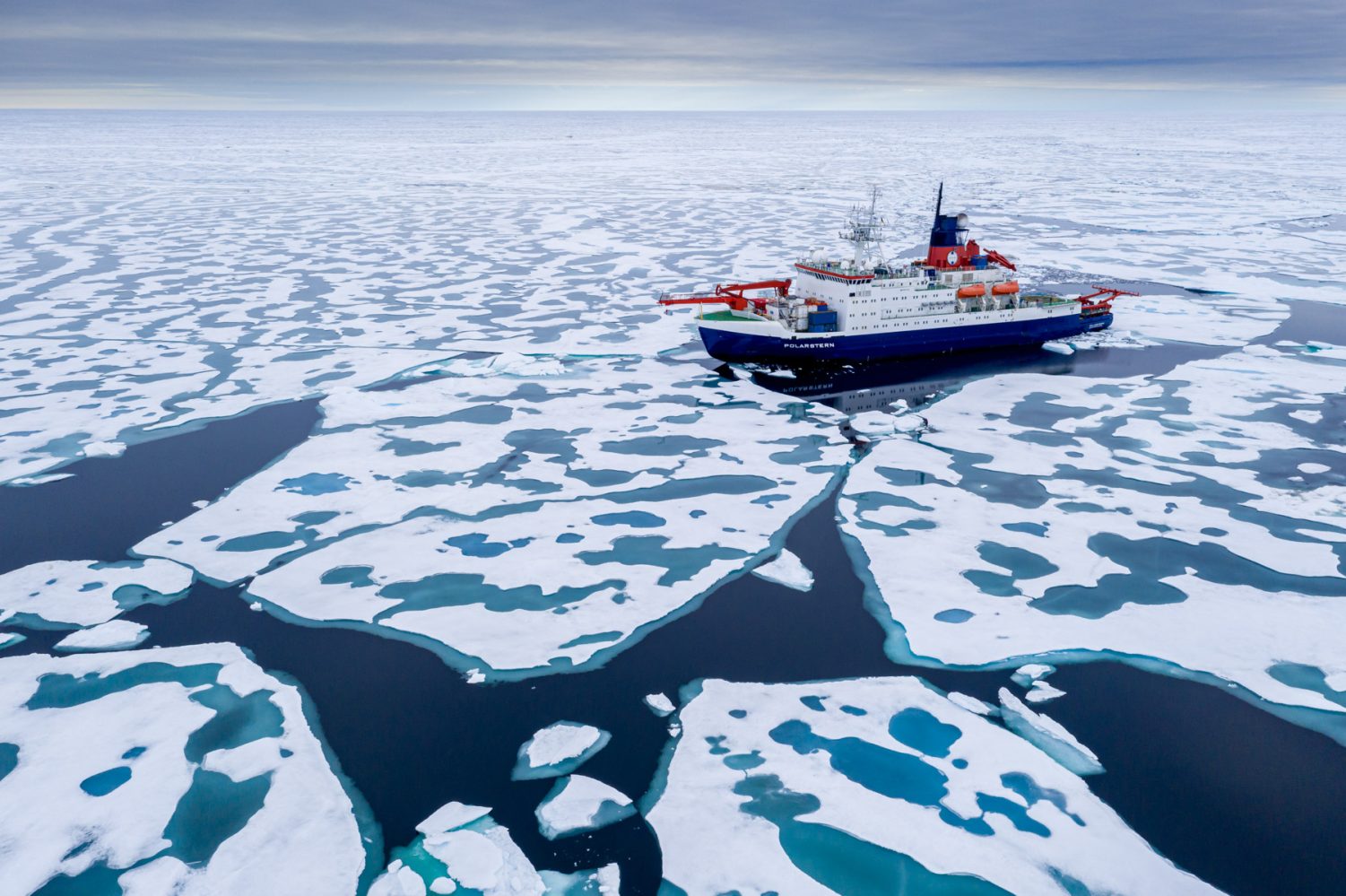 Heading for the new MOSAiC ice floe, Polarstern takes the shortest way to the area of interest: via the North Pole. On tghe way north, the sea ice is surprisingly weak, has lots of melt ponds, and Polarstern is able to easily break it.
0

A team that was part of a year-long Arctic mission recently flew a drone in bitterly cold temperatures at the North Pole. The mission? To gather data to better understand climate change.

Let’s just start by saying that – though we are not scientists – we accept there is a strong body of evidence that the global climate has been changing. Greenhouse gases have created kind of an insulating blanket that is contributing to warming temperatures and the melting of glaciers and polar ice. For an entire year, an expedition has been aboard the Polarstern, one of the most advanced polar research ships on the planet. It set out in September of 2019, and returned to port October 12 after spending much of the year deliberately locked in polar ice with about 100 researchers on board at any given time.

Two of those researchers had special training before leaving – to capture data using drones.

Before we get into the drones, let’s take a top-level look at the expedition.

On 20 September 2019 Polarstern departed from the Norwegian port of Tromsø, bound for the Central Arctic, the epicentre of climate change. Once there, the ship allowed itself to become trapped in the ice, and began a one-year-long drift across the North Pole, completely at the mercy of natural forces – the route and speed were solely determined by the ice drift, powered by wind and currents. Over the five legs of the expedition, a total of 442 researchers, Polarstern crewmembers, young investigators, teachers and members of the press took part. Seven ships, several aircraft and more than 80 institutions from 20 countries were involved. The researchers, who hailed from 37 countries, had a common goal: to investigate complex interactions in the climate system between the atmosphere, ice and ocean, as well as life in the Central Arctic, so as to better represent them in climate models. Now they have returned home with a wealth of impressions from the rapidly transforming Arctic, and with an unparalleled treasure trove of data, which an entire generation of climate researchers will focus on analysing.

MOSAIC is the name of the hugely ambitious research project. Scientists were researching five key areas: Atmosphere, ocean, sea ice, ecosystem, and biogeochemistry. Two researchers, with a drone as part of their toolkit, focussed on the ice. Specifically, they wanted to measure the reflectiveness of the ice.

The greater the reflectiveness, the more photons and heat get bounced back. The researchers wanted to be able to measure that reflectiveness. They also measured ice that had a thin covering of meltwater – something that has become more widespread with climate change. That layer of meltwater reduces how much heat is reflected back, meaning more heat is absorbed. Absorbed heat ultimately creates more meltwater.

You can see there’s the potential here of a pretty nasty negative feedback loop.

Not an easy task

Flying a drone in sub-zero temperatures is not a fun task. Fog can condense and form ice on the rotors. Batteries don’t last as long. And, of course, your fingers can get cold. That’s not great when you’re trying to make minute adjustments on the sticks. In fact, one of the researchers told Bloomberg Green just how difficult it was:

The freezing conditions were our main enemy, not only for the ice in the blade (of the drone’s rotors), but in our fingers. You need very delicate, small motions to operate the drone. When your hand is freezing you lose sensitivity, your fingers can’t control the features anymore.

The researchers also faced difficulties caused by magnetic issues. At extreme northern latitudes, Global Positioning System satellites are subject to small uncertainties – tiny errors that can really throw off a flight plan. In fact, when they finally got ready to fly they found that the navigation system on their drone simply wasn’t working. So they had to manually calculate direction, altitude, distances, and windspeed (and often, with freezing fingers). Despite that, they managed to conduct 18 flights over a three-week period.

The Polarstern returned to port earlier this month, and the data gathered by Roberta Pirazzini and Henna-Reetta Hannula (the other drone pilot) will now be analyzed. But they tell Bloomberg it was clear that things up there are changing. Back in August, when the drone flights began, the sea ice had already reached its lowest level on record for that month. In fact, it took the Polarstern just six days to travel from Norway’s Fram Strait to the North Pole – a voyage that would normally take longer due to more ice.

There were areas of open water everywhere, it was very easy to go there,” Pirazzini says. “That’s not nice if you think about the future of the Arctic. It’s a very fragile environment that will change without return.

Because there were long periods where Pirazzini and Hannula were not flying the drone, they took along a smaller drone so that they could practice flights in their cabin. We don’t know what they took, but it’s a good guess that it might have been a Mavic Mini with prop guards. (That would be our choice, you know, if we were super smart scientists on a big research ship.)

The Bloomberg piece goes into some detail on the overall state of the ice. It’s not good:

Earth’s northern icecap is heating about three times faster than the rest of the planet, disrupting a fragile ecosystem. Arctic sea ice, which melts during the summer and freezes back in winter months, shrank to the second-lowest level on record in September, the month when ice cover is usually at its lowest. Only in 2012 was Arctic sea ice cover smaller. Anomalously warm conditions in the Siberian Arctic, which suffered an unprecedented heatwave during the first half of the year, are now making it harder for the ice to reform. Arctic sea ice is currently at the lowest level for this time of the year since satellite monitoring began in 1979—37% below the historical average.

The work carried out on the Mosaic Expedition is important. We’ll be watching for some of the data to get crunched, and get back to you with the results.