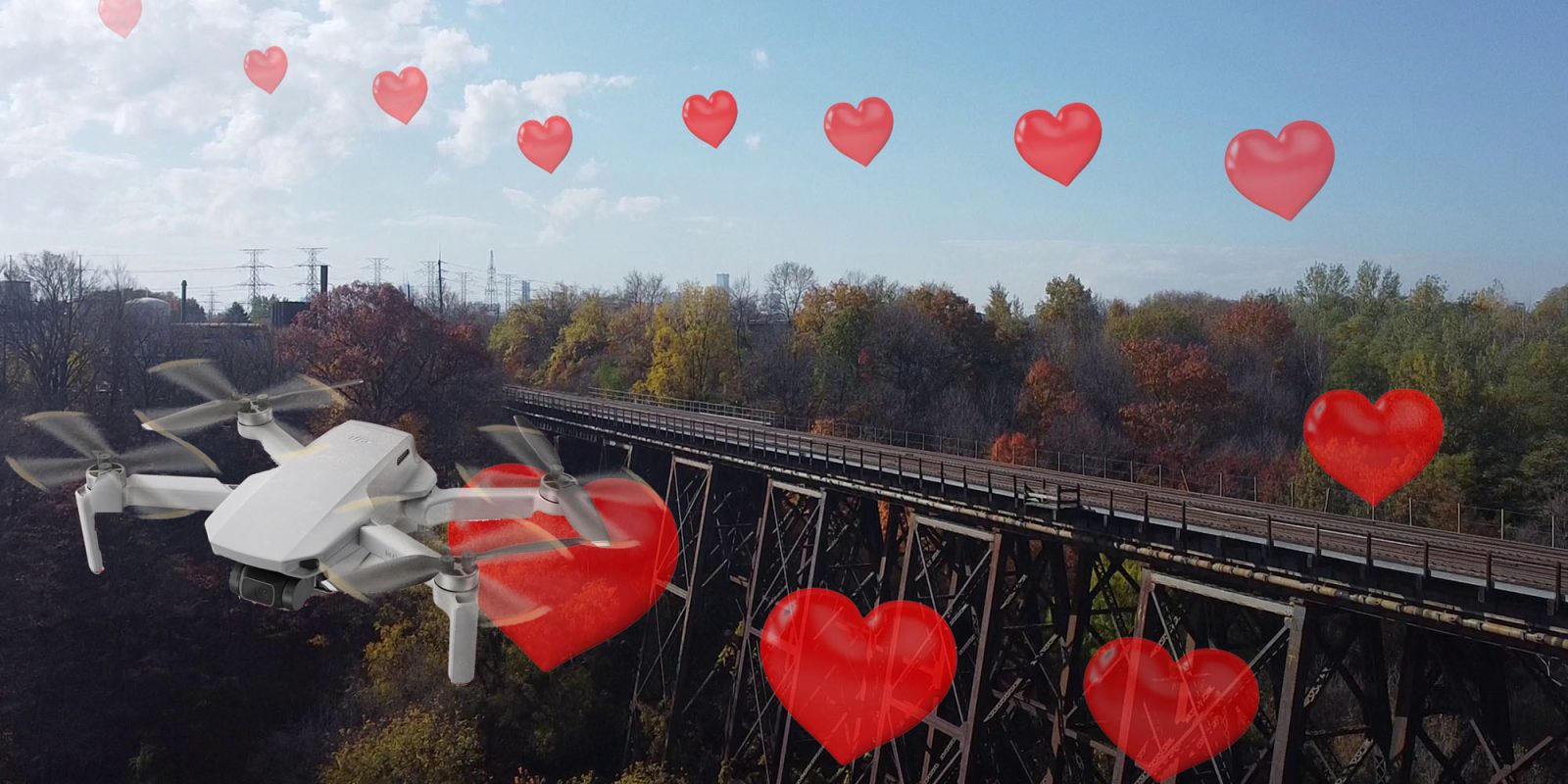 As an early drone adopter, my heart broke often. My first drone was a toy helicopter that took one fuzzy shot of me from about 40 feet up before I lost control and it hit the ground never to fly again. Then a series of mostly “toy” quadcopters, one of which was monstered by my niece’s dog. But last month, DJI loaned us a Mavic Mini (now discounted) and then the just-released Mini 2. I flew both for the first time within days of one another.

I think I loved these things before they were out of their cases. Both look as much like little sculptures as they do machines. The Mini is virtually review-proof at this point, so nothing I’ll say will change its popularity. But I can tell you this: This little 249-gram drone is a great first date. The batteries were charged and we were off flying together moments after opening the box.

My earlier experiences with drones suggested I could either fly or take pictures but not both.  But the Mini and the DJI Fly App are so nicely designed, the Mini flew and photographed within minutes of taking it out of the box. One of my first efforts was to try an Inception-style picture of my street. This does require video manipulation and could obviously be better. But the effect demands a rock-steady camera if it’s to work at all. And I got this result on my first try:

A serious blast of late October wind came out of the west and threatened to smash the Mini against our roof but the little guy gave me a warning and I brought it home with no sound of motor straining. Also, it warned the municipal airport zone is quite close and displayed a map showing where the Mini couldn’t fly.

I didn’t break her heart, but I did break her propellers — twice. Once during a rookie mistake of going forward instead of backward, it smashed into a building. The second time a gust of wind drove a pine branch into the props. In both cases, the Mini continued to fly and hover like it was on some kind of skyhook, but it didn’t ascend or descend as quickly. And that was with a half an inch sheared of two props.

The Mini’s removable propeller guards protect it from pilots like me.

I didn’t push the drone to see if it actually would fly for thirty minutes on one battery, but the Fly App seemed to indicate lots of juice left after fifteen minutes in fairly gusty air.

I was about to test out some of the more subtle charms of the Mini, including the Hyperlapse and Quickshot modes, but then the new Mini 2 arrived.

The drone itself looks and flies much the same, but there’s a LOT of new stuff inside. Photographers are going to love the new 4K camera and the ability to take RAW shots. And pilots who like to fly the Mini long distance will love the apparently more responsive Ocusync 2 transmission system. I say “apparently” because DJI loaned us these drones and I’m too timid to fly them very far or very long.  But I have no issue with the responsiveness of either aircraft.

The Mini 2 controller is bigger and frankly easier to use. Select the Cinema, Normal, and Sports modes from a switch on the controller instead of going through the App menu tree. I haven’t yet tested out the camera or long-distance responsiveness. But I can tell those with a ferocity for velocity won’t be disappointed with the Sports Mode. Good heavens, that thing can move; 46.8 k/h according to the specs. And those more powerful motors can apparently flaunt stronger winds than the original Mini.

Quibbles? Well, a few. There’s still no obstacle avoidance (stupid pine trees) and no Activetrack mode to follow a moving target. The controller on the new Mini fixes one of the issues I had with the old controller – it’s much easier to connect your smartphone. I thought the larger controller might mean a bigger case. But they look about the same volume and should take up about the same space in your luggage or bike bag.

Did you ever have to make up your mind?

Which Mini would I like to keep and fly? The Mini 2 is clearly a more sophisticated machine. But the price point for the original will likely continue to drop now that’s it’s younger sister is available.

I will say it’s easy to dream of going steady with either of these beauties.

David MacQuarrie is a 35 year+ veteran of the Canadian Broadcasting Corporation. He worked in St. John’s, Ottawa, Toronto and Beijing where he worked as a news writer,reporter, producer for the national and local television and radio networks. His stories on science and technology won ACTRA and Columbus awards. Before retiring he was the show writer for CBC Radio’s The Current.