This FPV pilot skillfully flies with one hand 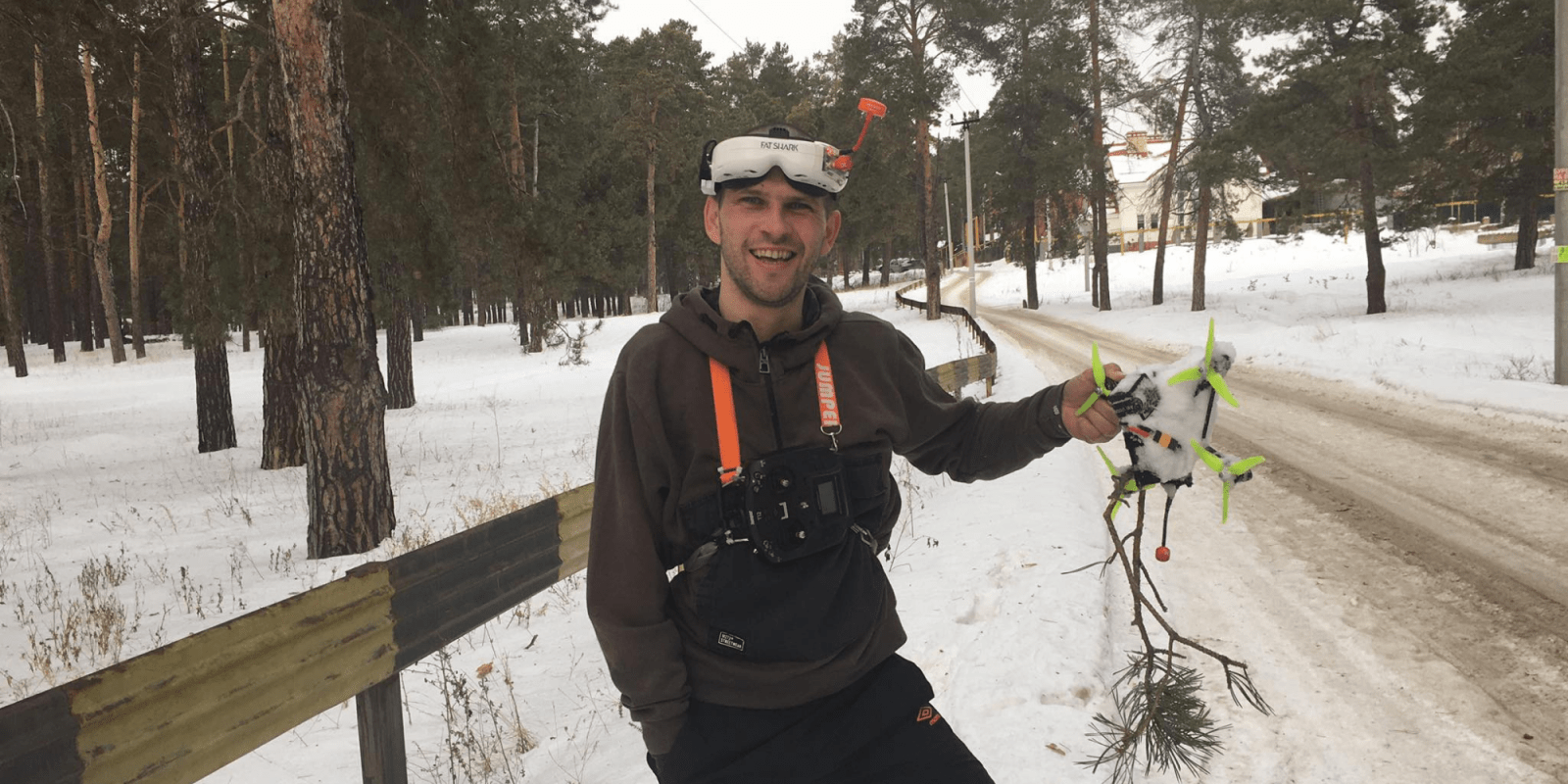 Extraordinary people do extraordinary things. And that’s why we’re writing today about Oleg Sergeevich Dudrin: He flies FPV with a single hand.

Learning FPV is difficult. It takes time, patience, practice. Even more than that, it takes commitment; the drive to keep improving even when you hit a wall (either figuratively or literally). Most find the reward – the sheer adrenaline rush – worth the effort. Now imagine trying to learn the hobby with your dominant hand tied behind your back. Sounds impossible, right?

Maybe to mere mortals. But not so much for Oleg Dudrin.

Meet Oleg. He’s the guy in this picture, with the big smile on his face and the quad coated in snow:

Dudrin is 35 and lives in the Russian city of Tolyatti. Although he was born right-handed, you’ll note he’s holding the quad with his left hand. There’s a reason for that: A motorcycle accident when he was a teenager resulted in the loss of his right hand.

“At 17, I was right-handed in life and now I’m left-handed

,” he wrote in DM interview with DroneDJ.

Learning FPV with one hand

This May, Oleg will mark an anniversary: It will have been three years since he started flying FPV.

But how did he start to fly? Well, he tried. And – like many of us the first few times – failed.

“I thought about how I would steer, and tried it. But it was hard to fly, and I began to train,” he writes.

“Well, it’s not easy for sure

. It’s hard to steer like this (but I’m more or less used to it, I think I can get used to it a little more). I would like to control with two hands, but – alas – I only have one.”

Think about that for a second. Better yet, if you’ve got a radio handy and a simulator, try it. You’ll quickly discover that this is insanely difficult with one hand.

And so Oleg started putting in time on the simulator. He uses FPV Air 2 and has logged 120 hours. What’s more, he’s on multiple leaderboards with really pretty great ranking. Check this out:

It took time, perseverance – and some pain

Oleg kept working the sticks, sending very distinct commands to two fingers. He took this picture after what he describes as “stabbing” his fingertips with the sticks. You can see how worn the flesh is on the tips of his index and little fingers. Made us think of guitar players who keep at it so long they develop calluses on their fingertips.

And it paid off

Did it ever. Oleg posted a video outlining his technique to his OneLeft YouTube channel. Just watch this:

When Oleg posted that video, people responded with respect and admiration. Several people told Oleg he flies better with one hand than they do with two.

“Bro the way you hold the radio is insane, mad skills,” wrote one commenter.

“Dam mate, you really make me want go fly more to get better. All I can say

Oleg says he’s heard from a few other potential pilots who face the same challenge he does. Apparently, they’ve been inspired by what he’s been able to single-handedly accomplish.