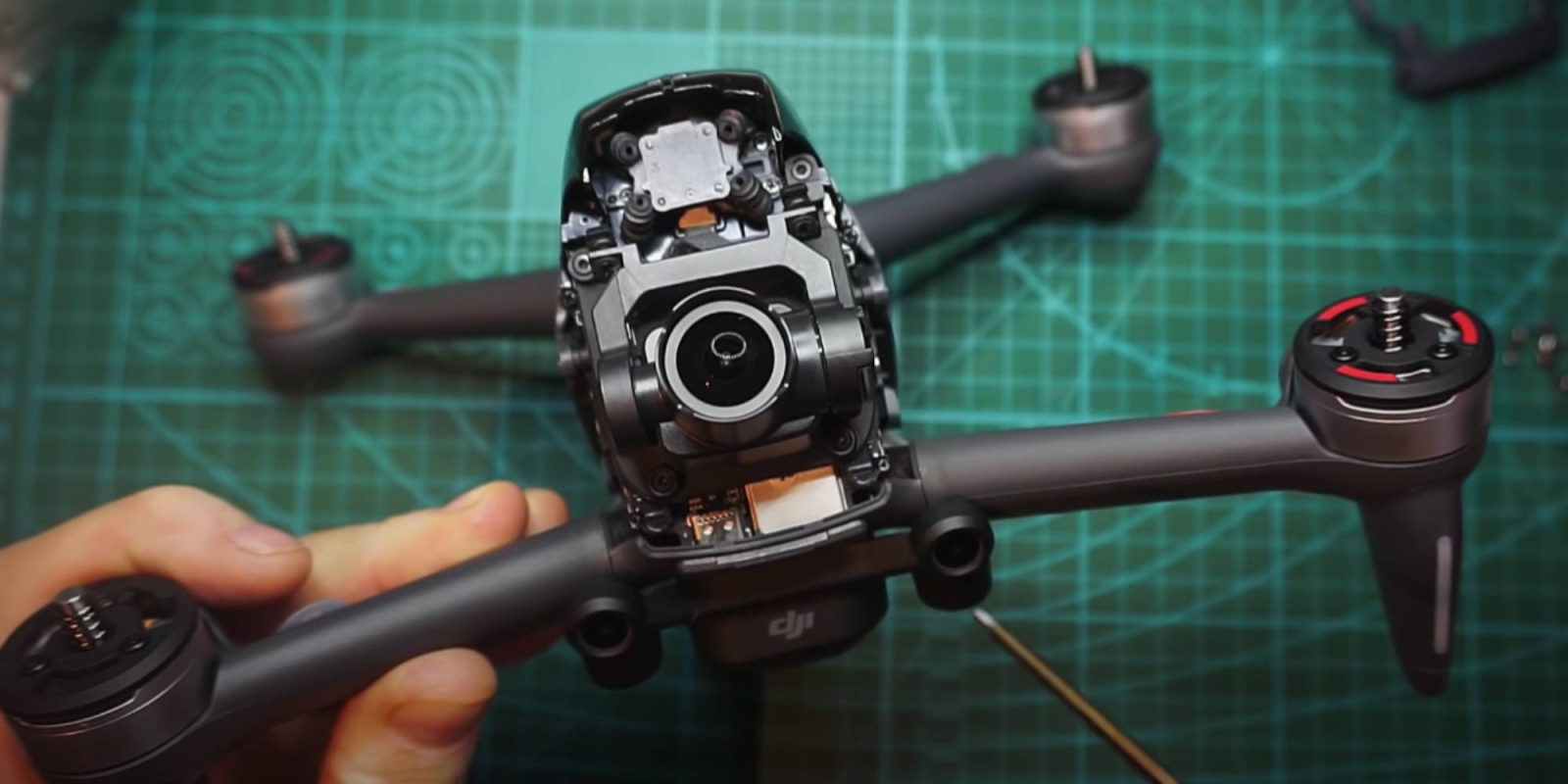 Not long after the DJI FPV drone was released, a teardown video has already appeared online, showing off the insides of DJI’s latest drone. Looking at the drone before tearing it apart, it looks very complex. But once inside, things start to get a little easier to understand and repair.

With its first FPV drone release, DJI has made sure to build it a little different from its previous drones to make it easier to repair and replace parts. DJI has also put various parts expected to break on its website for those wanting spare or replacement parts.

Before we get into the teardown, DJI already has a few parts available in its store. For now, you can only get a replacement gimbal camera, landing gear, and arm braces, which look to be an add-on to make the drone more resilient to crashes.

The limited number of parts in the store could just mean that these are the only things you can officially replace, but to us, it seems like DJI doesn’t have enough stock to be selling replacement parts just yet. We also expect the third-party market to become a big thing around this drone, allowing you to customize it to your liking.

Lots of screws, no glue

As Livyu FPV begins taking the drone apart, you notice that it is all held together with screws, which is great to see. There doesn’t appear to be a single blob of glue throughout the whole teardown, making it hard to take apart. The closest thing this drone has to glue appears to be the thermal pad used to keep it cool.

Something that can’t be avoided for the more internal components is solder. For these components, you will need a soldering iron, which isn’t too hard to use as the pads provided by DJI are larger than those on its other drones as it knows which components are likely to break.

The DJI FPV drone is a big thing because the core components are all separated and on their own boards. The GPS, flight controller, and all-in-one ESC are all separated from one another, making a repair cheaper and easier. The flight controller is sandwiched behind the gimbal’s protective plate and the battery housing, meaning it will be less likely to break in a crash.

As the ESC is a component that is likely to burn out over time, DJI has positioned it at the rear of the drone, with canopy and heatsink the only things in the way, which are both easy to remove. Once you are the ESC, you can easily de-solder all of the motor wires, unscrew it, and drop a new one in. This repair should take around 30 minutes to do.

The arms, motors, and antennas are all fairly easy to repair as well. The antennae use connectors instead of solder joints for the ones in the arms, allowing you to change them out after a crash quickly. The arms are connected to the drone with screws, and the motor is connected to the arm with screws, making it all fairly easy to replace, other than routing the cables through the drone.

The part that will likely break the most in crashes is the gimbal. DJI knows this and has made it pretty easy to replace. All you have to do is remove the canopy with a few screws, unscrew a metal bracket holding down the gimbal cables, and unscrew the gimbal. That’s it. To limit the damage of the rest of the drone, DJI has a metal place protecting the rest of the drone and the battery, which also doubles as the flight controller’s cooling system.