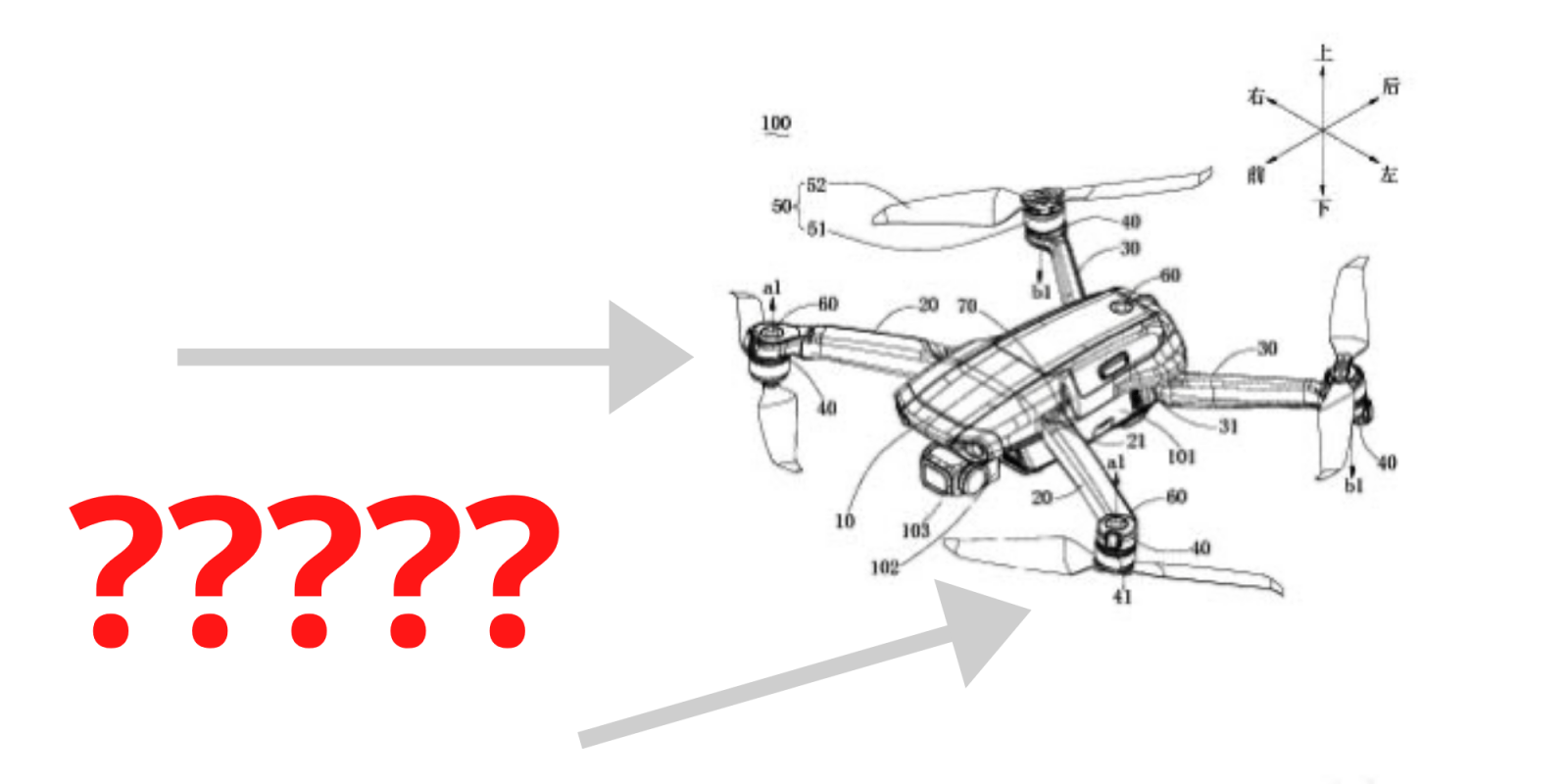 The most prolific leaker of DJI information is at it again: @OsitaLV says he’s seen new a DJI patent filing that appears to take a page out of Skydio’s book. He’s got a low-res image to back it up.

@OsitaLV has a pretty good track record of getting the inside scoop, particularly when it comes to DJI. He clearly has some connection inside the company who is willing to share information – and that’s not surprising, given the company has 14K+ employees. Now, @OsitaLV has something new and very different for DJI.

And it appears to take a page out of Skydio’s book.

@OsitaLV made a series of three tweets. The first one got our attention:

The second tweet in the series sheds more light on the topic – and what @OsitaLV apparently saw:

Whaaaaaaat? That would be a radical design change, and would also most certainly be taking a book from Skydio’s page. If only there was an image of such a device.

Okay. Let’s assume this is real. The most obvious difference is that the front motors are mounted on the bottom of the arms. That’s the same kind of design we see in the Skydio 2:

Why would DJI do this?

If this is genuinely a DJI patent drawing, and if DJI was pursuing development of a drone based on this design, the question is: Why?

The answer, hypothetically, is this: The Skydio drones feature six 4K cameras in addition to its main gimbaled camera. These other six cameras are used to capture a real-time, 360° view of the environment as the drone flies. That’s just one ingredient in the secret sauce that makes these drones absolutely phenomenal at tracking a subject, while avoiding obstacles.

That’s an area where DJI products – despite all the other technology they pack in their drones – come up short against Skydio. They simply can’t track a subject and negotiate their environment as well as the Skydios. We wrote last week about this comparison between the Skydio 2 and the new Air 2S in the tracking department, pointing to this video:

So you can see there’s a reason why DJI might want to improve its tracking/avoidance capabilities. And a full 360° view of the world around it is arguably part of that solution.

Let’s take another look at that image.

Though it’s tough to see because of the resolution, there are features labeled A1 and B1. These are the spots above the front motors and below the back ones. That’s exactly where Skydio has four of its six cameras. And that does make you wonder…

Other drone geeks on Twitter (plus us) immediately wondered about a couple of potential issues with this design. How would those front arms fold? The old way wouldn’t work with this design. And no matter how we look at it, we can’t see this folding up into a tight package. Perhaps the forward arms could fold directly forward, but then they’d stick out for transport and storage – and part of the value proposition of the Mavic line has been that everything folds down to a compact size.

Point two: Wouldn’t you risk getting the props in the shot, especially with the gimbal tilted even slightly down? Sure looks that way.

We honestly don’t know enough about this image. But if we were to speculate – and we kind of have to, because DJI never comments on images like this or unreleased products – we’d say this is possible. If DJI has determined it needs to match Skydio in the tracking/obstacle avoidance department (and we’re guessing it does feel that, or certainly should), then this might be a viable design.

As for @OsitaLV’s comment about the Autel EVO II Pro, we can only surmise he’s hinting at 6K resolution.