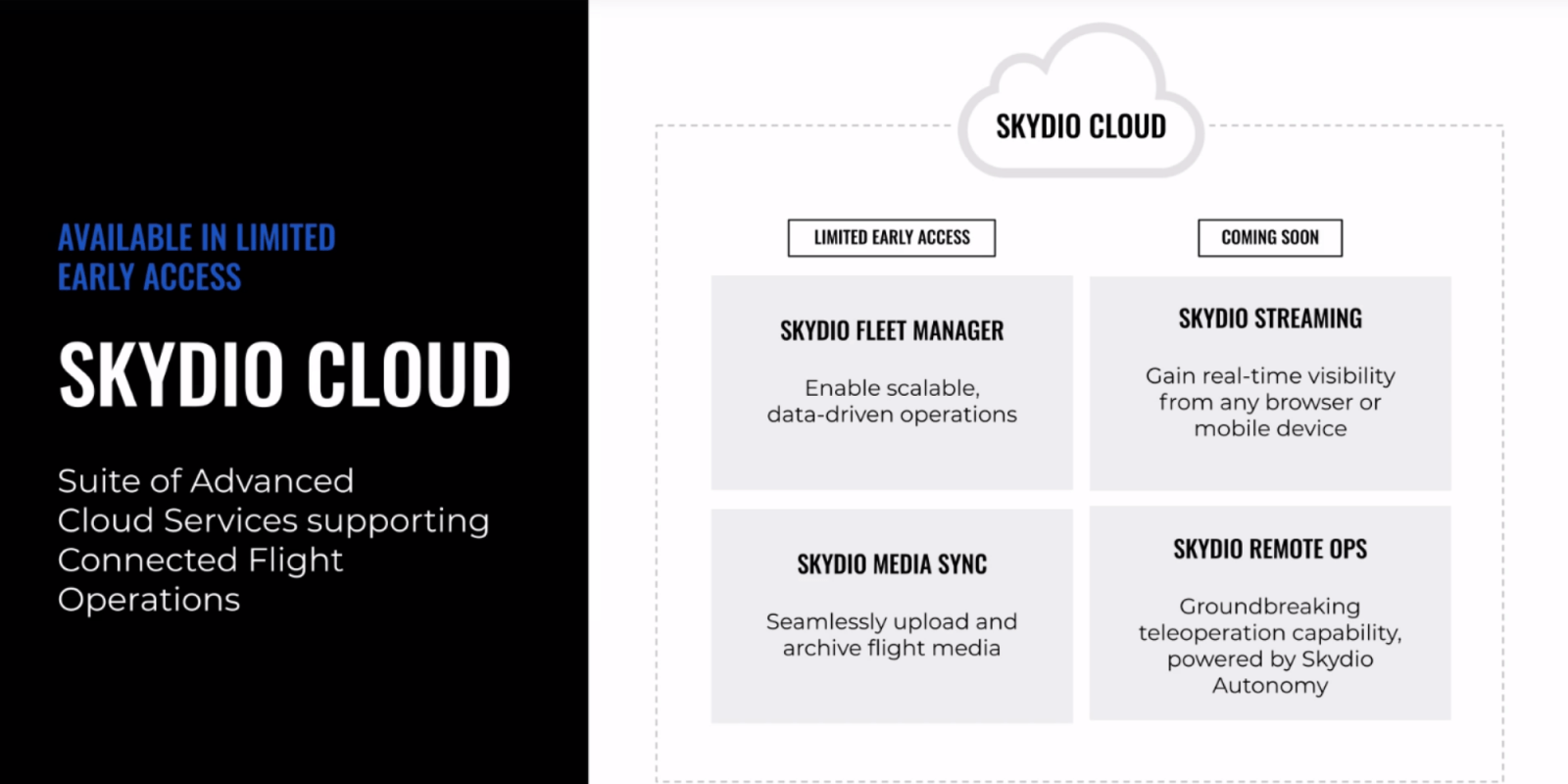 Skydio, the US-based drone company that emphasizes Artificial Intelligence and automation in its drones and work flows, says the next chapter in the evolution of drones is all about software and autonomy. The company outlined its position, as well as some new products, during the online AUVSI XPONENTIAL Conference, which is this week.

There’s no question that Skydio drones can carry out tasks that would prove challenging for other drones. For example, a Skydio drone can carry out a scan of complex structures with confined spaces in a GPS-denied, interference-laden environment. What’s more, it can figure out the whole process for scanning and carry out the job by itself, after minimal input from the pilot.

Skydio says this ability – in conjunction with some new software and hardware offerings – are the future.

We’ve attended AUVSI’s XPONENTIAL in the past. It’s considered a “must-attend” event in the drone industry. Of course, usually the whole conference would be in person. This year, it’s split into two events: The online conference taking place this week, followed by an in-person gathering later in the summer.

XPONENTIAL, in addition to seeing the cool floor displays, is always a great opportunity to learn. And so we hopped on for the Skydio presentation this week.

Head of Product Management Roy Goldman said Skydio was founded with a vision of all the amazing things that drones can do “to make the world a better place.” He continued:

Not only in the consumer world, but also to fundamentally change industry and other professional fields – whether it’s automating inspection, or mapping or monitoring the world’s infrastructure, or using drones to help with situational awareness. Putting drones into challenging situations ahead of or instead of people.

But there’s a limitation holding drones back from this potential, says Goldman. It’s the way drones themselves operate.

“It’s hard, and it’s expensive, to train and scale up expert pilots. And the risk of crashing drones is very high, even for experts.”

“At Skydio we believe the way to fix that, and to unlock that vision, is with autonomy.”

That doesn’t mean taking pilots out of the equation entirely. But it does mean using AI and automation to let the machines truly do the lion’s share of the work. And while software plays a significant role here, Skydio says it’s also the hardware of their drones themselves, which Goldman says “navigate the world with unmatched intelligence.”

(As an aside here, we’d point out there are plenty of third-party applications that can currently be used with drones to automate tasks like photogrammetry, surveying, scanning etc. But Skydio’s drones have some extra features built-in that the company believes makes them more suitable to these tasks.)

“Our vehicles see the world in every direction,” says Goldman. “We’ve got six 200-degree fisheye lenses on every vehicle that create a real-time, immersive 3D map of the world that we’re flying in. The result is a smart drone that’s very easy to fly, and very difficult to crash.”

(In fact, at some of the company’s introductory sessions for First Responders, people are challenged to take a Skydio 2 and deliberately try to crash it – even if they’ve never touched a drone.)

Those cameras give Skydio drones a constant awareness of their surroundings. But they also do more. In conjunction with the company’s Skydio Autonomy Enterprise Foundation, those cameras can be used to provide the drone operator with a 360-degree view. From that “big picture,” a pilot can quickly zoom in on any feature of interest from within that image. It’s a cool feature we can see being used by engineers, law enforcement – anyone who wants to rapidly identify a point of interest.

Those same cameras are also what allows Skydio drones to navigate even in tight spaces, such as within girders or lattice structures. These are structures where it would be very difficult – if not impossible – for most other drones to tackle similar surroundings. Skydio drones can now navigate surroundings with as little as 4 inches of clearance on either side of the drone. That’s pretty impressive.

So imagine that you’re an Enterprise company operating at scale. You have multiple drones in your fleet and you’re constantly capturing data and swapping Micro-SD cards. Is there a better way? Skydio thinks there is, launching its new Skydio Cloud feature this week. (We wrote about this earlier.)

For this segment of the presentation, Skydio’s senior director of product development, Mike Ross, took over.

“You really need a robust fleet management platform to wrangle all the data that your drones collect,” he said. “Skydio Cloud represents a new layer in the Skydio architecture, and will become our foundation for connected flight operations moving forward.”

Though it’s just being released and not all functionalities are up and running, Skydio has big plans for its Skydio Cloud feature.

Right now, it has Fleet Management tools as well as automatic media syncing for getting data off the drones without pulling cards. But it has some other capabilities that will be unlocked in short order. Here’s Mike Ross:

Later this year, we will release two additional capabilities that will truly unlock the power of Skydio’s autonomy. Skydio Streaming will allow you to share real-time video via Skydio Cloud with anyone in your organization, transmitting video directly from the Skydio Enterprise controller, the Skydio Enterprise App, or directly from the vehicle itself.

If you’re a regular, you’ll know that we’re pretty impressed with some of the scans Skydio drones have carried out using its 3D Scan software. Available for an additional annual fee, this software is immensely powerful yet is quick and simple to learn. Simply identify a volume that contains the structure you’d like to scan, and Skydio does the rest.

Roy Goldman says this kind of software and automation truly unlock the capabilities of Skydio drones:

It’s the first product of its kind. 3D Scan autonomously and adaptively analyzes any structure or scene, and then generates and executes a complete and efficient photo capture plan that captures every meaningful angle of that structure or scene… 3D Scan is really at the beginning of a new era of inspection and mapping.

In fact, a major Japanese firm that carries out bridge inspections has been using Skydio drones and this software, and has realized tremendous efficiencies in doing so:

Skydio also pointed out that it’s new X2 series of drones are now shipping, as well as a new offering in that line. The new addition drops the thermal camera and offers a wide-angle color camera designed for getting up close and personal during close-proximity inspection work.

Skydio has announced that it has a major event planned for June 2. The company hasn’t released many details yet, but we believe it will fully showcase some of its new software offerings and officially launch 3D Scan. You can register here. And if you’re looking for more information from Skydio, you’ll can head on over to their website.