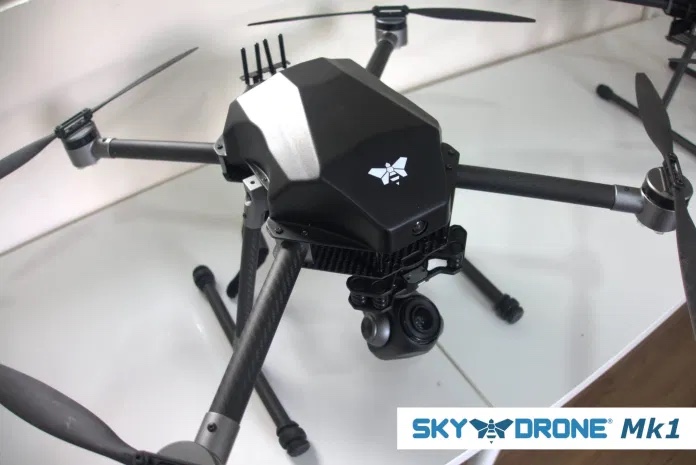 Sky Drone Mk1’s 5G connectivity gives it virtually unlimited control range. In theory, the craft could be flown by a pilot half the world away. The company believes that liberty will be a huge asset for enterprise clients expected to be the Mk1’s primary market – especially those often flying Beyond Visual Line of Sight (BVLOS) missions.

Production of the Mk1 came in the wake of last August’s partnership between Sky Drone and China Mobile Hong Kong, as the latter evolved its networks from G4 to G5 technologies. As part of that push, China Mobile created an innovation platform. Through that, various partners accompanied China mobile’s tech evolution by adapting their remote capabilities that stood to benefit from 5G integration.

The 5G Mk1 requires only a data-enabled SIM-card from any major carrier in the world to connect. It can be controlled from a PC or tablet-based ground station with an optional joystick or gamepad.

Since its 2012 inception as a division of Skylab Mobilesystems Ltd., Sky Drone’s focus has been the connectivity technologies of unmanned aerial vehicles (UAV). It rapidly established itself as a main player in 4G/LTE devices.

Its collaboration with Droniq – the joint venture between Germany’s air traffic control organization and Deutsche Telekom – gave Sky Drone enhanced insight to the importance of efficient drone connectivity as used by public services. Boris Boege, Sky Drone CEO, believes the integration of 5G will be an important transformational step in advancing drone operations.

Sky Drone Mk1 is a major milestone in the evolution of autonomously flying drones. It is now possible to order a ready-to-fly drone from us, off-the-shelf, which can be controlled from anywhere in the world.

The UAV bones and guts

Full Mk1 details are available on the pre-order page.