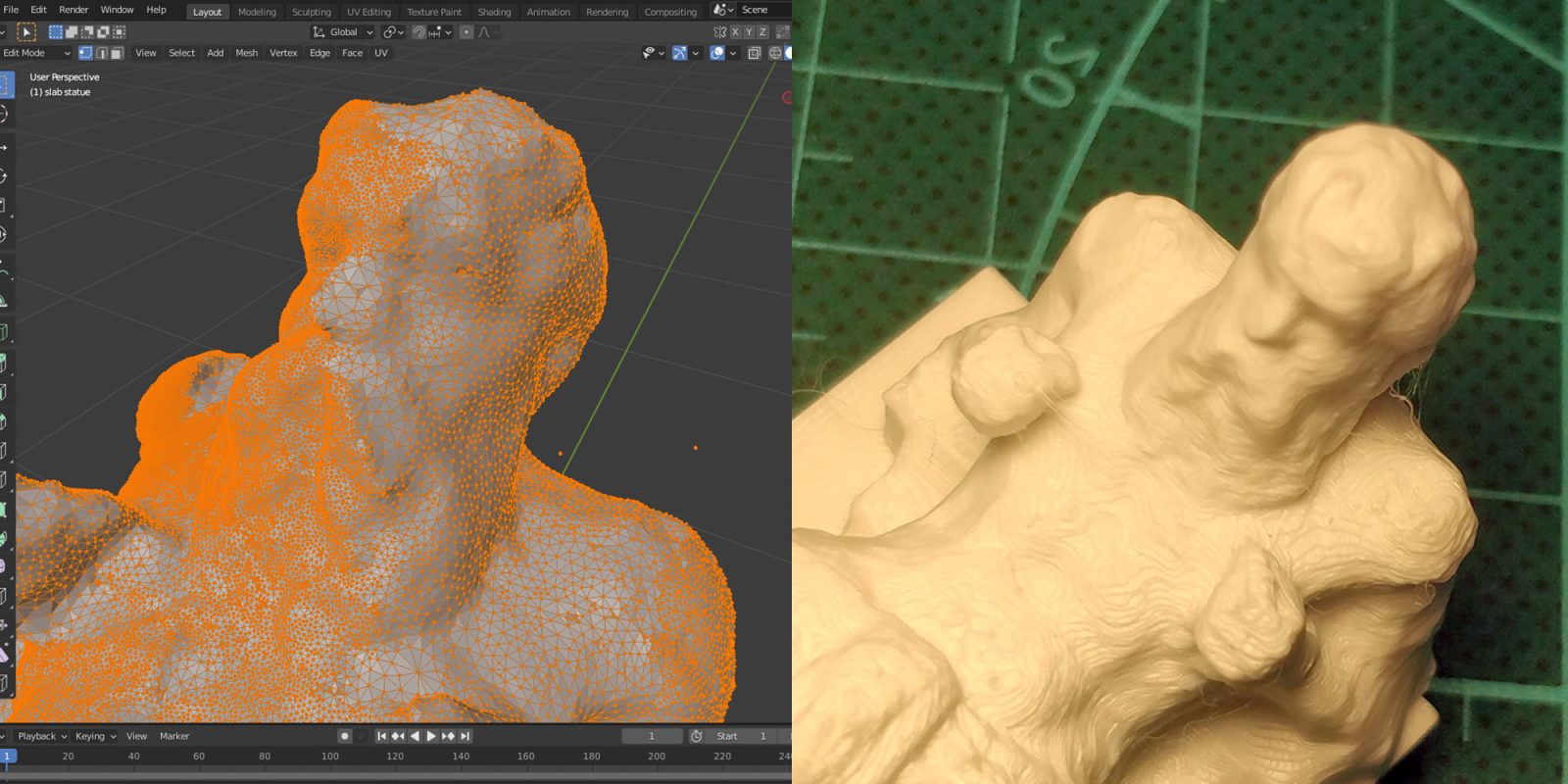 A lot of drone pilots who dream of using their machines to scan the world likely find those dreams crashing to earth when they learn the price of photogrammetry software. Some packages cost far less than others, but Meshroom can’t be beat for its price point. If you want free drone scanning software, here it is.

In Part I, I showed how I used DJI Mini2’s quickshot Circle mode to do a quick 360-degree video of a sculpture. The video was then converted into stills, and the stills loaded into Meshroom. Meshroom then calculates what the object must look like in three-dimensional space and outputs the results as an .obj file. Amazing.

Although I should have taken more close up shots of the sculpture’s face.

If you hope to make a 3D model of the file, however, there’s some editing to do. All of the stuff we don’t want to print must be removed.

I use Blender (free!) for this. And I’m afraid this is the bottleneck. Blender is even more miraculous than Meshroom, but its a long, slow journey to the top of Mount Blender. I’ll assume you’ve got a little experience and point to the many YouTube tutorials that can help you learn. But if you just need a refresher, this is Blender basics and this is how to select and remove vertices. I wish I’d looked at the second one more carefully before I began removing points.

I’d like to provide more guidance here, but this is a site for drone enthusiasts, not 3D modeling enthusiasts. The boss will flip if I get into the weeds with Blender. Suffice it to say, you need to use the editing tools to select the points (vertices) you want to keep and remove the ones you don’t. Watch the tutorial videos, and expect it to take time. Save the project along the way and eventually you’ll get it. My model was still a little ragged where it once touched the ground, so I built a plinth for it to lie on.

Once you’ve trimmed it to your satisfaction, save it and export it as an .stl file, the format most often used in 3D printing. I have a Prusa Mini and the Prusa slicer software (free!) is quite versatile in reducing .stl code into the printer-friendly G code. I know this is a lot of steps but there is a certain manufacturing logic to it.

A high-quality print took about three hours and a regular quality print was about half that. The face isn’t bad, but I feel it could show more detail. I’ll take more closeups next time.

What’s next for scanning

It seems like we’ve come a long way, but the time it took to take the video, learn Meshroom, and relearn Blender was less time than it took to write these articles; altogether about four hours, not including the printing time. Are there any limits? Well, I’ve run into one. Drone pilot Steve Hamilton took this lovely 360 drone tour of Dover Castle.

I thought it was a perfect challenge for Meshroom, but this was the result. I think we can agree it’s not worth printing. But I do like the way it captured the little cliff face.

What went wrong? Maybe the drone was too far from the castle. Maybe the resolution wasn’t quite enough. Maybe I didn’t use enough stills. (My favourite explanation so far.) There’s lots of room for experimentation and refinement. But this guy shows it can be done. Here’s a successful landscape rendered by Meshroom with far fewer photos than I used for Dover Castle.

So if you’ve got more time than money, this wonderful mix of drone, Meshroom, and Blender may be just the thing you’re looking for to start scanning and printing the world.