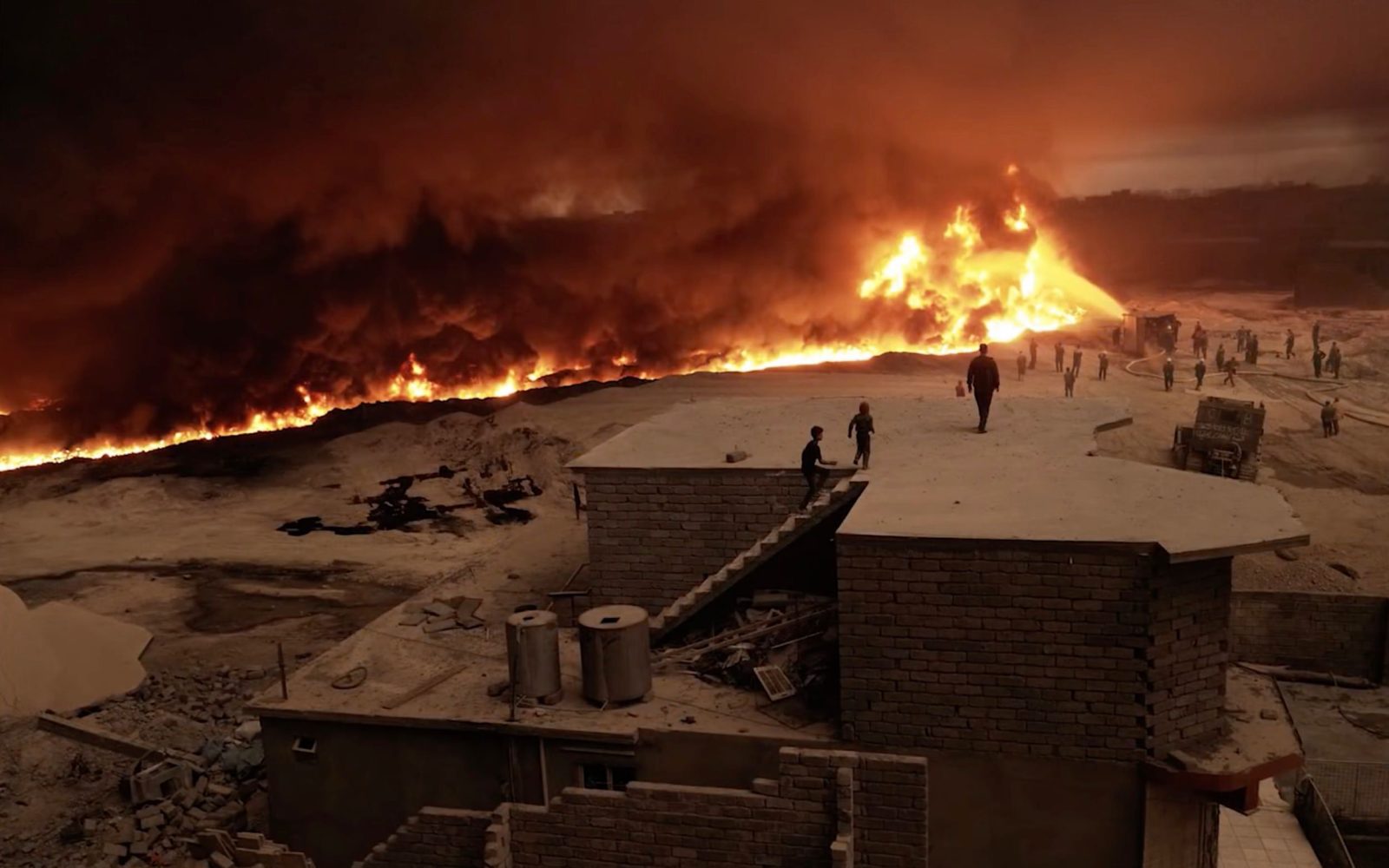 Photographer and director, Joey L recently was invited to talk about his portrait and drone photography in the Syrian conflict zone at Hardwired NYC. In the 21-minute presentation (see video below), he explains the crucial role cheap consumer drones have played in his ability to capture the warzone from the Kurdish perspective. He also talks about what it was like to fly a DJI Inspire drone through, what the locals called, the ‘ISIS Winter’ in Al-Qayyara, Iraq.

Flying drones in a conflict zone

Photographer Joey Lawrence, better known as Joey L explains how cheap consumer drones helped his portrait photography by providing context to his pictures. Some of the drone photos were of such high quality that they could be part of a series of photos that were taken with the high-end medium format camera that Joey used during this assignment. He had this to say about cheap consumer drones, such as the DJI Phantom:

“Aerial photography that was captured with the most basic, cheap consumer drones that are available to everybody now. I mean, to think about even doing this kind of image making with this level of quality for so cheap even three years ago was just unheard of. So, in the past, you’d have to ride in a helicopter, which is an extremely dangerous or expensive thing, in a war zone. Or be like the NGO photographer George Steinmetz and literally strap propellers on your back and fly around. But nowadays you can do these things with a $1,000 drone.”

In the video, Joey L talks about capturing the Syrian conflict from the Kurdish perspective as well as a project in Iraq with the NGO Oxfam. Although he does not view himself as a wartime photographer, Joey L did get very close to the front line with his camera and drone. The sky above the warzone is ‘owned’ by The Coalition, which effectively means the American Air Force. Joey explains how at some point his drone got jammed and how the return-home-button saved it:

“My drone suddenly got jammed with some electromagnetic pulse and I was flying from the rooftop. And at that point I was embarrassed because I thought it had just fallen out of the sky. But then a rival militia to the one I was with started shooting at it because it was hovering over their area. And I didn’t know what the hell to do with myself. I kept pressing the fly home button which is what total new flyers do and eventually it came back but those guys in the other neighboorhood, I mean they have every right to shoot at a drone because although I am using this kind of stuff for my photography, the same technology we know if also being adapted for let’s say more nefarious purposes.”

In the past, we have reported on how drones were being used to drop grenades and disrupt operations on the ground. In his presentation, Joey also references the ammunition depot west of Mayadeen, Syria, that we covered here. That was also blown up by grenades or small explosives that were dropped from drones.

Locals called it the ISIS Winter

During the Oxfam assignment, Joey flew his Inspire drone very close to burning oil wells of Al-Qayyara, Iraq. The oil was set on fire by ISIS to provide cover as they were retreating from the area. Joey commented on what it was like to fly the Inspire during those conditions.

“Flying a drone in this kind of, let’s call it weather is insane. The locals even dubbed it themself as the ISIS winter because the black cloud spread out for miles and was stuck there for months and that it even affected agriculture. So I would fly the drone in the air. I would have a visual on my screen. I would set up a shot and fly it back and forth and within a couple of minutes my Lens would be completely caked with oil and grease. I’d have to rely on the navigation system to fly it back and land it.”

The drone and portrait photos helped to put pressure on The Coalition, who in the end brought in extra supplies and equipment to help get the fires extinguished. Especially portrait photography and the resulting photos, create a personal connection and make it very hard to look away. That is what Joey tried to achieve with his work. As far as the ideal drones to use in conflict areas, Joey recommends using the lightest and easiest drones. Even the Inspire with its higher image quality is huge and comes in a large case. At times that was simply too much. 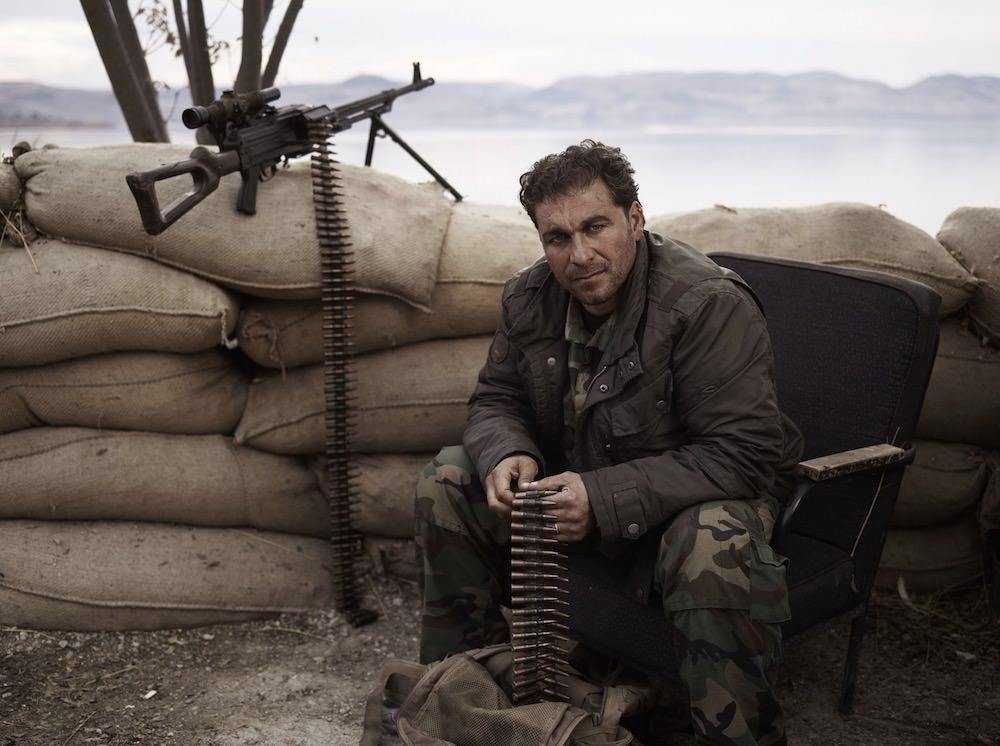 Mohammad Abo Adel, a General Commander of the rebel group Jaysh al-Thuwar, sits by the Euphrates River. Mohammad wears the uniform of a Syrian Arab Army soldier, but as a defector, his old badges have been removed. Early in the Syrian revolution, he had taken up arms with friends from his village and revolted against the forces loyal to Syrian dictator Bashar al-Assad. Now, the war has evolved and grown in complexity, and rebel groups find themselves waging war against each other instead of finding common cause against the Syrian regime. Photo by Joey L.

Joey L. is a photographer and director based in NYC. He spoke at Hardwired NYC in January 2018, about using drones to capture aerial footage of war zones in Iraq and Syria. Hardwired NYC is a monthly event in New York covering the intersection of hardware and software (Internet of Things, 3D printing, robotics, etc.), hosted by Matt Turck, a partner at FirstMark Capital.