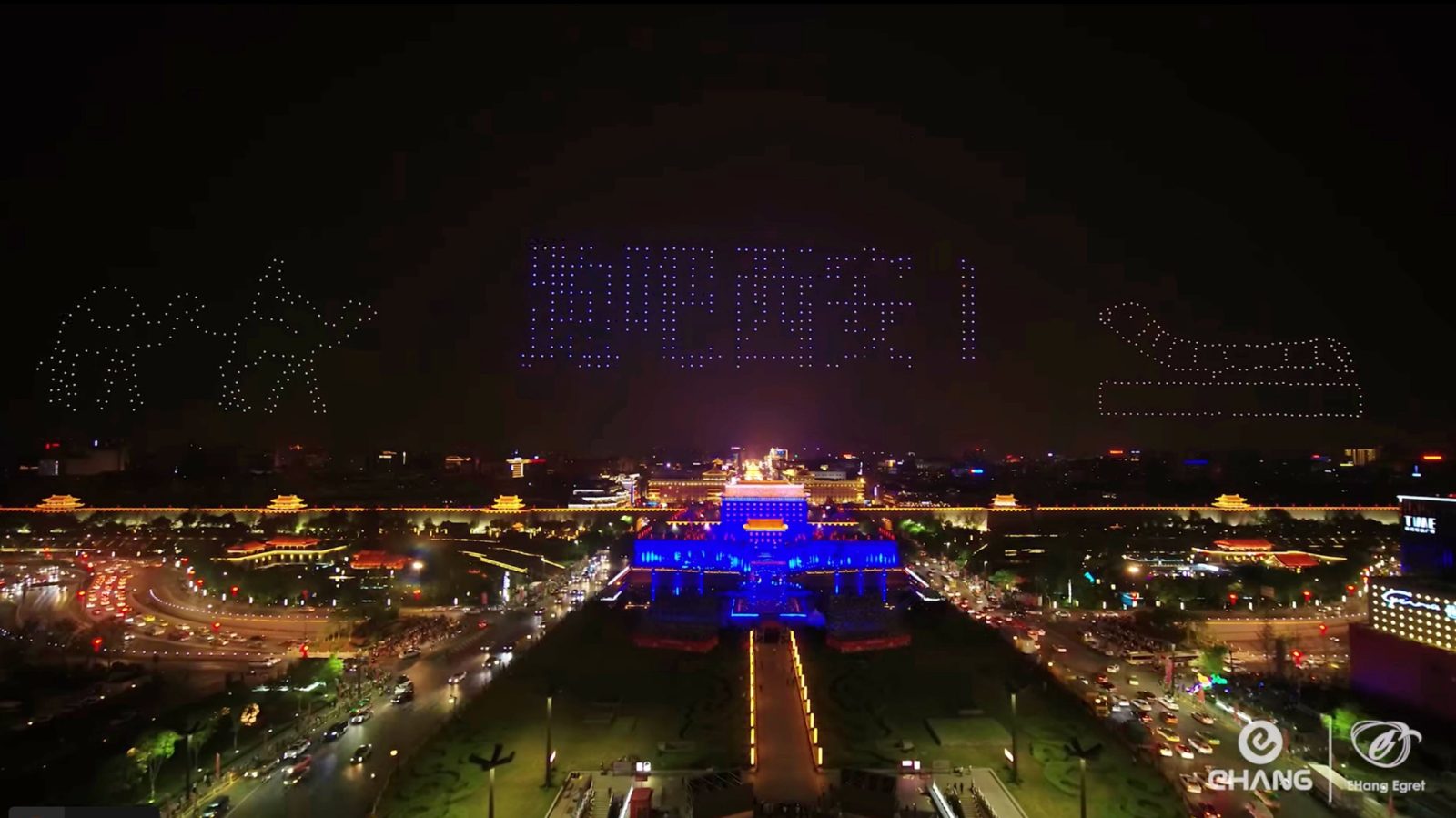 Chinese Ehang, a name you may recognize from their flying taxi, just broke the Guinness World Record record for largest drone display with a fleet of 1,374 drones at a Labour Day show in Xi’an, breaking Intel’s previous record of 1,218 drones flown during the 2018 Winter Olympics in Pyeongchang, South Korea. During the first rehearsal flight, all went well and Ehang was able to secure the record, however, during the live performance on May 1st signal interference from the audience may have caused some drones to break formation and some even fell out of the sky.

Guangzhou-based, Ehang set a new Guinness World Record for the “most number of unmanned aerial vehicles airborne simultaneously” during a rehearsal flight. During the rehearsal flight in Xi’an, which is the capital of Northwest China’s Shaanxi Province, the company flew a staggering 1,374 drones over the 600-year-old city wall. The drone show took about 13 minutes and the unmanned aerial vehicles were spread out over more than a kilometer.

During the actual live performance during the Labour Day show, things did not go as well. According to Gizmodo, Ehang Egret CEO, Shi Zheyuan had already warned the there may be signal interference from the audience, which could pose problems for the drones. It seems that his prediction came true as some drones broke the formation and even fell out of the sky. This caused some empty spots in the spelling of the Chinese characters for “Running Xi’an”, “New Era” as well as other parts of Ehang’s show, according to the South China Morning Post.

One of the more remarkable errors was the incomplete showing of the number “1374”, which represented the actual number of drones in the air as well as the length of the 13.74-kilometer long wall of Xi’an.

According to an announcement from the Ministry of Finance, Ehang was paid 10.5 million yuan ($1.6 million USD) to put together the record-breaking performance during the Labour Day show. Ehang’s Egret drones were flying 260 meters above Xi’an city wall in a formation that spanned 1,200 meters in length and 100 meters deep.

Ehang is said to be preparing an explanation for the drone mishap that is expected to be released in the next few days.

Now, impressive as Ehang’s record-breaking drone show may be, the record is unlikely to stand for very long, as I have just heard from an Intel employee that the chip-making tech giant is preparing a show with 1,500 “Shooting Star” drones for their upcoming 50th anniversary in July of this year.

What do you think about drone light shows? Let us know in the comments below.